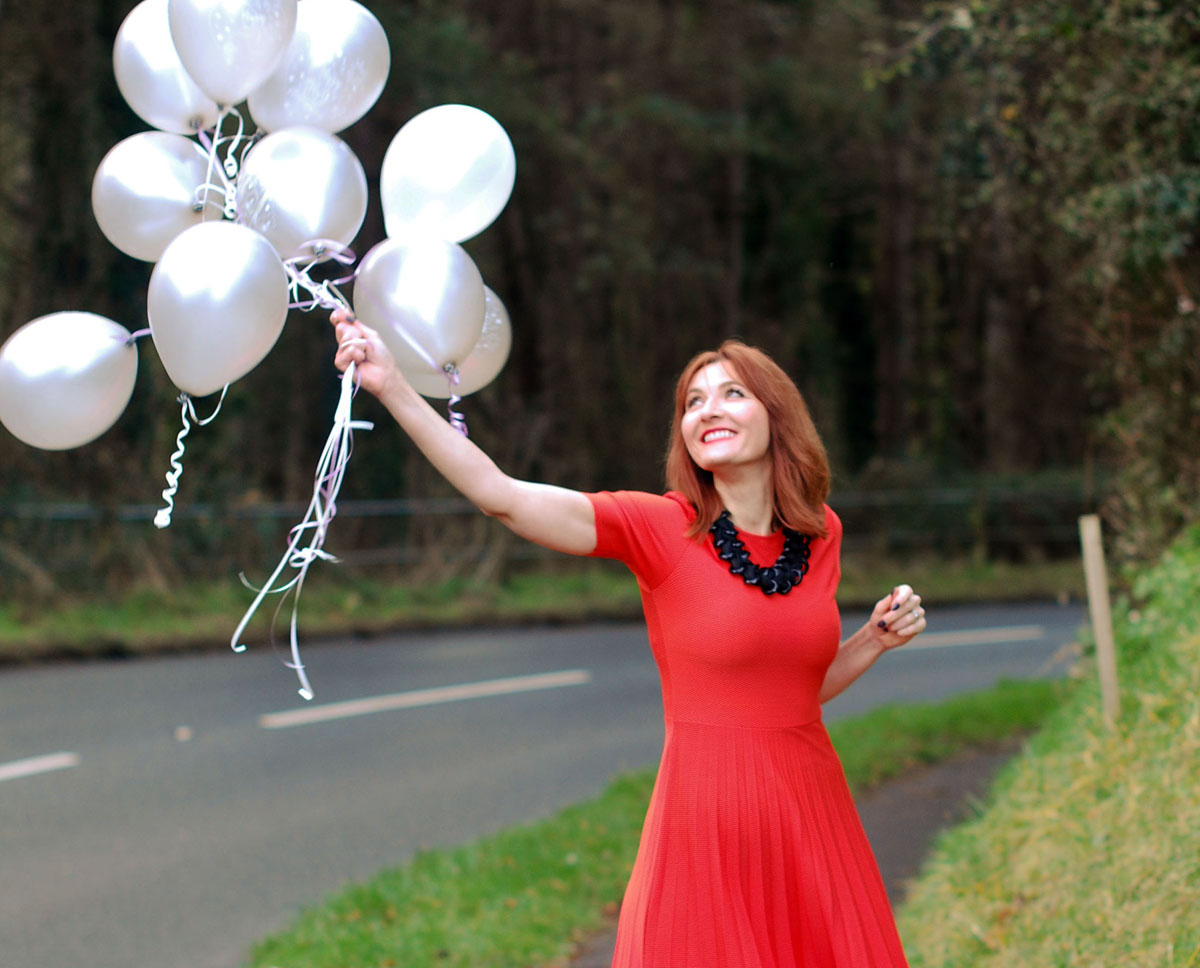 This is an extra post for the week – I don’t normally publish on a Sunday – but like my annual bloopers and outtakes post, I always have a little bit of a retrospective look back at the past year when my blogiversary rolls around. So go grab yourself a cuppa and get comfy, I’m going to tell you a story…

As some of you may know, I started my blog on my 39th birthday as a one-year project to see if I could improve my style in the run up to my 40th. My fortieth arrived, and as I was enjoying blogging so much I simply decided to carry on with Not Dressed As Lamb as a personal style blog, throwing posts about health and beauty, ageing issues and lots of musings into the mix.

Within two years I’d given up my job as a Sales & Marketing Manager to go full-time with the blog. If starting the blog was the best decision I ever made, then deciding to do it as a career was an even better one.

Six years on from when I first hit “publish”, I’ve modelled for Fever London.

I’ve worked with iconic brands such as NIVEA, Jaeger and Avon.

I’ve been shortlisted for three years in a row for a UK Blog Award, and won on the third attempt.

Yet despite all the amazing things that have happened, this time last year was probably one of the worst career-wise for me.

The financial year from hell

I came *this* close to packing it all in because despite having some great collaborations coming in, I was heavily dependent on the money from those collabs. And then I got stung for a huge sum of money from three different people/businesses – basically I just didn’t get paid – and all my savings that had been keeping me going up to that point had gone.

A year ago the realisation that I may well have to give up blogging and go back to working a 9-5 finally sunk in. It could only have been a few days before the mortgage and all the rest of the bills were due to come out of our account – with no pay packet from me going in – when I got paid by one of my clients. So I was saved for that month. And luckily I earned just about enough the next month to keep us tied over for another four weeks.

Gradually, more jobs started coming in. It was a nice feeling to be in demand and as it was then autumn, brands wanted AW16 content.

Christmas 2016 came and went, and what was coming in from collaborations was ticking over nicely. It seemed the days of being worried sick about how we were going to pay our bills were becoming a distant memory. However what was coming in wasn’t enough to be able to afford the August 2017 US east coast holiday we’d been planning for several years (to see the total eclipse), so we were still feeling the effects of 2016’s financial crisis well into this year.

Then something amazing happened: I WON at the UK Blog Awards in April of this year. I was the Individual Winner in the Fashion & Beauty category, after three years of trying. I was absolutely stunned and still, to this day, I can’t quite believe I actually won that night.

The previous year, which had seemed so utterly and completely hopeless, was now a bit of a distant memory because I know don’t whether it was just coincidence or a direct result of the win, but within a very short space of time the offers of work started to come flooding in. I basically haven’t stopped for breath in the past few months, it’s been that crazy.

So to cut (what is becoming) a long story short, this financial year is set to become my best yet, at least it will be if the rest of the year continues as it started.

Despite cancelling our US holiday we’re going to do it in September 2018 instead. Looking on the bright side, we may be missing the eclipse (the original point of the holiday) but it should be – in theory – a tiny bit cooler and less full of British tourists and their families, plus we now have an extra year to plan it.

I’ve also got myself a fantastic agent. If last year hadn’t gone so wrong our paths wouldn’t have crossed, so I had to go through that sh*tty period in order to end up in the good place I’m in today.

So there you have it: What a difference a year (can) make(s). Keith and I have now reset our sights on moving back to the South East hopefully sooner rather than later, rather than it just being a pipe dream.

I might be able to afford to buy that new bed I’ve had my eye on for since forever.

And I’m even considering getting a cleaner – just someone who can keep on top of the basics of the housework for us – because at the moment all our spare time together is spent doing housework and I’d rather be out enjoying life.

And that is exactly what I plan to be doing today – enjoying my birthday with my man and my dog, having a pub lunch at a dog-friendly establishment and going out to enjoy the country air.

And the moral of the story is: If things seem like they couldn’t get any sh*ttier, then you just gotta hold tight until they pass, for things DO and things WILL change. You’re never quite sure what the future will bring, but that’s what I love about birthdays, and blogiversarys – they’re a time for reflection as well as celebration.

And as I love birthdays so much, I’m going to say it… HAPPY BIRTHDAY TO MEEEEEEE!!

HAVE YOU HAD AN ANNIVERSARY OR BIRTHDAY THAT MADE YOU REALISE JUST HOW MUCH YOUR LIFE HAD CHANGED IN THE LAST 12 MONTHS? TELL ME IN THE COMMENTS OR TWEET ME @NOTLAMB! 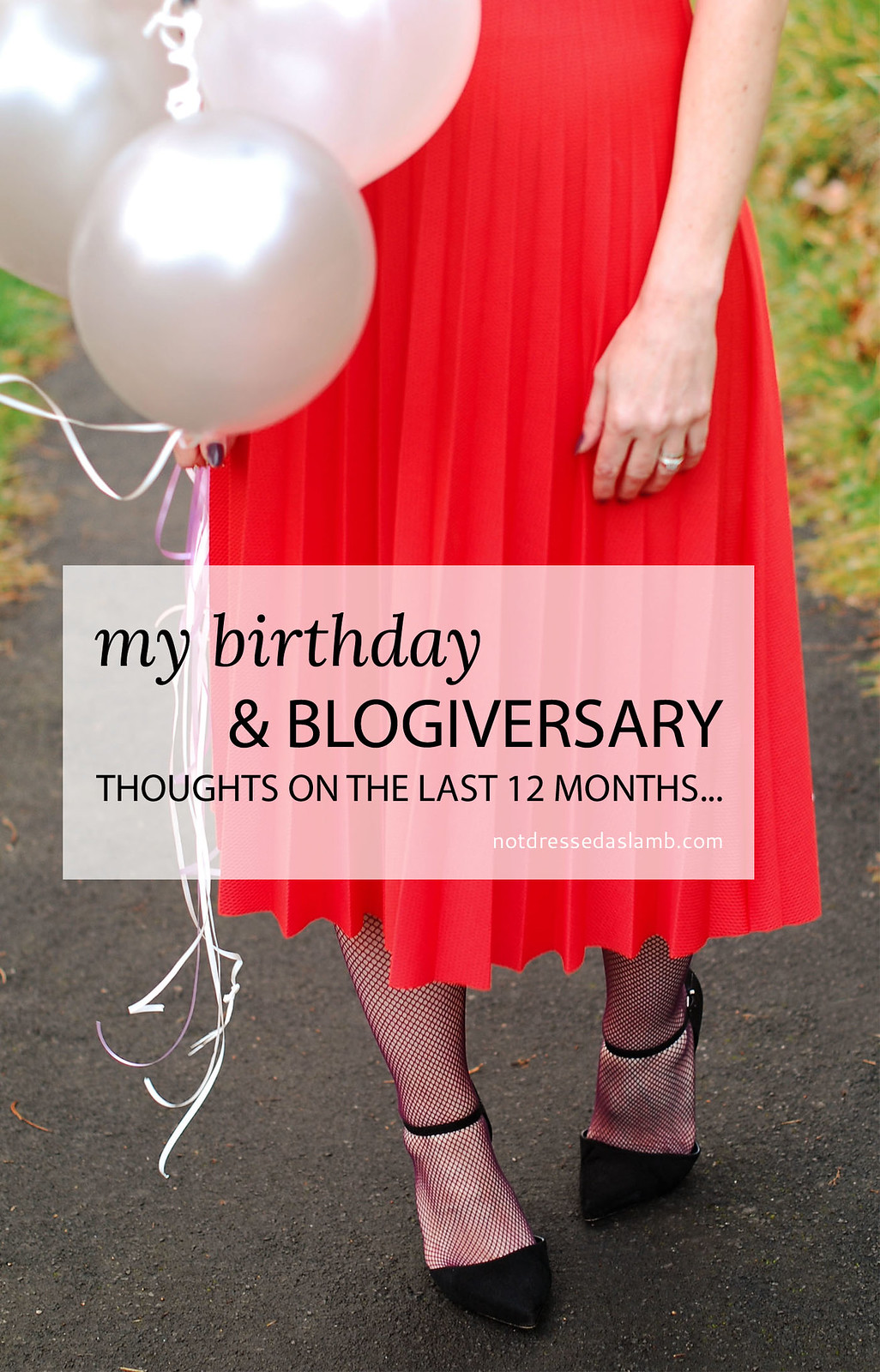