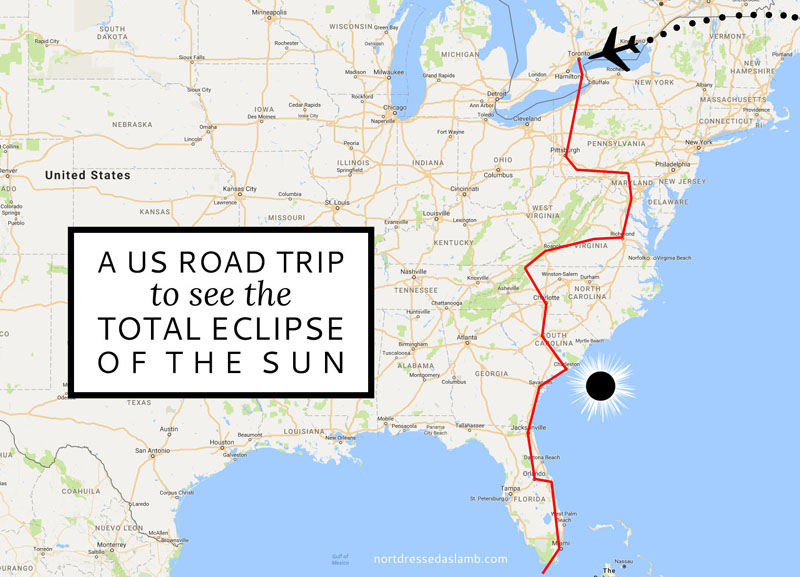 It’s now February, so that means it’s another month closer to our US east coast road trip to see the total eclipse of the sun in August this year!

This trip has been in the pipeline for many, many years – in the last 18 years or so the UK has had a couple of partial sun eclipses, but each time (as is typical of UK weather) it’s been mostly obscured by cloud. So after the last one in 2008, the husband and I decided to look all the total eclipses in the world that would take place in the next 10 years, see where there was one in a place that we could take a holiday, and plan a trip around it.

August 2017 right across the centre of the US from west to east came up, so we decided that would be the one.

So for nearly nine years we’d been saying, Yes, we’re going to the States in 2017 to see a total eclipse! We’re going to do an east coast road trip! – and then all of a sudden last year it became a little more real when we were then saying NEXT year we’re going to see the eclipse… It then becomes a little frightening (but in a good way).

So the map above shows only a very, VERY rough route of all the places we’re going to go just for the image for this post (I haven’t even followed the roads, as straight lines were easier to create on Photoshop!) but it’s going to be two and a half weeks of visiting so many places we’ve always wanted to go. For example we’re going to…

… and probably many, many more places in between. It’ll be part plane, part road trip and undoubtedly very, very hot and tiring (WHY did the eclipse have to be the middle of August?!) but we’re sooooo excited about it. We never get properly hot weather in the UK so I somewhat relish the weather being almost unbearably hot on holiday. Six years ago we did a west coast road trip (July at the Hoover Dam was the hottest temperature I’ve ever experienced in my life) and absolutely loved it – my military-style planning skills knew no bounds so I’m confident we’ll fit in everywhere we want to see again.

Are you on the route for a meet up?

Obviously if you’re on the way let me know – as I said the route isn’t 100% set in stone but I’d love to meet up with any bloggers who are nearby. I know a few of you live that way so I’ll be contacting you in the near future to see if you may want to meet up (or if anyone wants to organise an informal blogger meet up please let me know and count me in)!

So all that’s left to say is… LET’S GET THIS [LINK UP] PARTY STARTED!!

PLEASE be kind and leave a link somewhere on your post, and share your post using the hashtag #SaturdayShareLinkUp – if you tweet your link with the hashtag and tag me in @notlamb I’ll retweet it to my followers for you 🙂

WHAT’S BEEN THE HIGHLIGHT OF YOUR WEEK THAT YOU WANT TO SHARE? TELL ME IN THE COMMENTS OR TWEET ME @NOTLAMB!