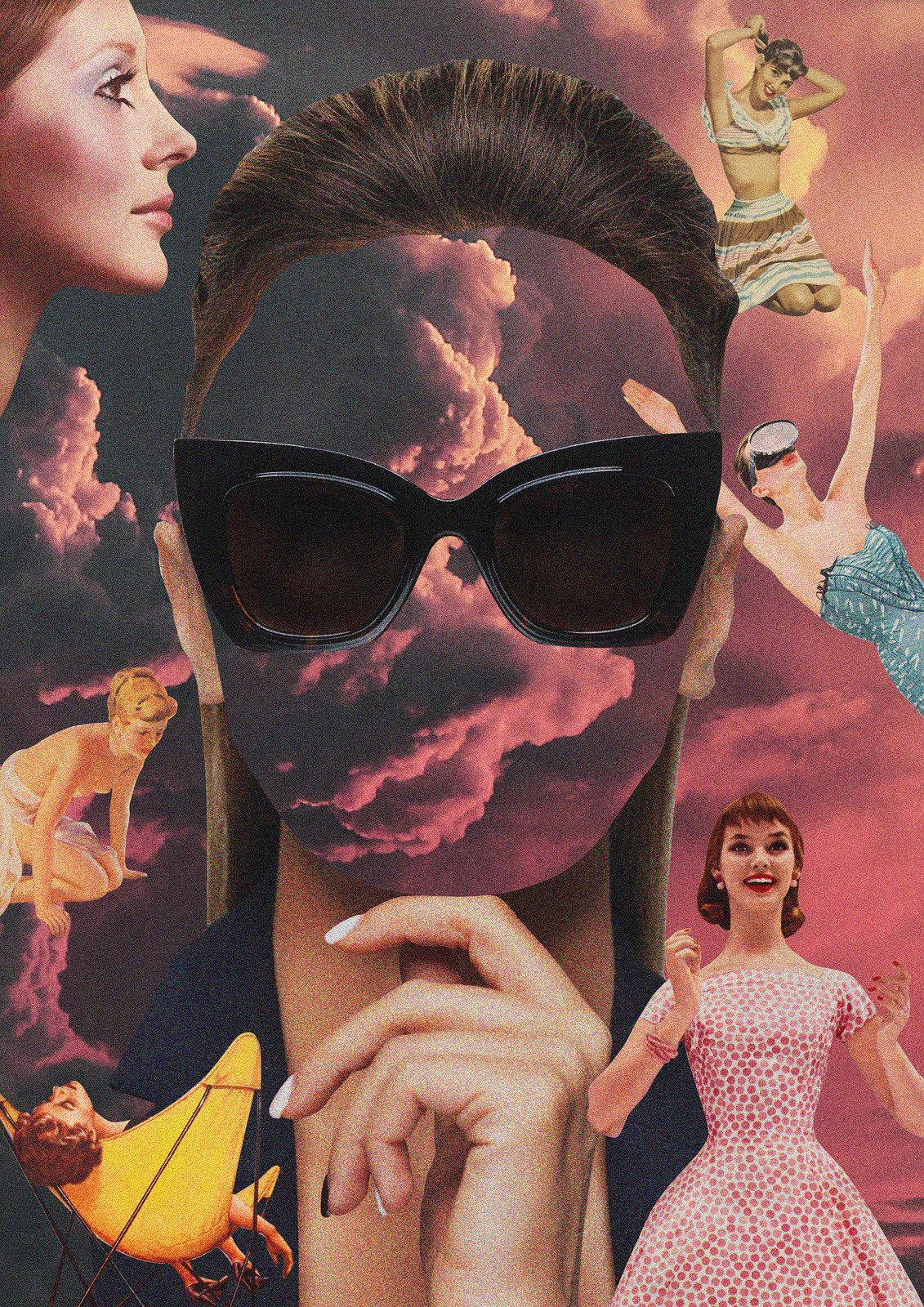 I knew I’d be writing this at some point: part one of my menopause journey. Or should I call it an ordeal?

As I write this I’m itching at the minuscule plaster still in the crook of my elbow, stuck there after yet another blood test was taken this morning at the doctor’s surgery.

In a nutshell, I have felt like SHIT for ages now. It’s the best (and only) way to describe it. One of two things has happened: I’ve either got something quite wrong with me health-wise, or perimenopause has hit me like a [freight] train. And by that, I mean a train that’s been waiting for me at the station for a while now. It’s been on the departures board for ages but they’d not yet announced the platform number.

I think that the platform number was announced sometime around Autumn 2021. And without warning… WHAM. The ‘Destination Menopause’ train left the station and hit me with everything it had. Okay, I’m done with the train analogies.

And when I say something wrong health-wise, it’s both physical and mental. One affects the other in a neverending circle of wanton viciousness. I’ve been to the doctor and with everything that’s going on, she’s a little worried too… hence, the blood tests. We’re ruling things out first.

So I want to know if there IS any sort of underlying health issue because recently I’ve got to the stage of “All of this can’t be perimenopause, can it? ALL these issues?”. I don’t want to leave all my various ailments to chance by saying “Oh darling, it’s just the change of life” – and then finding out that it was actually something else (quite serious) that’s caught me out in the 12 months leading up to my 50th birthday.

Never in a million years did I think I’d ever feel this shit in my life (I thought that when my mental health was poor it was bad enough). And here’s a caveat… I’ve used the word shit A LOT in this post. Let’s just say I’m talking shit here ; -)

Without wanting this post to be too depressing (sorry!), I’ll talk briefly about how I’ve felt and what’s been wrong. And then I’ll address perimenopause. Gird your loins…

In the last nine months or so, this is what’s been happening/how I’ve felt:

So far, an underactive thyroid has been ruled out (it wasn’t even borderline, it was completely normal). And a few other things like my liver, but it was my thyroid that I really thought was causing the weight gain. An underactive thyroid apparently also causes injuries to take a long time to heal – after both a friend and my chiropractor mentioned the possibility of thyroid issues I put the two together. It honestly would have explained everything… so I’m baffled.

Ergo, more blood tests this morning, and next is an appointment to see the doctor in person.

And in case anyone is wondering: no, I don’t eat takeaways every night. (I can’t even remember the last time we got a takeaway.) Yes, I’m capable of eating several biscuits in one sitting and yes, I’ll always have a slice of cake when offered – but this is only ever at other people’s houses. I don’t drink fizzy drinks or wine (EVER), I rarely keep snacks in the house. I’m also well aware that some healthy foods – a huge fruit salad with mango, pineapple and melon, or a large handful of dried fruit and nuts – are calorie-dense. I know that large quantities of those things, eaten on a regular basis, are going to lead to weight gain.

So yeah – I’m no saint/health freak, but my “base” diet is pretty balanced with lots of veg and some fruit (mostly berries and apples), little to no red meat and reasonably devoid of saturated fat. I just add naughty stuff on top, and often eat too late at night.

My perimenopause symptoms – so far

Obviously, there are a few things that I know for a fact are down to perimenopause. My periods haven’t stopped but they last barely two days and can be anything from 19 to 32 days in between. Their erratic nature is (WA-HAY!) sooooo much fun.

My worse symptom so far has been the night sweats. They were THE WORST. I’d go to bed freezing cold, then wake up in the early hours so overheated and drenched that my fingers were often severely WRINKLED from resting them on my tummy or chest in all that soaking, dripping sweat for hours. (Apologies if that’s TMI but you may as well know the extent of how bad they were.) I had to sleep on a thick towel to prevent the sheets from needing to be changed every day.

And all the other health issues? I don’t know whether I can attribute them to perimenopause, circumstances – or both. One thing that WAS positive, though: I saw my GP earlier this year and she prescribed HRT [patches] straight away for me, no questions asked.

(Well, apart from the usual ones she’s pretty much obligated to ask as my general practitioner, but let’s just say that, unlike some stories I’ve heard about GPs, all the battle gear and tactics I’d prepared for the fight to get HRT weren’t needed. I wondered if it helped that she’s female and roughly my age? It’d be interesting to know in the comments what your experiences of asking for HRT were and what age/gender your GP is.)

Long ‘going onto HRT’ story short: I’ve been using the patches for about three months now, and the night sweats stopped almost immediately. An occasional hot, slightly sweaty night, but nothing like the previous tsunamis of perspiration I’d experienced before.

However, my low mood continued… in fact, it may even have got worse. Therefore, I wanted to investigate more than just blaming it all on perimenopause, especially as I’d heard so many women saying that HRT made them feel like a new woman.

Me? I felt worse than ever. Not because I was taking HRT, but it just wasn’t helping.

There are so many other factors that can easily be attributed to why I’m feeling so low at rock bottom. Without wanting to sound dramatic or depressing [er, too late Catherine…], it’s all become a bit much lately. I’ve had some awful skin issues which crescendoed in the worst-ever eczema attack that had me climbing the walls due to the itchiness and pain. I’ve had eczema before, but it was never as bad as this. A common cause of eczema is stress, so it’s hardly surprising that my ears, neck and chest decided to erupt in a flaming, itchy expanse of sore red skin and flakiness because YES, stress has been abundant.

All the other shit that’s been going down lately:

I’m sure I don’t need to go on.. you get my drift. Looking over at what I’ve written down seems like I’m being dramatic, but really, I just want to be given a break SOMEWHERE. Anywhere.

So is this perimenopause, depression, or something else?

This is what I’m hoping to find out at my doctor’s appointment – or, at least, rule something serious out first. Maybe I’m downplaying my perimenopause symptoms. Maybe I’m downplaying (possible) depression. As mentioned in my post last year about how my mental health was getting a lot better, I don’t think I’m someone who is predisposed to depression. I still maintain I’m a glass-half-full kind of person, but even glass-almost-full people will be broken at some point.

Edit 25/06/2022 ~ A few people have asked – here and privately – if I’ve had Covid. Without wanting to jinx myself(!): no, I haven’t. Which quite surprises me as just about everyone I know (with the exception of family with whom I’ve had the most contact) has had it. So that’s definitely not a contributing factor.

When you’re feeling physically shit it’s really, really hard to maintain a sunny disposition. It making you feel negative mentally is unavoidable (I wrote about that last year: how my mental health is inextricably linked to my physical health and fitness).

At the moment I’m keeping an open mind as to what it is I’m going through. Perimenopause? Very likely. Self-inflicted? Quite possibly. Something more serious and underlying? Hopefully not, but at least we’re looking into it.

Any of my symptoms sound familiar to you – for either you or a loved one? Let me know in the comments box below, then check out all my other posts featuring my mental health or general health and beauty.

P.S. I started writing this about 10 days ago and am currently at the detox retreat in North Devon which I’ve been to a few times before (it works wonders for both my physical and mental health). Although I mentioned our money worries I managed to sort something out to be able to go, it’s not something I need to explain (the bank I robbed didn’t need the money anyway 😉 ). When I write the follow-up to this I’ll of course write about how I got on during and after my stay – as well as what the doctor said…