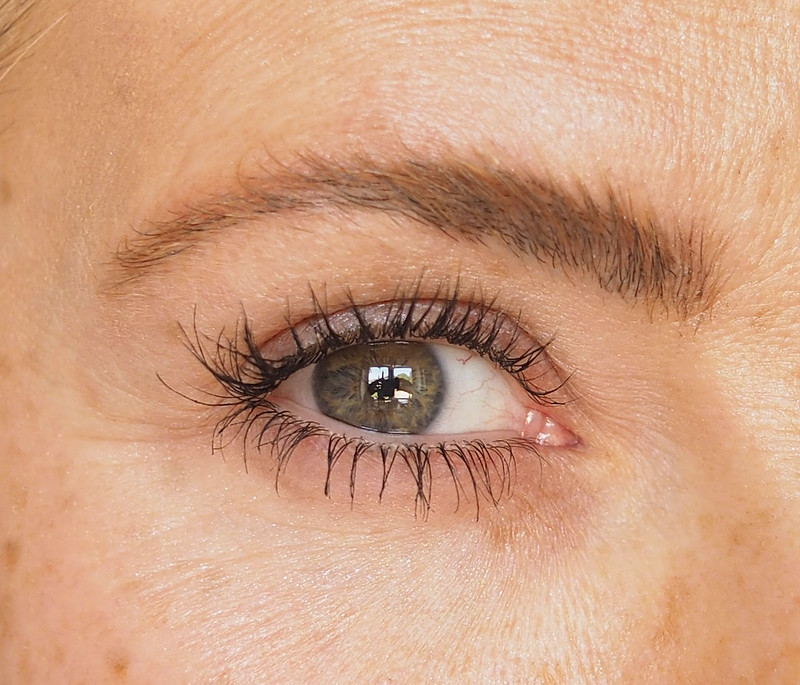 …And as well as getting long, LONG eyelashes, here’s my secret to getting thicker eyebrows, too.

And it’s no exaggeration – I’ve got both. In the space of a few months I managed to go from having very average-length, straight eyelashes and plucked-to-oblivion eyebrows (thanks, 1990s), to incredibly long, dark, NATURAL eyelashes and thicker (not perfect but much-improved) brows.

Both are an absolute revelation, and many people (both online and IRL) have remarked on how long my eyelashes are. In fact, one person – who had reason to look at my face very, very closely – didn’t actually believe that they weren’t extensions.

Want to know the secret?

Disclosure: This blog post uses some affiliate links (at no cost to you). Full disclosure

It’s all down to one product: Revitalash. (Well, it’s actually two products, Revitalash and Revitabrow, but both work on the same principle and both are by the same company. I’m sure you can work which does what.)

I’ll cut straight to the chase and proclaim that this is the best money I have EVER spent on a beauty product. Hands down, no contest.

To describe the effect this product has, I’ve gone from having that pale-eyed, I-need-mascara-at-the-very-least look, to a dark, looks-like-I’m-wearing-eye-makeup look. If I’m not wearing any makeup, it’s absolutely fine. I don’t feel washed-out or look like I’ve risen from the dead. The Revitalash has done more than made my eyelashes grow long: it’s made them grow (or at least appear to have grown) thicker, creating an eyeliner effect on my eyes.

That’s right: I look like I’m wearing mascara AND eyeliner. All. The. Time.

Added benefit: the product is cruelty-free.

And with any good review, I have Before & Afters. But first…

Revitalash: what is it and how does it work?

What can I say: it couldn’t be easier. It’s a tube of liquid serum (that was formulated by the founder of the company to help his wife’s hair growth who was battling breast cancer at the time) with a little brush at the end. You apply a thin line of it to the base of your lashes every night… AND THAT’S IT. I applied it religiously every night and, after a month I noticed my lashes were quite a bit longer. After two months, they were really long.

After three or four months, they were CRAZY, almost out-of-control long.

The rub (and of course there had to be one, didn’t there) is that this product is EXPENSIVE. I’m talking almost eye-wateringly expensive. A 3.5ml tube – which they say lasts up to six months – costs £110.00 direct from Revitalash*.

EEP. I won’t deny that I almost felt a bit sick spending that much when I first bought it. But the reviews were so good, everyone was saying that it was totally worth the money.

In layman’s terms, the way it works is by preventing hair loss. So, your lashes stay put for much, much longer (you’ll notice that you rarely have eyelashes drop out), and this allows them to keep growing. And because they’re not falling out as much and new ones are starting to grow in, then the lashes appear much thicker – you end up with a less sparse, denser lash-line.

My thoughts on the price versus the results?

For me, it’s a no-brainer. I already said that this is the best money I have ever spent on a beauty product, and I mean it.

So here are my eyelashes before and after – you can see that before they were average lashes. Barely visible. But look at them AFTER (and remember, this is WITHOUT mascara or ANY kind of eye makeup: 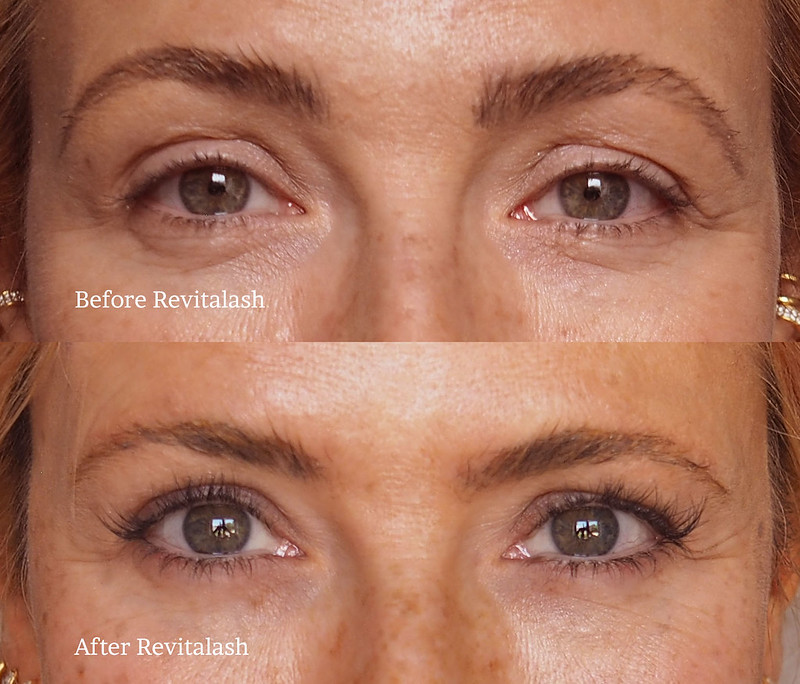 WHOOOOOOOOAH every time I see a before and after I just can’t believe it. I’m used to them being so long and naturally curly now, but when I see any old picture of me and notice my lashes, I see that I had hardly any to speak of. And then here they are WITH mascara, and even then it’s a very light application of a very light mascara (gird your loins): 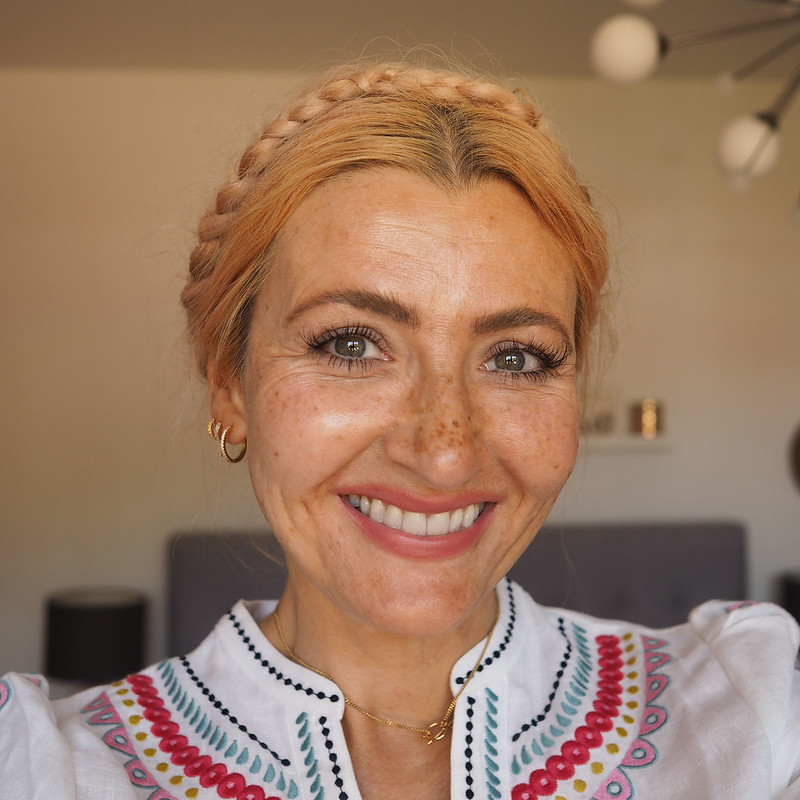 I’m still in shock every now and then at how beautiful my lashes are. They’re even a little unruly they’re so bloody long.

The best compliment I had was from the makeup artist who was doing my makeup for the L’Oréal advert we shot just before Christmas (I started using Revitalash in the first week of September, so I was well into the three-month length). She’d worked on my face, base and everything, for about 20-30 minutes, and the conversation went like this:

MUA: Would you like me to put any mascara on?

MUA: I didn’t think you’d want to damage your lashes

Me: Oh these are my natural lashes, they’re not extensions

MUA: What? They’re NOT your natural lashes, ARE they?!

Me: Yes, yes they are

MUA: All this time I thought you had eyelash extensions!? What’s your secret?

And there we have it – an MUA had been working closely on my face, much closer than anyone gets to me on a daily basis – for quite a while, and even SHE thought my lashes weren’t real.

Other than that, I regularly get comments like “Your lashes are INSANE“, “Are your lashes real?” and “Your eyelashes are so long – how?“.

Without mascara, my lashes look amazing (even with their natural curl I’ll still give them a quick, gentle curl with my eyelash curler, but that’s all they need to stay looking like that ALL DAY).

But WITH mascara, my lashes look INSANE. Better than any set of false eyelashes I’ve ever worn. Ever. (I’ve always thought that fake eyelashes look, well… FAKE.)

Here are the pros and cons of Revitalash so you can decide whether it’s for you:

So that’s Revitalash for insane eyelashes – what about Revitabrow for eyebrows?

Now although my brows haven’t undergone QUITE as dramatic a transformation as my eyelashes have, the difference is still remarkable. I guess how well it works depends on how thick your brows are naturally, how sparse they now are, and how much overplucking has affected them (if you succumbed to it in the 1970s and/or 1990s).

I plucked mine Drew Barrymore-style till they were a thin line in the early 90s. Shall we take a look at how bad they were in 1993…?

After the Eyebrow Shit Show that was 1992-1998 ish (thinnish brows continued on till about 2010, but the pencil line-style ones were, thankfully, pretty short-lived), I obviously tried to grow them back.

Guess what? They never really grew back to the full fluffiness they were before (what a surprise). The thicker part nearer my nose wasn’t so bad, but the “tail” part was barely thicker than one or two hairs deep. They’ve been patchy ever since, despite all my attempts to grow them out.

Here’s their Before & After: first, au naturel before I started the Revitabrow (note that I’d already been using Revitalash for a while when I took these so my lashes already look longer, plus I’m wearing mascara. Sorry if that confuses things). They were pretty sparse, pretty thin, and pretty awful. One brow plucked too far “in” so they weren’t even the same width. Basically, my brows were the one thing I couldn’t leave the house without ‘applying’ – I felt bare without them and my face needed the framing… secondly, the ‘after’, my brows now after nearly nine months of nightly applications: 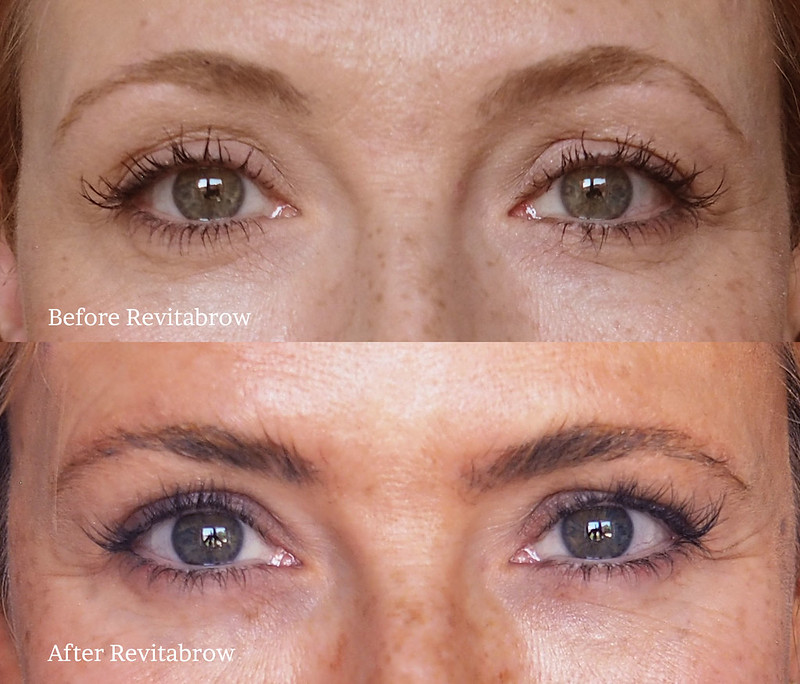 (Note that the difference in colour in my brows is due to me JUST having lightened them in the Before pic, the After shows them a few weeks after being lightened so the darker brow hairs are coming through.)

They’re not perfect, but I can leave the house not feeling weird “because my brows aren’t done”. I’m wearing NO brow makeup at all in either photo above. The only thing I’ve done is brushed clear brow fix gel through my brows to fluff them out (as I do daily) and curled my lashes.

For a long time I thought that Revitabrow hadn’t really had an effect. They’d improved, sure, but the thick, bushy brows I’d longed for hadn’t really happened. But the brow gel makes a huge difference, and the results are even better with coloured brow gel and one or two strokes of my miracle brow pen… here’s a brows-and-lashes-after-and-with-makeup photo again: 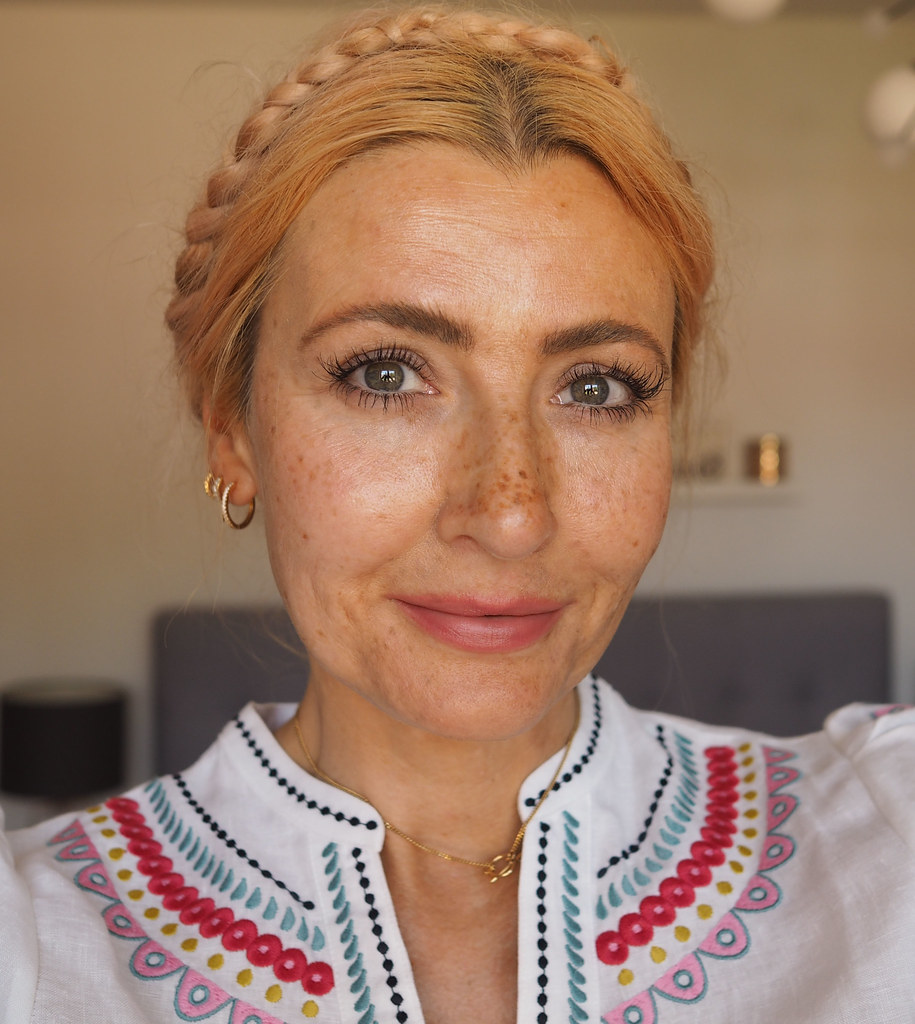 What’s happened (and it’s hard to see this in the photos, but they do exist) is that lots of little hairs underneath my brows have started growing again. You can see this better in the close-up picture right at the beginning of the post. Overall, my brows look generally “fluffier”.

And I’m really happy with the results. REALLY happy.

A caveat (and a way to get it cheaper)

Many people have said to me that they’ve also tried it [lash serum], but it had no major effect on their lashes. When I ask if they used the actual Revitalash product, they umm and aah and say, Hmm no, maybe not, it was called XXXX I think.

In the past I also tried a couple of other types of eyelash serum, and they had very little effect on my lashes. They ended just looking “quite nice” after a month or two of daily use. There’s a reason that Revitalash is so expensive, and that’s because it REALLY BLOODY WORKS. So it HAS to be that actual product for me.

I’ll let you decide whether this is the product for you. The cost IS very prohibitive, I know, but the amount of money I’ve saved by not wearing mascara every day means that the excruitating pain of the expense is lessened somewhat.

How to get the products quite a bit cheaper

That’s it, I think I’ve waffled on long enough… I’m so in love with my lashes and brows that I do find myself quite fascinated by them in the mirror (god help me and my newfound follicle-based vanity). Can you tell happy I am with my brows and eyelashes? Can you? CAN YOU?!

Have you tried Revitalash, or any other lash or brow serum? What were your results? And have I persuaded you to give Revitalash/Revitabrow a go? Let me know in the comments… 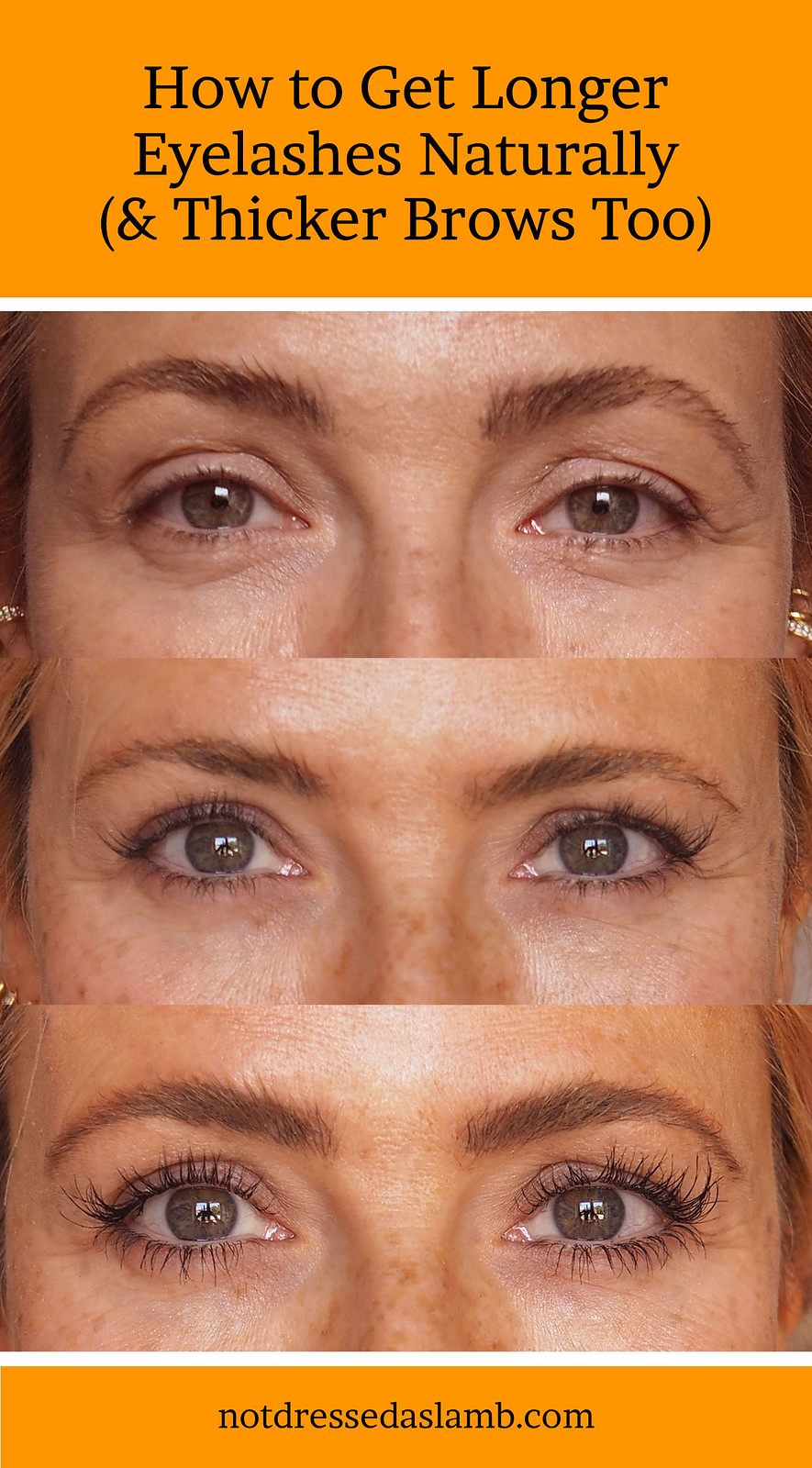