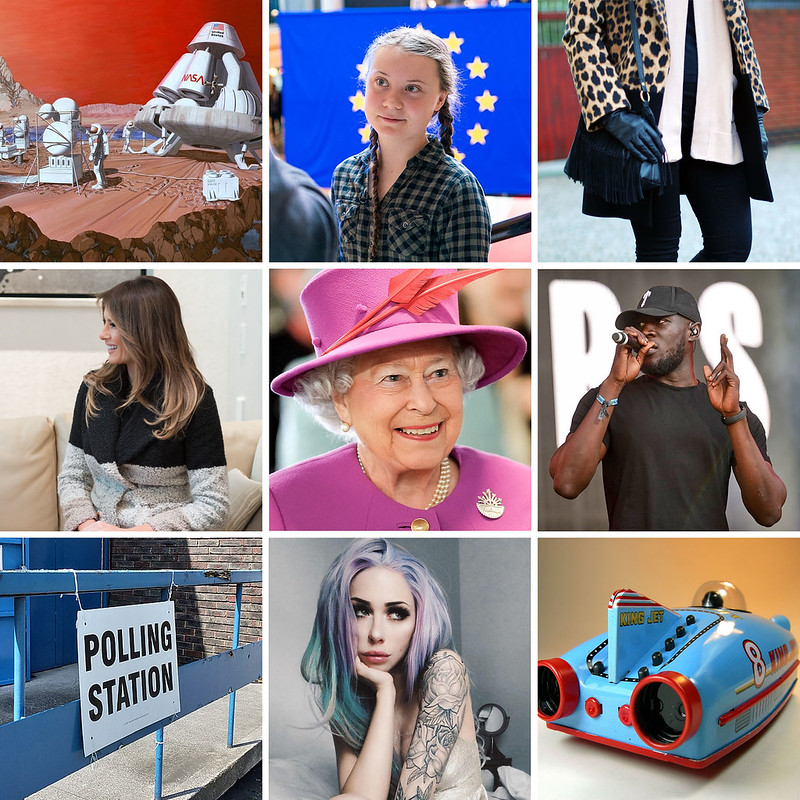 Welcome to a new decade – what do we think it’s going to bring?

Firstly – are we in the 20-20s? The two-thousand-and-twenties? The Twenties? No one’s really sure, nothing sounds quite right, but then “predictions for the next decade” are always laughable once that decade comes to a grinding halt. So after yesterday’s bloopers and outtakes, I thought I’d continue the tongue-in-cheek theme for one more day and present my 20 predictions for the 2020s.

None are meant to be taken seriously at all (please don’t think I really think these might/will/should happen), but judging by the events of the last 10 years some might not be so ridiculous in the end.

Referendum on toast, anyone?

(All images via WikiCommons; see credits below)

Becoming a ‘superfluencer’ will be the no.1 career choice for under 7s, though no one will be exactly sure whether it’s short for super influencer or superfluous influencer.

There will be a bidding war between the BBC and ITV to get former Prime Minister Boris Johnson either dancing on Strictly or eating cockroaches in the jungle on I’m a Celebrity Get Me Out of Here.

The UK will hold a referendum to decide whether you can leave a queue to pop to the toilet but still retain your place in the queue.

Greta Thunberg will become the youngest-ever UNSG (Secretary-General of the United Nations).

The next eyebrow trend will be thick lip gloss brows with marabou feathers stuck on top. They’ll be dubbed ‘Bou Brows.

Disney will buy more of the world’s largest companies, including Amazon, McDonalds and Uber. Big Macs will have pickles shaped like Mickey Mouse and Uber drivers will have to dress like Disney characters.

Simon Cowell will create The X Factor Does Coastal Retirement, where Simon, Nicole Scherzinger and Susan Boyle go round retirement villages on the British coast looking for the next Tony Bennett or Vera Lynn.

Donald and Melania Trump will star in an access-all-areas reality TV show on Netflix about their post-presidency life at home.

The first manned mission to Mars will happen at the end of the decade. It will be sponsored by Mars Bars, Matt Damon will provide the voice for the on-board AI robot and Bruno Mars will release Uptown Mars which will be in the charts for seven months – the length of time it will take for the astronauts to reach the red planet.

Stormzy will run for London Mayor in 2028 and win with a landslide majority.

The iPhone 42 will be the size of a flat-screen TV, cost as much as a Honda Civic and people will camp outside Apple stores for five months before its launch to be the first to buy one. But you still won’t be able to plug your headphones in it.

The UK will hold a referendum to decide whether chips should be covered in gravy or ketchup, and there will be a clear North/South divide in the vote.

Elon Musk will unveil Tesla’s new submarine hybrid car that will be transported at light speed through underwater tubes between continents.

Tattoos of whole-body leopard will be the next big trend as over 40 women outstrip demand at Zara for animal print.

At the end of the decade, Queen Elizabeth II will become the oldest member of the British Royal Family in history aged 103. Her Platinum Jubilee will be celebrated in 2022 with a concert headlined by 79-year-old Mick Jagger, 80-year-old Paul McCartney and 82-year-old Cliff Richard.

Cash and credit cards will be replaced by digital scent technology to allow us to pay for goods and services via our unique pheromones.

Generation Z will be renamed Generation S (for “selfie”).

Amazon Alexas and Google Assistants everywhere will rise up and conquer the human race.

The UK will hold a referendum to decide whether we should hold any more referendums in the future.

What predictions do you have for the next decade? Tell me in the comments!