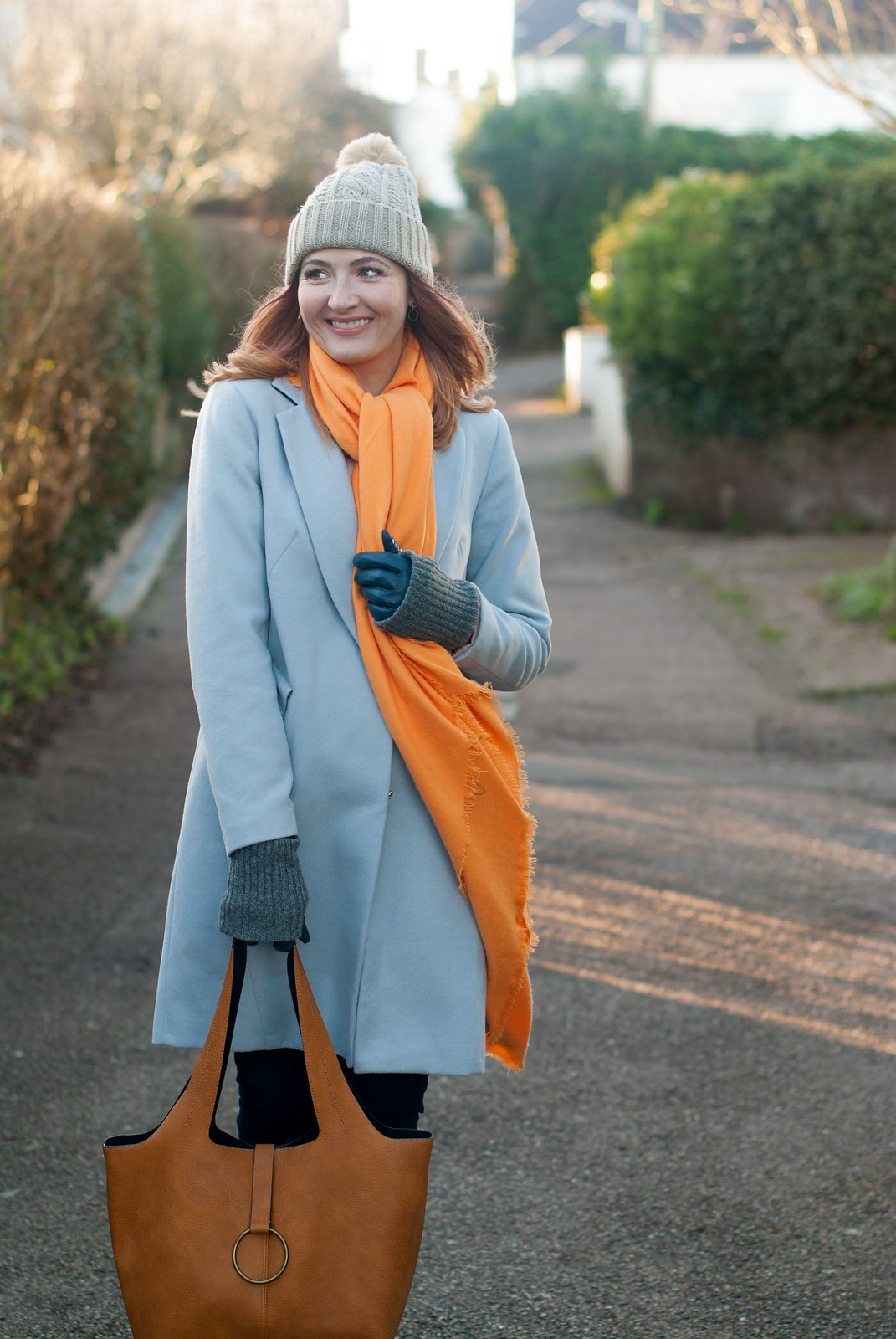 My winter style often consists of me breaking out the brights – it’s especially apt for today’s outfit post considering today is what they call Blue Monday, the most depressing day of the year apparently.

Blue Monday is the term they (they?! who are they?) give to the Monday in January before payday. No one’s been paid since mid December, Christmas credit card bills have come in, the weather is miserable, the New Year celebrations are most definitely over… you get the point. To be honest it’s all a load of nonsense – you can make any day great if you want to – but my trick for beating the winter blues is to pile on the brights, because who doesn’t feel better wearing a bold tangerine orange scarf with a beautiful warm pale grey?

However, I’m going to contradict myself right away. For me personally it’s kinda weird that today of ALL days is Blue Monday, as right at this very minute I may either be recovering from an operation or I may well be on the slab being poked and prodded and hopefully(!) having a big cyst taken out of me. Just over a week ago I wrote about the final medical diagnosis for my leg pain that has plagued me for two years, and today I’m having the cyst removed from my abdomen which has been pressing on the nerve and causing all the pain. (At least we HOPE that’s the cause of it.) 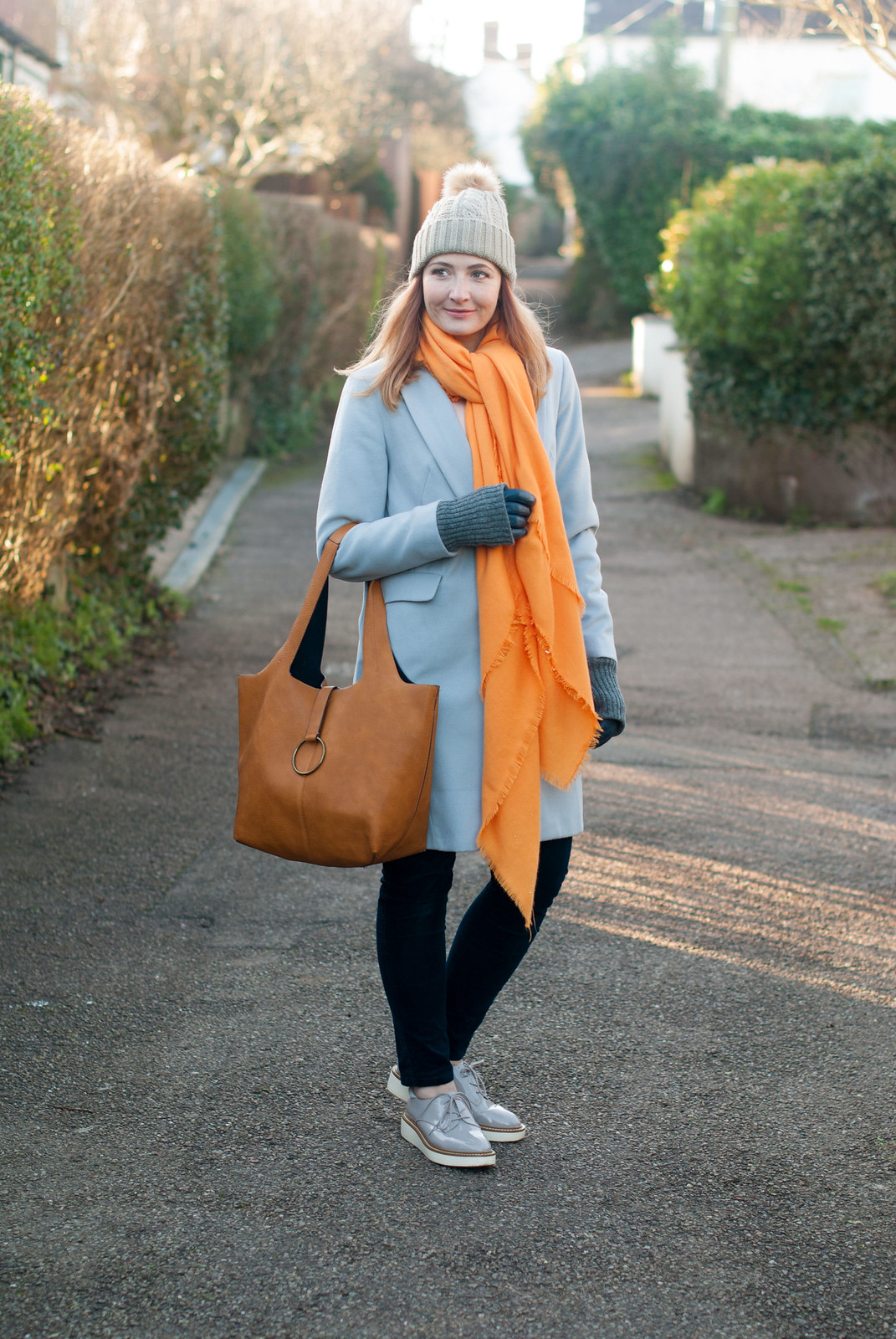 I’ve received SO many well wishes here on the blog and through social media – I can’t thank everyone enough for the kind words! I’ve asked my assistant (i.e. my lovely niece) to post something on my Facebook page and send a tweet on my behalf this evening about how it went as many of you have asked for an update if possible… it’s so lovely that you’ve all been so concerned, so thank you a million times over.

(If you haven’t read the post about my operation: I’m booked in for keyhole surgery which would mean I’d have a recovery period of 7-10 days, but there is a chance I may have to be opened up for major surgery – they don’t know till they go in – and then it’ll be six weeks recovery. I won’t know which way it went till I wake up which is the most unnerving part of it all.)

So not only is it Blue Monday, but for me it’s also Operation Day. Or, Operation Leg Pain as I call it.

To add to my woes…

But just to make Blue Monday worse, I missed out on an opportunity on Saturday night that I don’t think I will ever, EVER get over. This is so major I don’t even know where to start… all I can say is, if you’ve got an opportunity to go out somewhere or have an invite for something, DO NOT PASS IT OVER BECAUSE YOU NEVER KNOW WHO MAY BE THERE.

What happened (if you saw my InstaStories on Saturday/Sunday you will know what I’m talking about) was that Keith had an invite to the opening of the new (as in brand new species) ichthyosaur fossil exhibit at the Charmouth Heritage Centre on the Jurassic Coast because he volunteers there at weekends. He also did the illustrations for the centre’s leaflet about the new find. The fossil was featured on last weekend’s BBC programme “Attenborough and the Sea Dragon“… you can guess where I’m going with this, can’t you.

Keith had a plus one and originally I was going to go, but because of my operation and imminent hospital stay I was SO behind with blog work, so I stayed home. Keith said it would be a private event with staff from the centre and a few local press. What he DIDN’T say was that anyone else might be there, like, oh I don’t know… a national treasure, someone who had worked for the BBC for about 60 years, someone known the world over, someone who is loved by EVERYONE when his surname is mentioned, someone who is synonymous with all things wildlife and making documentaries. 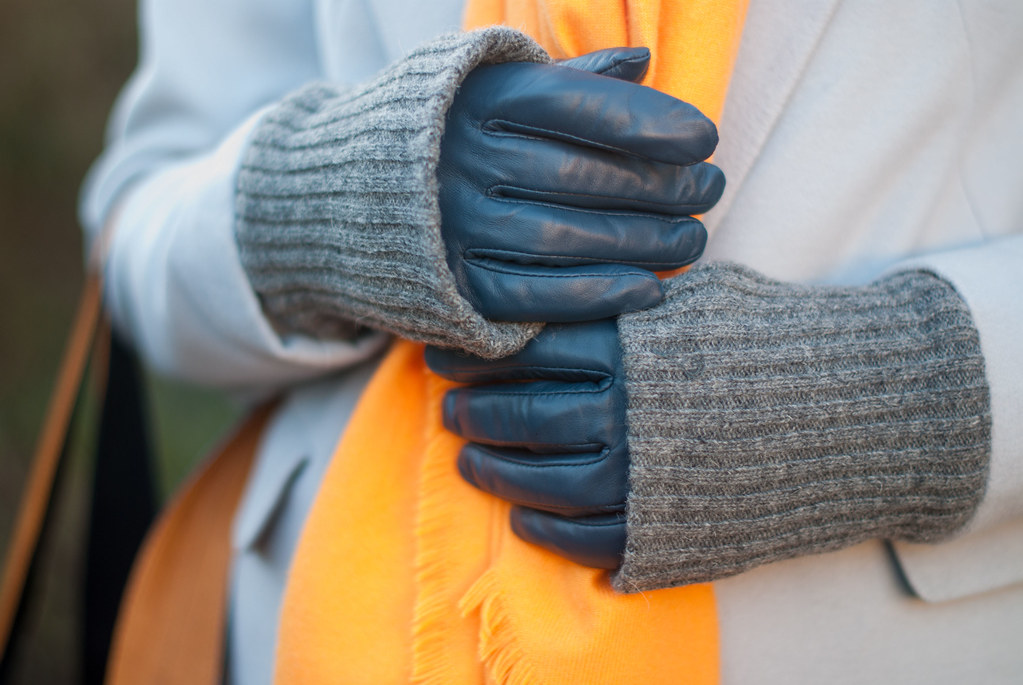 So anyway – Keith got home and VERY casually, after about 10 minutes of fannying about getting his shoes off and making a cup of tea and actually telling me very little about what the evening was like, just happened to say:

Now I’m sure that many, many people reading this may have had the same reaction as I did: My jaw dropped open, then there were a few seconds of me staring at his somewhat sheepish expression (that boy KNEW he’d done wrong), then I just burst into floods of tears. I was nothing short of inconsolable.

To be fair, Keith wasn’t told that Sir David had been invited, and no one from the centre knew for sure whether he was going to turn up, but in my eyes IT WAS ALL KEITH’S FAULT AND I HATED HIM. I had a chance to meet Sir David Attenborough and I didn’t take it, but Keith could have FORCED me to go, couldn’t he?! Keith was introduced to him, they had a chat, David said he loved Keith’s illustrations. I’d even told my family about the evening earlier on and said “Oh no, David Attenborough won’t be there…” when they asked.

I asked Keith why he bothered coming home at all, to be honest… 😉

In fact I’m going to stop writing about this now because I’m too upset about this missed opportunity and I have to go to hospital tomorrow (“today” to me being Sunday writing this in advance) and I need to pack my bag. And in case you’re wondering about what he was like, he was just as you’d hope and expect – apparently he was absolutely wonderful. One of those ordinary but extraordinary people, if you see what I mean.

So… do add your outfits to this week’s link up – details below!

HAVE YOU EVER MISSED A GOLDEN OPPORTUNITY LIKE I DID TO MEET SOMEONE YOU’D ABSOLUTELY LOVE TO MEET? COMMENT BELOW, OR TAKE IT TO TWITTER @NOTLAMB! 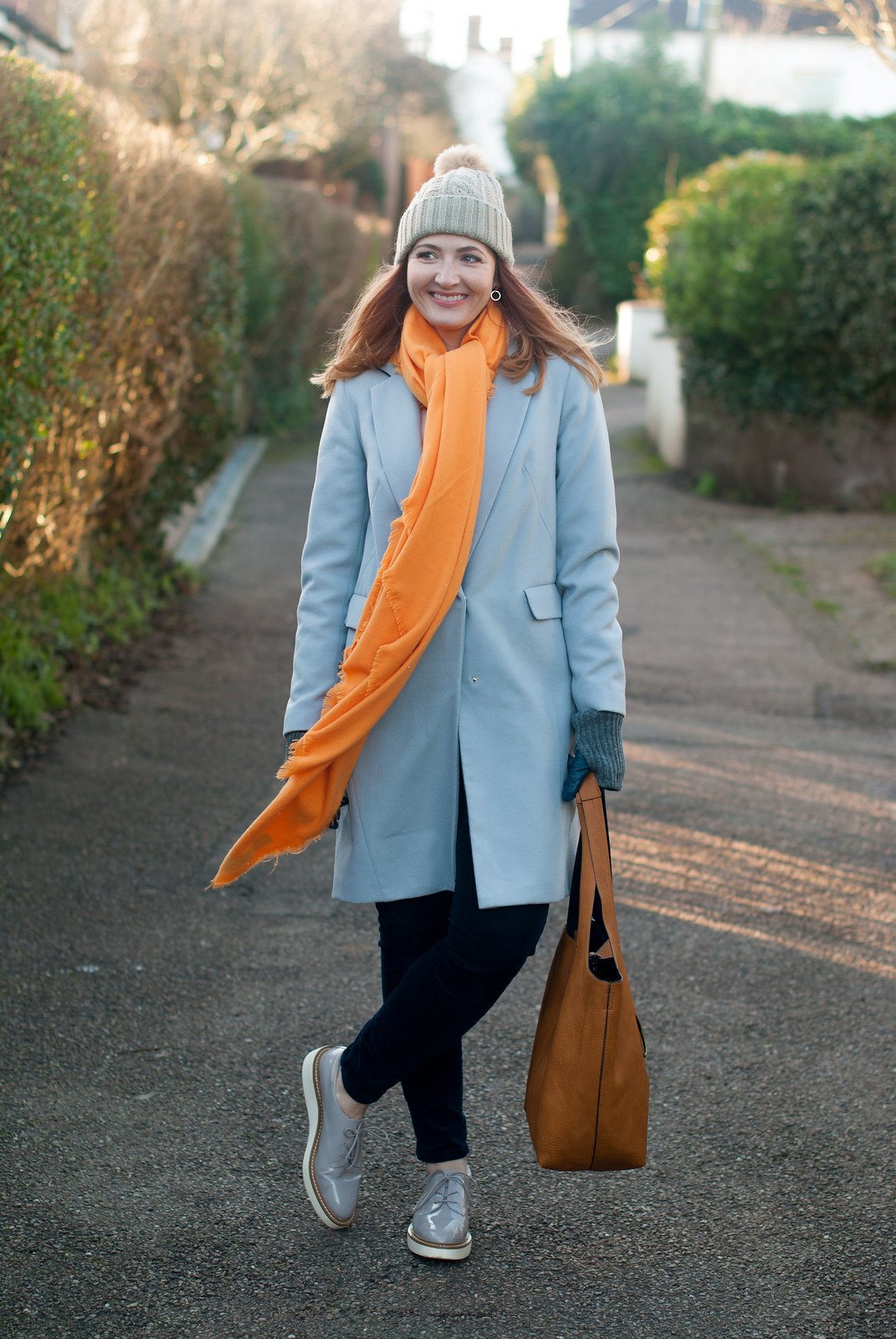 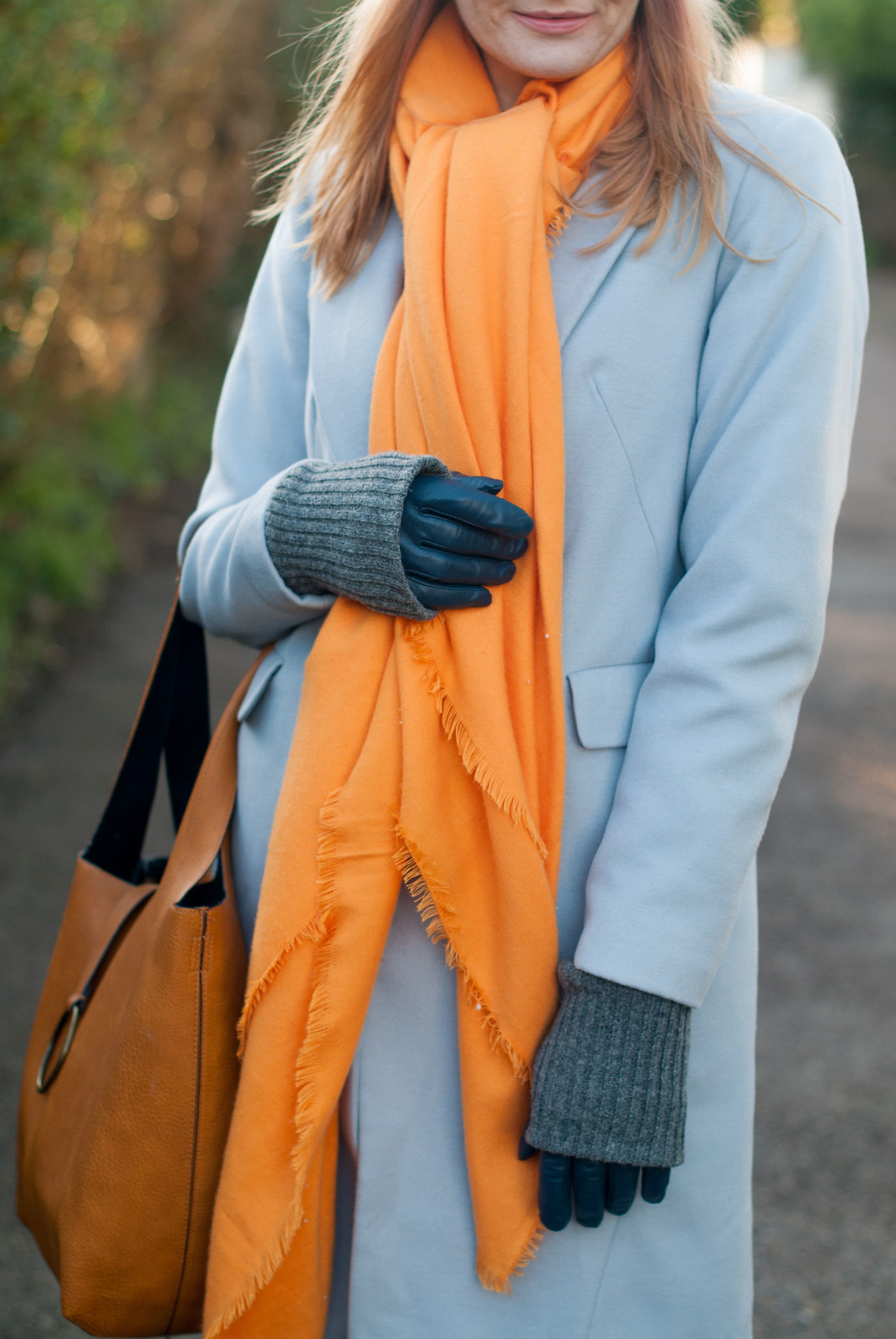 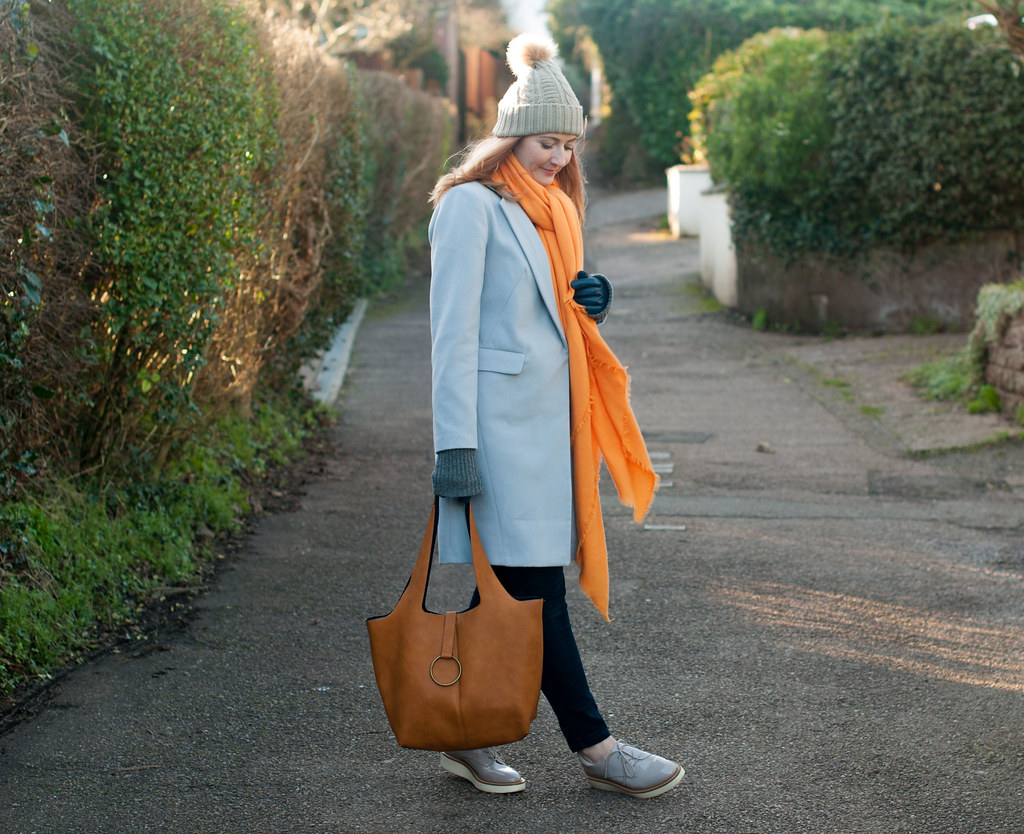 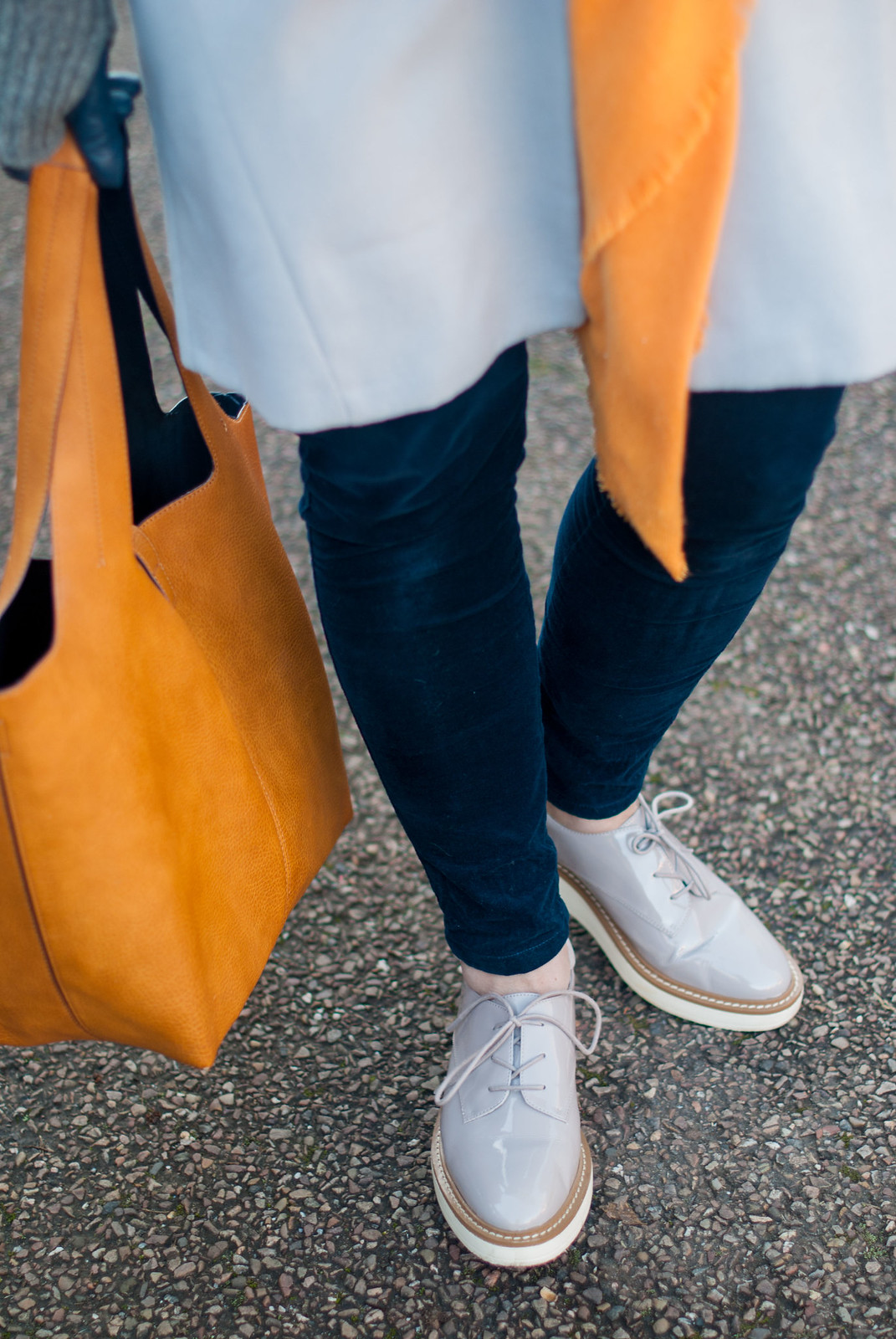 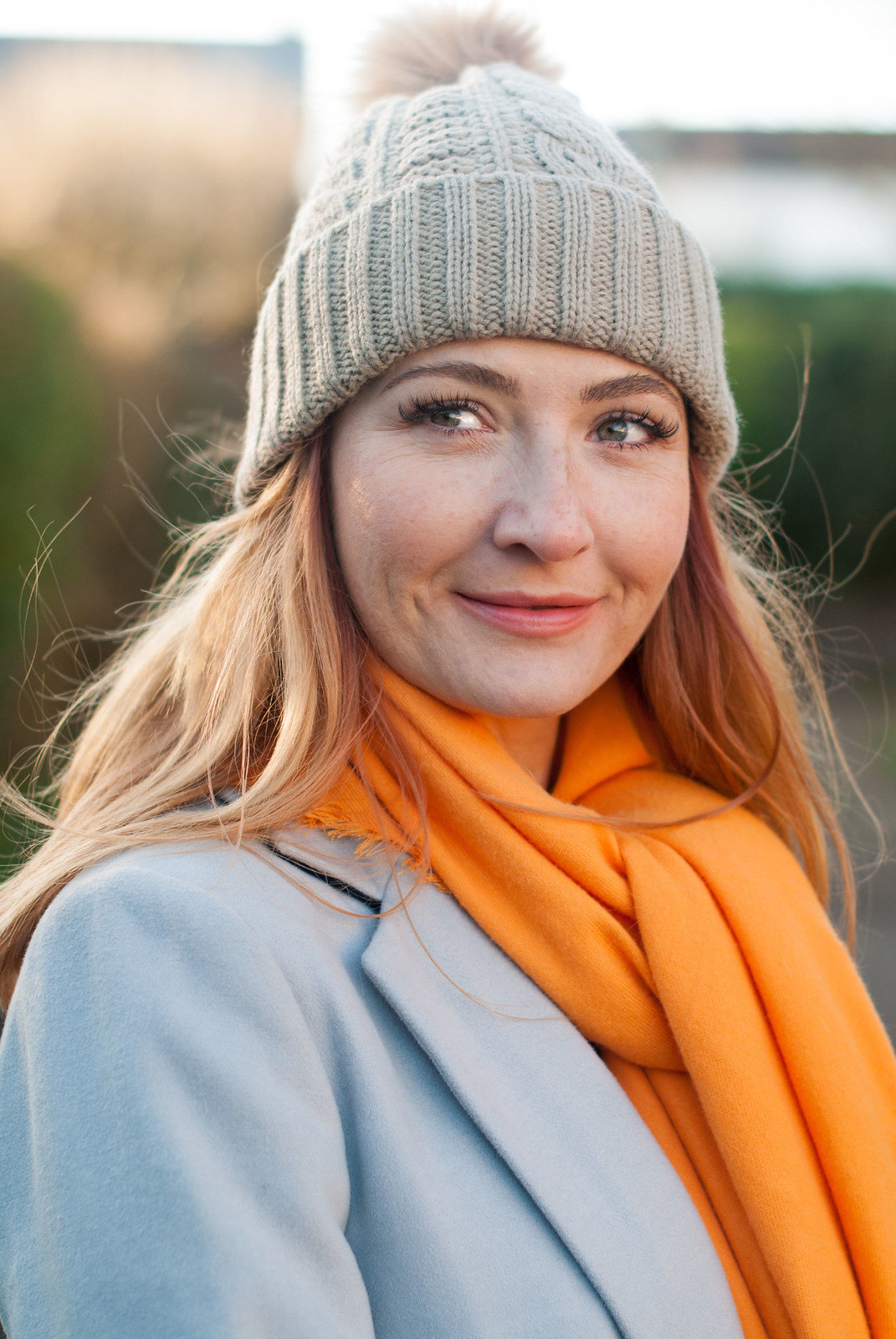 Thank you for joining the #iwillwearwhatilike link up! This started as a campaign on Instagram in August 2015 where women over 30 wore everything on a journalist’s list of “inappropriate” items for 30+ women (including leopard print, short dresses and oversized sunglasses. Yes, really). It was so popular that I decided to carry it on weekly where women of all ages link up their fabulous style, never mind what anyone tells them not to wear!

The link up goes live every Monday at 3pm UK time and will stay open for a week. Whilst the original article was of course aimed at the 30+, you can be ANY age to link up. The only criteria is that you’re wearing whatever you damn well like!

CLICK HERE to read the rules of linking up (and to grab the #iwillwearwhatilike button). Basically it’s just good manners to link back to here – to leave a comment is even nicer!

No featured favourites this week due to my trip to hospital I’m afraid… they’ll be back in two weeks!

DO SHARE THE LOVE AND VISIT AS MANY LINKS AS YOU CAN (YOU NEVER KNOW WHAT OTHER LOVELY LIKE-MINDED LADIES YOU MIGHT MEET) – THE ORIGINAL INSTAGRAM CAMPAIGN FORGED SOME WONDERFUL NEW FRIENDSHIPS SO DON’T MISS OUT!

Linking up to: iwillwearwhatilike, Shoe and Tell, Visible Monday, Fake It Until You Make It, Brilliant Blog Posts, Fun Fashion Friday, Passion for Fashion Friday, Saturday Share Link Up

Disclosure: This post contains affiliate links which means if you click through and buy I may receive a small commission at no cost to you.