So I’m having surgery.

That, in a nutshell, is the final medical solution TWO YEARS after I first had what I’ve always described as “my leg injury”. Or rather, chronic pain in my right leg with almost total numbness up the back of it that has blighted me and puzzled doctors for 769 days, and counting.

I’m having an operation on January 15th to sort this thing out (hopefully once and for all!) and I couldn’t be more relieved that we finally got to the root of the problem. For two years I’ve been in a perpetual state of Why does my leg STILL hurt…? Having a final medical diagnosis is such a relief, but this is just the beginning of what could be a slow recovery.

But first, to recap…

What happened to my leg

Long story (as) short (as possible): In November 2015 I went to Paris for a 24-hour blog trip. I travelled for two hours on the train to London, and two hours on the Eurostar to Paris, and that night in the hotel had excruciating leg pain. Next morning I felt incredibly nauseous which lasted, as well as the leg pain, all the way home and then for several days afterwards – I thought I’d torn a hamstring from sitting too long and perhaps in a bad position or hurt myself from carrying an overnight case up and down stairs and on the tube and trains.

I was actually diagnosed with a slipped disc and sciatica, which is a nerve running from your spinal chord all the way through your bum and down the back of your leg. I couldn’t walk unaided for about four weeks, and with acupuncture and physiotherapy it gradually – VERY gradually – got better.

However, I was left with residual pain in the back of my knee and numbness in the same area. I was told it would take a while but they would eventually go away.

Fast forward six months, and they hadn’t gone away. The first specialist I saw said I’d been misdiagnosed and that it wasn’t sciatica at all (although it doesn’t always produce back pain I hadn’t had ANY back pain whatsoever at any time).

I then started a year-long round of hospital appointments with everything from nerve ending tests to blood tests, from MRI scans to X-rays to being poked and prodded everywhere from my waist downward. The pain DID almost totally disappear, the numb area had reduced and I thought that I’d simply have to live with a weird numb patch and pain if I were prodded in a particular spot in the back of my knee. Doctors kept ruling everything out but weren’t finding the actual cause of the problem.

However, last summer (about six months ago), the pain came back literally OVERNIGHT – this time the whole of the back of my leg went numb, as did my pelvic region and the top of my thigh under my bum. I could walk okay, but I now had severe pain and constant stabbing pins and needles in my pelvis, leg and foot. Vigorous exercise was almost entirely out of the question (very frustrating for someone who loves running)!

Early autumn I was sent for another MRI scan, but this time instead of just my knee they scanned my pelvis and all the way down my leg.

What they discovered was a 7cm (3″) cyst in my pelvic region that was almost certainly pressing on the nerves running into my leg and causing the numbness and pain.

And basically, it had to come out.

Now strangely, it felt weird to be told This is what’s been causing you all the pain and discomfort for two years because it was both a relief (that we’d got to the root of the problem) and a worry. I guessed straight away I’d need surgery – or rather I hoped it was operable – but what I wasn’t expecting was getting it sorted so soon. I was told in September it was a cyst, I had a CT scan in October, I saw the specialist in November and because this department has no waiting list (this is all on the NHS, by the way) then I’d have the operation within a few weeks.

Today I had my pre-op assessment but this is where it gets complicated: I could be in for keyhole surgery, OR I might have to be opened up if it doesn’t come out easily (or if it’s attached to an ovary). They won’t know until they go in.

I’m either looking at being a day case with recovery of 10-14 days for keyhole surgery, or I’m facing major surgery, a few days in hospital and a recovery time of six weeks where I won’t so much as be able to lift the kettle.

What my surgery means for the blog

Therefore I can’t predict what’s going to happen – I won’t know until I wake up after surgery on Monday 15th. I’m going to write and schedule as much as I can preparing for a recovery time of 10-14 days, but if it’ll be longer I have no idea what will happen to my posting schedule. I’m going to sort out an assistant to help me with admin (emails, social media replies, etc.) but of course many decisions can only be made by me and me alone.

Now of course I KNOW that most of you will be totally understanding and of course will say that I shouldn’t worry about the blog and that my health is my number 1 priority – it absolutely is! But it’s also my livelihood and my only source of income. I simply have to put measures in place to ensure it ticks over and that it doesn’t seem like I’ve disappeared off the face of the earth.

The blog has been doing so incredibly well for me over the last 12 months and I don’t want all my hard work to be undone. I LOVE this job and I’ll do whatever I can to protect it! I’m hoping I’ll be able to fill my 2-3 days in hospital (if it’s major surgery) with writing on my laptop, because what else will there be to do…?!

I’m aiming to recover as quickly as possible, but at the same time I’m realistic about what might happen. I haven’t kept my fitness levels up to the gold standard I’d like them to be but I’m still reasonably healthy – I don’t drink or smoke, I’m not really overweight for my height (just a bit flabby and untoned), I don’t gorge myself on takeaways and I walk regularly.

The moral of the story is…

The moral of the story is, of COURSE, don’t just accept some sort of illness, niggling problem or pain that you have, even if you’ve been to the doctor about it. If my first MRI scan had included my pelvic region then I would have had this done about a year ago, but that can only be said with hindsight. Who would say straight away that a pain behind my knee was something that needed to be sorted by a gynaecologist?

Don’t accept pains and problems when you (and the doctors) don’t know what they are. Get them seen to. Get them sorted.

Keep badgering until you have answers.

Keep your fingers crossed for me

So on the 15th keep your fingers crossed for me that I wake up to find that it came out via keyhole surgery after all – I won’t lie and say I’ll be GUTTED if I discover I’m all hooked up to a catheter… but let’s cross that bridge when it comes to it! Having a hysterectomy is a whole other scenario, but that one I really won’t worry about yet (it wasn’t even mentioned in my appointment today).

Please excuse me if I don’t reply to comments either at all or not very quickly… I’m not sure what will happen which is somewhat frustrating, it’s so hard to make any plans. But I will absolutely be reading everything, you can be assured of that.

As far as the NHS are concerned, not only have they been swift and efficient, booking me in for an operation less than four months after the MRI scan that discovered the cyst, but every single member of staff I’ve come into contact with has been nothing short of super friendly, understanding and professional. How on earth they manage that while there are cuts galore and cancelled operations (the latest post-Christmas crisis to hit the NHS) is beyond me.

And it’s all completely free… I haven’t had to pay out a penny.* Praise be to the NHS.

IF YOU WANT TO SHARE ANY SIMILAR STORIES PLEASE DO SO IN THE COMMENTS BELOW (THOUGH PLEASE REFRAIN FROM SHARING ANY STORIES THAT END BADLY, THANK YOU…!) 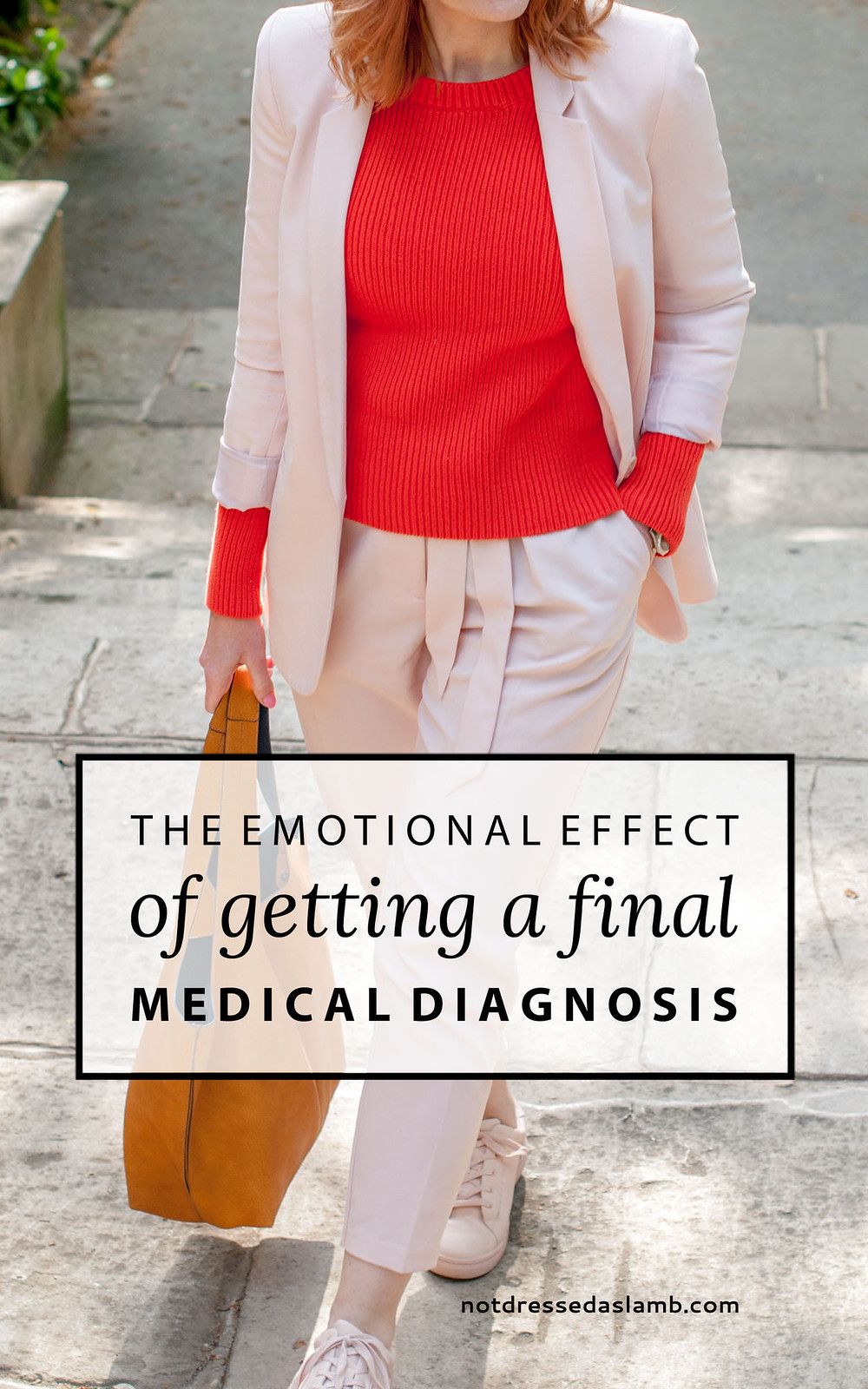