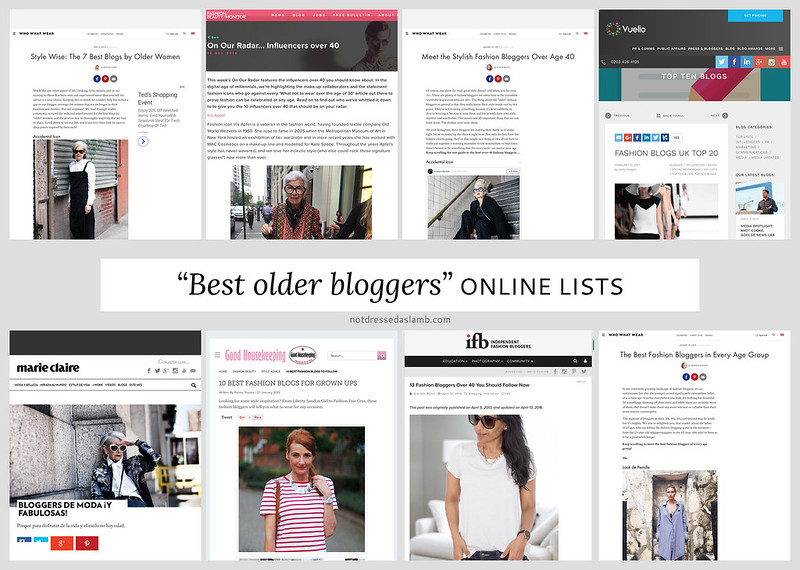 Earlier this year I was featured on Who What Wear as one of their “Stylish Fashion Bloggers Over Age 40” – I’m truly always so honoured to be featured and included among such stylish ladies.

However, the moment proved to be bittersweet (from my point of view at least) – whilst I was so flattered and pleased to be featured by Who What Wear (it doesn’t do my traffic any harm whatsoever), I realised that it was the third time they’d included me on a similar list-style post. To date, I’ve appeared in the following “best older bloggers” articles (at least these are the ones I’m aware of):

(Not including similar lists by other bloggers – I’ve only included large fashion sites and magazines, etc.)

Now pleeeease don’t think I’m tooting my own horn or being ungrateful (far from it – the exposure from these sites is amazing!) when I say this, but the crazy thing is that I’m nearly always featured on these “Best over 40 bloggers” lists… it makes me think, Why can’t they feature someone else for a change? Someone who should be celebrated at least once instead of me every time?

Here’s another interesting thing: There are about seven or eight bloggers, including myself, who are also regularly featured on these lists.

And therein lies the problem I have.

So yes I’m very happy (VERY happy) to be always featured on these lists along with Lyn, Alyson, Judith, Annette, Cathy, Melanie and Patti, but to be honest after the latest Who What Wear I felt somewhat disappointed that the same handful of bloggers were featured yet again – myself included. The list on Marie Claire Mexico’s site were five from the bloggers I just mentioned, no one new.

AFTER THE LATEST WHO WHAT WEAR ARTICLE I FELT SOMEWHAT DISAPPOINTED THAT THE SAME HANDFUL OF BLOGGERS WERE FEATURED YET AGAIN – MYSELF INCLUDED.

I’m not sure what the reason for it is exactly, but I think it’s a combination of factors: Most of the bloggers I listed have been blogging for many years (I’ve been going nearly six years). Or they’ve exploded onto the scene because they’re at the older end of the 40+ spectrum and very, very modern style-wise (like Lyn, for example). Or it could be lazy journalism – how do you find over 40 bloggers if you have to write an article about them? Why, Google “over 40 bloggers”, of course. And what you tend to get is the same list recycled over and over again.

And not that I wish less success or recognition onto any of the bloggers I’ve mentioned – FAR from it. They deserve every last bit of it, like the modelling contracts/jobs that Judith, Lyn and Melanie have landed, for example. It makes me incredibly happy and proud that older woman are making waves in the fashion industry, and I want to see more and more of it.

But what I also want to see is other bloggers getting recognition. There are so many that deserve it just as much as the list I mentioned. What worries me is that women who are searching for over 40 style bloggers to follow online will get these lists come up in their searches and think that there are only about seven or eight older fashion bloggers in the world because they’re the only ones being featured. In reality there are hundreds, possibly even thousands of them.

WHAT WORRIES ME IS THAT WOMEN WHO ARE SEARCHING FOR OVER 40 STYLE BLOGGERS WILL THINK THAT THERE ARE ONLY ABOUT SEVEN OR EIGHT OLDER FASHION BLOGGERS IN THE WORLD BECAUSE THEY’RE THE ONLY ONES BEING FEATURED.

For example, Samantha of Fake Fabulous has been blogging for less than two years but is already making waves with her colourful style and fabulous thoughts on fashion for older women. Carelia of My Small Wardrobe is a fierce but wonderfully positive fashionista. Lisa of The Sequinist couldn’t be more chic, sophisticated and sparkly if she tried. Diane of Fashion on the Fourth Floor is gorgeous and stylish, spreading an endless supply of joy everywhere you see her.

In case you’ve not seen it before, I have a blogroll that includes a separate list of 56 over 40 bloggers, and I want to highlight them here as they are ALL deserving of the sort of recognition that Who What Wear (and other sites, I’m not purposely singling WWW out) give me and the other seven or eight!

So please click through and check them out – I know 56 is a lot but they’re all worth it, I promise you. 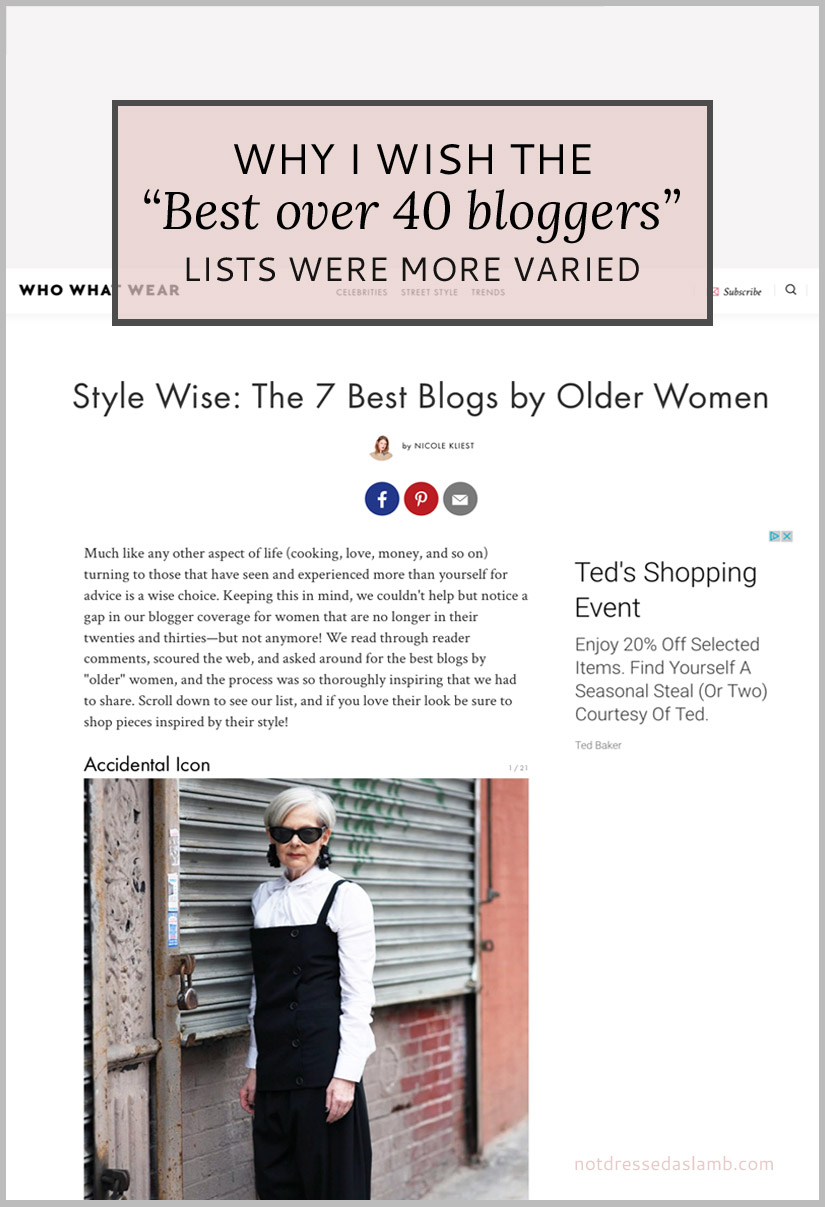 I guess I’m just a champion of those who deserve good things but have to fight harder to get it. I’m going to be tweeting a link to this post to all those publications and the journalists who wrote them in an attempt to get more variety of older bloggers recognised and hopefully featured in the near future.

This post has reminded me of the time I was at primary school when the teachers were choosing pupils to star in the lead roles of the school play. Every single year the same boy and the same girl – David and Emily, names have been changed – were chosen to take the lead parts, and being something of a crusader even then(!), I took it upon myself, aged about 10, to complain to the teachers that they always chose the same two. I wanted someone else to be chosen for a change.

The result was that when the lead parts were announced, the lead female part went to…

Oh sh*t, that wasn’t the outcome I wanted at all – I didn’t want the damn lead part! I wanted to paint the scenery or be the narrator (I liked art and reading out loud). So back I went to the teachers, saying that I wasn’t complaining because I wanted the part, I wanted someone else to be given a chance. I think they did choose someone else for the female lead in the end, who was really good and deserved the part, but not Emily.

Since then I’ve been very careful about the causes that I champion…!

What are YOUR thoughts?

I’d love to know your thoughts on this, and whether you’ve thought the same about these articles and the bloggers they choose. It’s a tricky subject to bring up – if you’re like me and are regularly featured, it could seem that you’re being ungrateful. However if you’re someone that isn’t featured and you bring it up, some may interpret it as jealousy or resentment of others.

You can’t win in other words – but this is the place to be honest and share your feelings about it in the comments. No judgement!

Link up: All that’s left to say is – I’ve shared my thoughts/stories/tuppence-worth this week, now it’s time to share yours… LET’S GET THIS [LINK UP] PARTY STARTED!

WHAT’S BEEN THE HIGHLIGHT OF YOUR WEEK THAT YOU WANT TO SHARE? TELL ME IN THE COMMENTS OR TWEET ME @NOTLAMB!

– Does It Matter Whether We Can “Pull Something Off” Or Not?