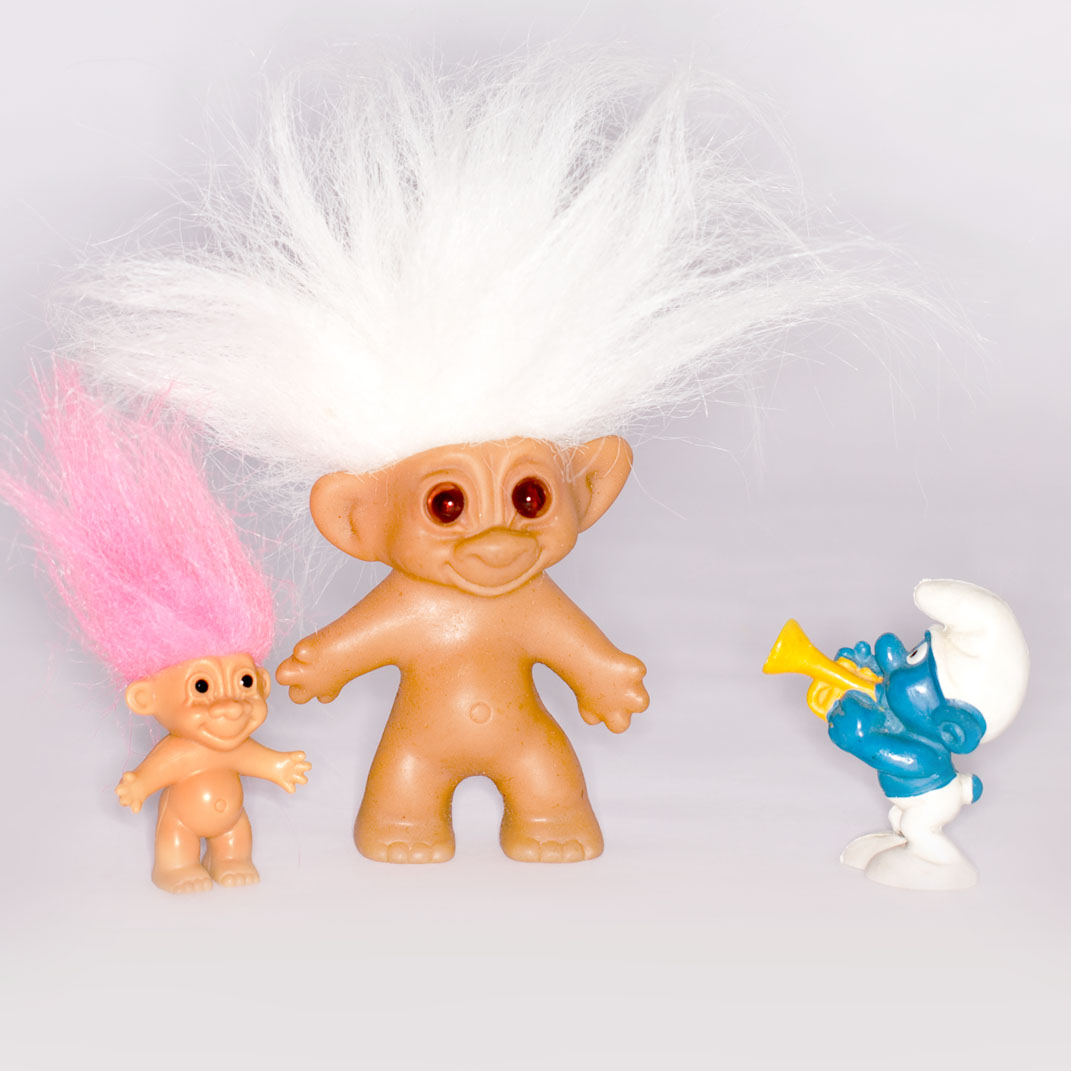 It’s a common problem as a blogger: How should you respond to negative comments or (worse) trolls?

There’s lots of great advice out there and a post written about the subject is nothing new, but I thought I’d share how I personally deal with negativity on my blog or social media channels (and why). To be honest I’ve been very, very lucky during my 3-4 years’ blogging compared to some. I’ve never received anything especially hurtful or vicious, just snide comments (usually discussed away from my blog in a forum somewhere. They obviously don’t realise bloggers can see where traffic comes from and can read what they’ve written).

So I’ve finally come up with a tactic that works for me. The solution? It’s an old-fashioned one: Kill ’em with kindness.

I’m convinced this works a treat in all sorts of situations in life, and it’s a lesson I was taught at a very young age by my mother. If we got into a standard mother-and-daughter row over not very much at all, she would very quickly diffuse the situation by simply saying very nicely (and with the merest hint of sarcasm), You know what, dear, you’re absolutely right. No, really, you ARE right. I am wrong.  And so on, and so on.

Now this would absolutely INFURIATE me because she had effectively cut the argument dead right there. And every time I’d try to argue more, she’d just keep saying I was right and smile. (Compare this to rows with my dad: Both wanting to be right and shout loudest, our rows would simply escalate and escalate.) So I couldn’t argue that my mother was still wrong because she kept agreeing with me and being nice.* 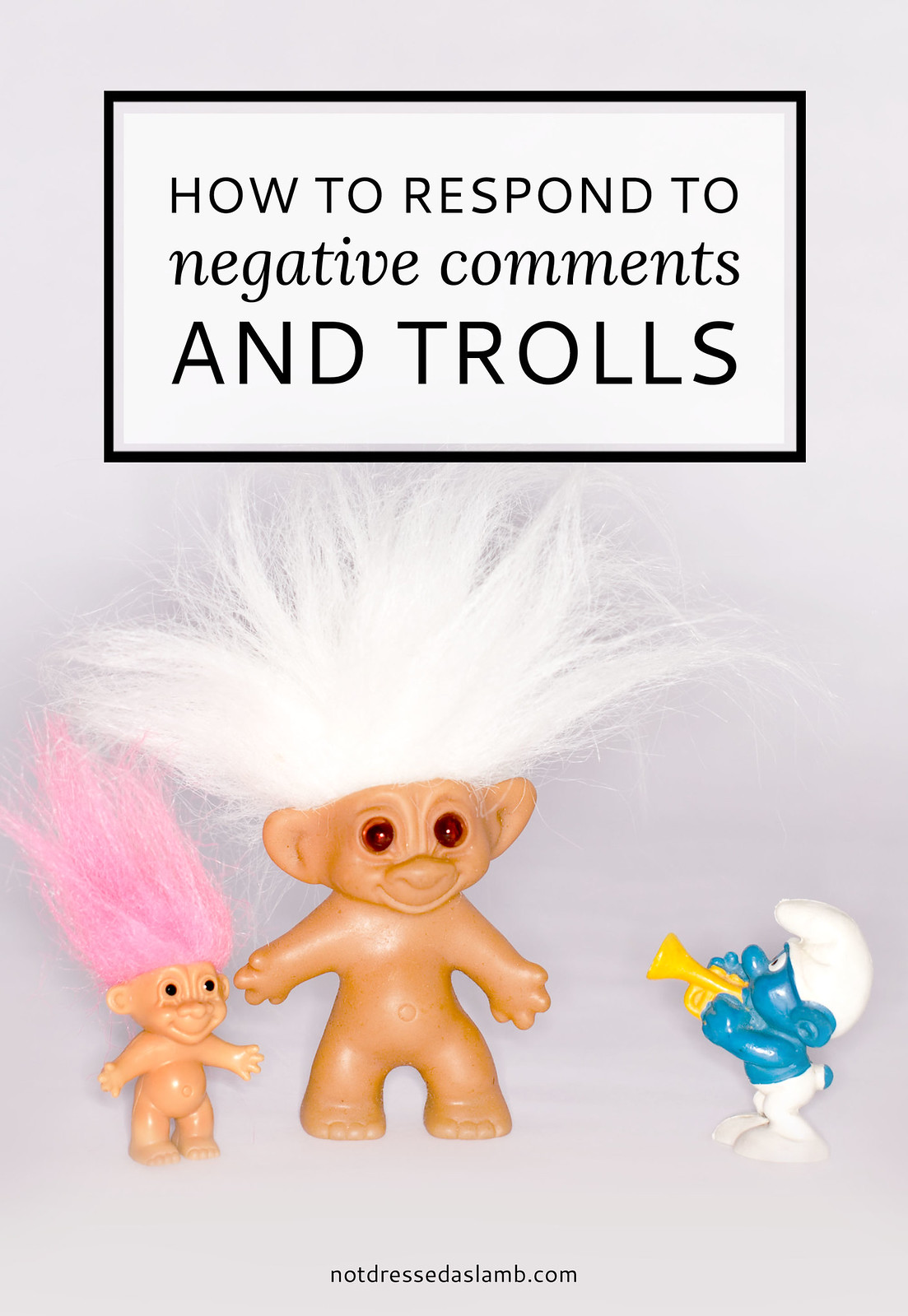 She knew very well that if she mirrored my (pretty awful) teenage behaviour, it would just fuel me to the point that the argument had nowhere to go except name-calling. So by being nice and appearing to just give up and ‘lose’ the argument, she’d do exactly the opposite and take the power back. And THIS is what I aim to do when dealing with negativity: Take the power back.

WHEN DEALING WITH NEGATIVITY, TAKE THE POWER BACK.

The first time I really grasped this concept was in a Google Plus post last year. Nothing out of the extraordinary: just an outfit post of me wearing a grey marl sweatshirt and yellow trousers, linking back to my blog. For some reason, that outfit (no more garish than some of the other creations I’ve come up with) attracted a string of comments such as “make it stop” and “is this the new visually impaired collection by Stevie Wonder”. Hilarious.

I decided to over-enthusiastically thank each one for their comment and spreading so much love around the internet (because, you know, there isn’t enough of it out there and I was feeling particularly mischievous that day). And I said how amazing it was to collaborate with Stevie Wonder. And have a nice day (a phrase that’s really not used by us Brits).

The reaction? It worked a treat. Only one of them came back with a sexist remark about “time of the month?” (original), but generally it just stopped everyone from coming back at me with anything else – because what do they say when they’ve been thanked and wished a nice day? To be honest I did go a bit over-the-top with my tales of where I’d worn the outfit (you’ll see what I mean if you read the thread) but by that point, my husband and I were laughing so hard at the stupid comments they’d left that I just couldn’t help myself.

Therefore, I came to the solid conclusion that if they receive a torrent of sickly sweet, gushingly nice nothing’s-gonna-stop-me-being-nice to you replies, they’ll see you’re not worth bothering with because nothing phases you. They WANT an argument (like my teenage self did), and if you don’t cooperate they’ll (unfortunately) move onto to someone who will give it to them.

IF THEY RECEIVE A TORRENT OF SICKLY SWEET, GUSHINGLY NICE NOTHING’S-GONNA-STOP-ME-BEING-NICE TO YOU REPLIES, THEY’LL SEE YOU’RE NOT WORTH BOTHERING WITH BECAUSE NOTHING PHASES YOU.

Don’t be that person. Handle the comments in any way you choose (this is purely my method) – but don’t add fuel to the fire because they will always win.

And if you DO happen to go with my method, I’d recommend an extra little something: 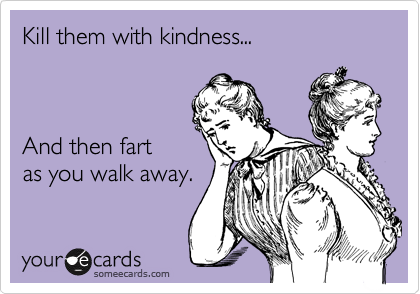 HAVE YOU EVER RECEIVED NEGATIVE OR UNPLEASANT COMMENTS FROM TROLLS? HOW DID YOU HANDLE THEM? PLEASE – DO SHARE YOUR BEST TIPS FOR DEALING WITH THE LITTLE CRITTERS!

*I must make it clear that I had (and still have) a wonderful relationship with both my mum and my dad – I’m talking the usual hormone-driven rows most teenagers have with their parents. My mother also has a death-stare to rival the most evil death-stare you’ve ever seen – the definition of a ‘strong woman’, she’s no pushover…!

P.S. If you like this, why not check out the rest of my Blogging Tips posts?