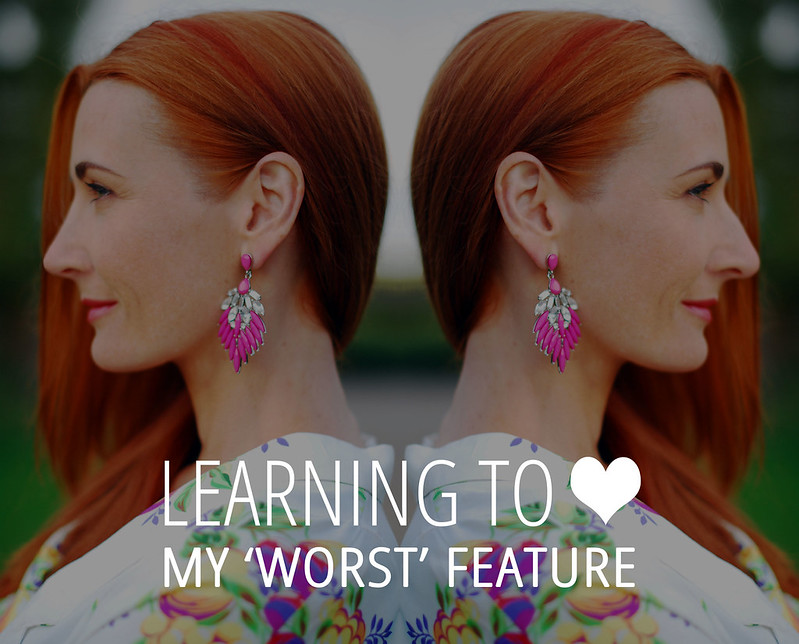 If you follow my Facebook page you may have seen a post where I mused upon those who embraced their “worst” feature. Or rather, the feature that is deemed unattractive or even unacceptable (by others) in today’s society. The response was overwhelming, and so many inspiring opinions and thoughts really got me thinking more about it.

For me, my “worst” feature has always been my nose. Now I’m not looking for compliments or cries of “but you haven’t got an awful nose” at all – that’s not the point of this post. Coming to the conclusion that you can learn to love the very thing you’ve hated about yourself for so long is what I’ve been mulling over.

I think I’m right in saying that a lot of women have a part of themselves that they’d change if they could. I’m talking about the body parts that only surgery can alter, or are even impossible to do anything about (your height, for example). And for me – especially growing up – it was my nose.

I used to get the odd “Barry Manilow” dig from other kids; luckily it didn’t surmount to bullying or even have an impact on my self-confidence. I knew perfectly well I didn’t have a teeny tiny button nose, and, well, I couldn’t do much about it – so I simply accepted it. But I could get, if I’d wanted, a nose job. I thought about it many times over the years, but the expense was usually the thing that stopped me seriously considering it. 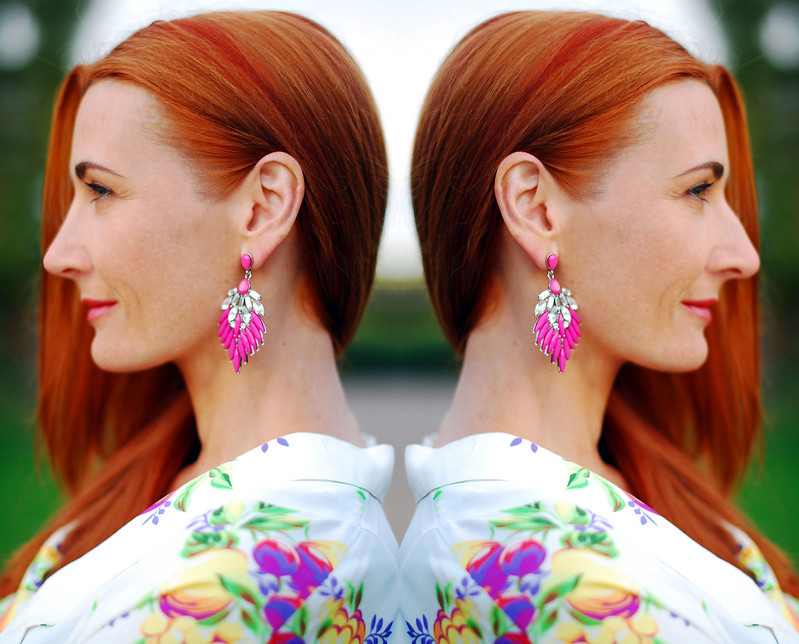 When I hit my 30s and actually found myself with a little disposable income – enough to actually go through with it, I found myself thinking that it wasn’t such a good idea after all. I’d always dreamed of having the same sort of nose, but just a bit smaller. So that I still looked like me. In other words, something like the one on the left (above). On the right, my nose; on the left, my “ideal”, Photoshopped nose.

The thing is, did you notice that there was a difference? I showed the mirror image to my husband and asked if he noticed anything at all, and he didn’t catch on at first. Which proved to me two things: 1. In my head I think there’s a huge difference between how I think my nose looks (i.e. huge and with a big bump in it) and what I’d like it to look like (smaller and straighter). 2. That if my own husband can’t immediately see a massive difference when I’ve “had a nose job” – is it really worth the time, money and pain?

There are many examples of celebrities who have bowed to the pressure and had work done. You may have read in the last day or two how Renée Zellweger was virtually unrecognisable at an event this week – I personally don’t think she looks terrible like many of the comments I’ve read, but I think it’s obvious that she’s had her eyes opened up. Gone are the cute squinting eyes she was so well known for; now those same eyes aren’t Renée’s (or Bridget’s) any more. The same happened to Jennifer Grey after having a nose job: she said in an interview that having plastic surgery was the worst mistake she ever made. She was no longer recognisable as Baby from Dirty Dancing, just somebody who looked a bit like her. 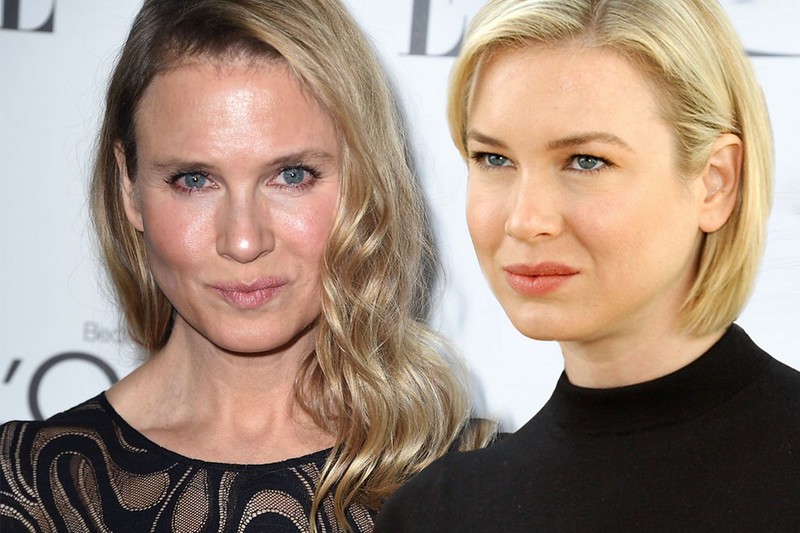 So my fear is of “not looking like me” anymore. Sure, I may end up with a cuter nose, it’ll be straighter and my profile won’t be quite as “strong” – but at the ripe old age of 42 I’ve decided that my strong profile is what makes me look like me. I definitely don’t want to end up looking like a homogenised version of myself.

There are, however, some female celebrities who haven’t had work done, despite being told to do so. Cindy Crawford didn’t get her mole removed, and Georgia May Jagger kept the gap in her teeth. Both reasonably easy procedures (no major surgery), but for both of them it’s their trademark and what’s contributed to their individuality and their success.

The women I’ve grown to admire over the years with the same strong noses as me are Barbra Streisand and Anjelica Huston (below). Would Streisand have been as successful if she’d had her nose done? Probably not. Anjelica Huston was told to get a nose job by Eileen Ford when she started modelling but she refused. Thank goodness she did: I can’t imagine Morticia Addams having a cute button nose, yet she couldn’t have looked any more beautiful in that film if she tried. 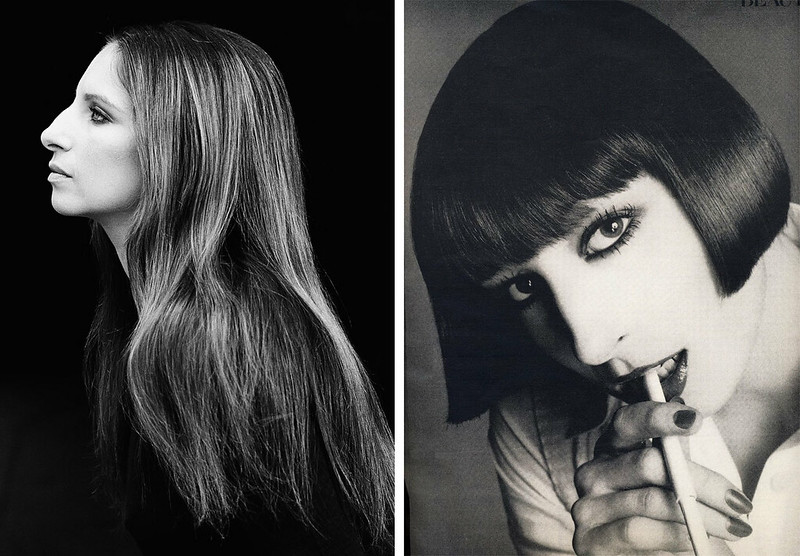 While I’m focusing on noses, it’s interesting to note that these women often had photos taken that emphasised the very feature they were told to get fixed. I’ve noticed I’ve done it myself in some of my recent shoots; sometimes a strong composition is needed, and a profile shot that includes a strong nose certainly helps.

So I’m sticking with this nose. If I’m not bothered when someone doesn’t like the way I dress, why should I care if they don’t like parts of my face?

If you have a feature that you (or others!) feel strongly about then do let me know about it in the comments… I’d love to know your views.

P.S. If you want to see some of the outfit posts where I’ve featured a strong profile picture, see here, here and here.