“Well, I’m just being honest.” Five words that make red mist rise up in me.

Something I’ve wanted to get off my chest for years here on the blog are my thoughts on brutal honesty. Especially the type of honesty that’s paraded like a badge of honour, when the person proudly announces how they’ll always be upfront and honest, and will always tell you exactly what they think. The type that WOULD tell you your bum looks big in that.

Because if someone doesn’t have the decency to have any sort of sensitivity towards other people and their feelings, then that’s someone I can do without in my life, thank you very much.

I won’t be getting into the perils of social media here, as we all know how there are a hateful few that spoil it for the rest of us. Those that hide behind keyboards and write vile and disgusting comments are a breed of their own; they’re unfortunately the inevitable, super crappy sideshow that happened as a result of the incredible invention that was social media (and the internet in general).

No, I’m talking about those people In Real Life who are proud to be the honest types. The ones that “never lie“. The ones whose flippant, honest remarks to someone they know (and often love, whether that be friend, family member or partner) stick like glue for the rest of that person’s life.

And, in many sad cases, affect people’s entire lives and the way they view themselves. All because of one tactless comment.

I know, because I’ve had a few choice things said to me in the past – and I’ve NEVER forgotten them. They were thoughtless at best, damaging at worst. Luckily I’m not the sort of person who has ever allowed others’ opinions of her to affect her too greatly (as anyone who reads the blog will know I Do. Not. Care. if others don’t like what I’m wearing #iwillwearwhatilike), but it hasn’t meant I’ve forgotten what they said.

I doubt there’s a single person reading this who hasn’t had someone at some point say something unkind to them under the guise of “just being honest”. And was the comment absolutely necessary? Was it some sort of ultimately beneficial critique? I doubt it.

As a few examples, these are all things I’ve either had said to me, or I’ve been present when they’ve been said to someone else, often in front of others (I promise they’re all true):

Don’t stand like that, your belly makes you look pregnant.

Why are you still working at that job? Don’t you want to do something with your life?

You know that fringe doesn’t suit you, don’t you? I much preferred your hair before.

I didn’t recognise you, you’ve put on so much weight!

Those shoes are awful, you couldn’t pay me to wear them.

Why don’t you have children? Are you firing blanks or something?

Wow, that’s a huge spot you’ve got right in the middle of your face.

I don’t remember you being this skinny before?

Do any of these sorts of comments ring true with you? I’m so sorry if they do, because nobody deserves comments like that. None of these opinions were asked for at the time – they were all just given out for free.

Brutal honesty is not kind.

Brutal honesty is just an excuse for having a total lack of sensitivity, for being too selfish to see that you’re hurting someone else just because you are INCAPABLE of keeping every single one of your opinions to yourself.

The key thing is this: people’s choices – their appearance, clothing, lifestyle, careers, etc. – are none of other people’s business. I don’t care whether it’s your mother, father, best friend, sister, aunt, work colleague or partner. NO ONE has the right to express unsolicited opinions with the excuse that they’re “just being honest!“, as if the insistence of blurting out every thought that comes into their head makes it okay.

Making someone feel like utter crap is not okay. Throwaway, “honest” comments like these can stick in people’s heads for years and years. Take the comments above as examples; some of them weren’t even said to me, but I still remember them clearly (up to 25 years later). Just imagine being the person on the receiving end.

I’ve been in situations when I’ve seen someone I know and they’re wearing something or had a haircut (or even something more permanent) that I don’t think looks good on them or that I didn’t personally like. I didn’t have any right to tell them that, however, and I wouldn’t have dreamt of saying anything to them at all anyway. Loved ones of mine have made decisions or done things that wouldn’t have been my choice, but why do they HAVE to know that?

They don’t. My opinions are not theirs to know, nor mine to tell.

The worst times I see this are in those Say Yes to the Dress type of shows on TV, where the bride-to-be takes an “entourage” [eye roll] to her appointment because she wants honest opinions. (And boy, do they get them!) If I were getting married and having to choose a wedding dress now, I wouldn’t give a flying f*** what anyone else thought about my dress, except maybe my husband. And even then what I want to wear (because I feel a million dollars in it) would still override anything I think he would want me to wear.

Because if you’re going to marry someone, you’d better be marrying someone who allows you to make your own choices about what you want to wear. Because if you’ll be constantly criticised for something as basic as what you put on in the morning, where on earth will the criticism stop?

How I deal with being asked for my opinion

You might be wondering how I approach the tricky situation of actually being asked my opinion about someone’s hair/life choices/outfit, etc. when it’s not my cup of tea. It depends on the situation, and how I’m being asked.

If you’re being shown something enthusiastically by someone because they love it and they then ask what you think, that’s the time to be pragmatic – by that I mean “pragmatically considerate”. I will always, always put that other person’s feelings before my own. If they love it, who really cares what I think? All they’re looking for is validation. I’ll simply answer tactfully – in a way that leaves them still happy – and NEVER let on that I don’t like it. If it means a little white lie, then I’m okay with that. My little white lies are nowhere near as harmful as brutal honesty can be.

I love seeing enthusiasm in people, and if someone is made happy by something that’s not for me, then so what? I’m just crazy happy for them.

Never will I be the rain on someone else’s parade.

What are your thoughts on those people who offer up brutal honesty IRL every time (solicited or otherwise)? Tell me in the comments… 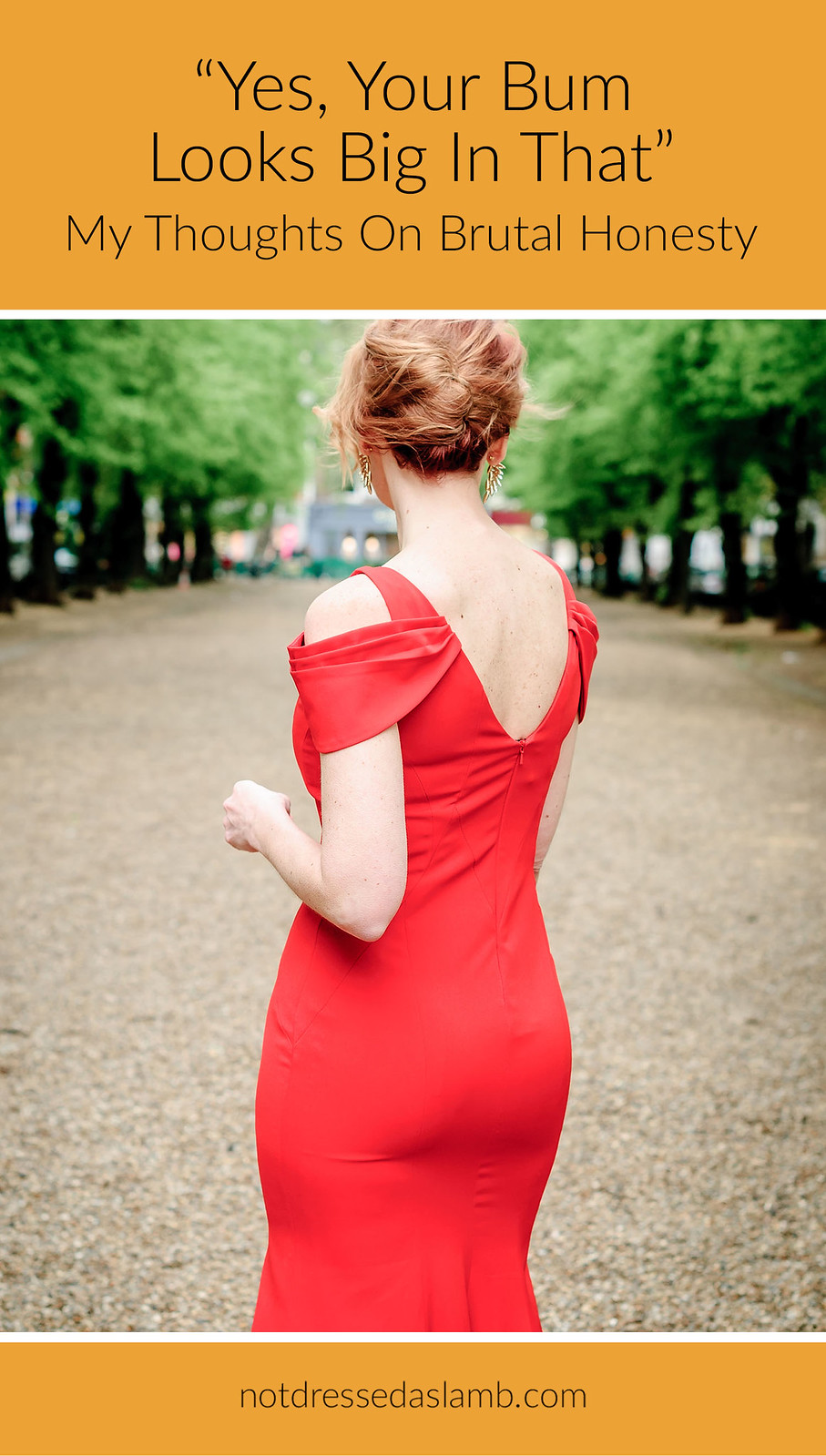 P.S. If you wanted to see the original post from which this image was taken, click here!