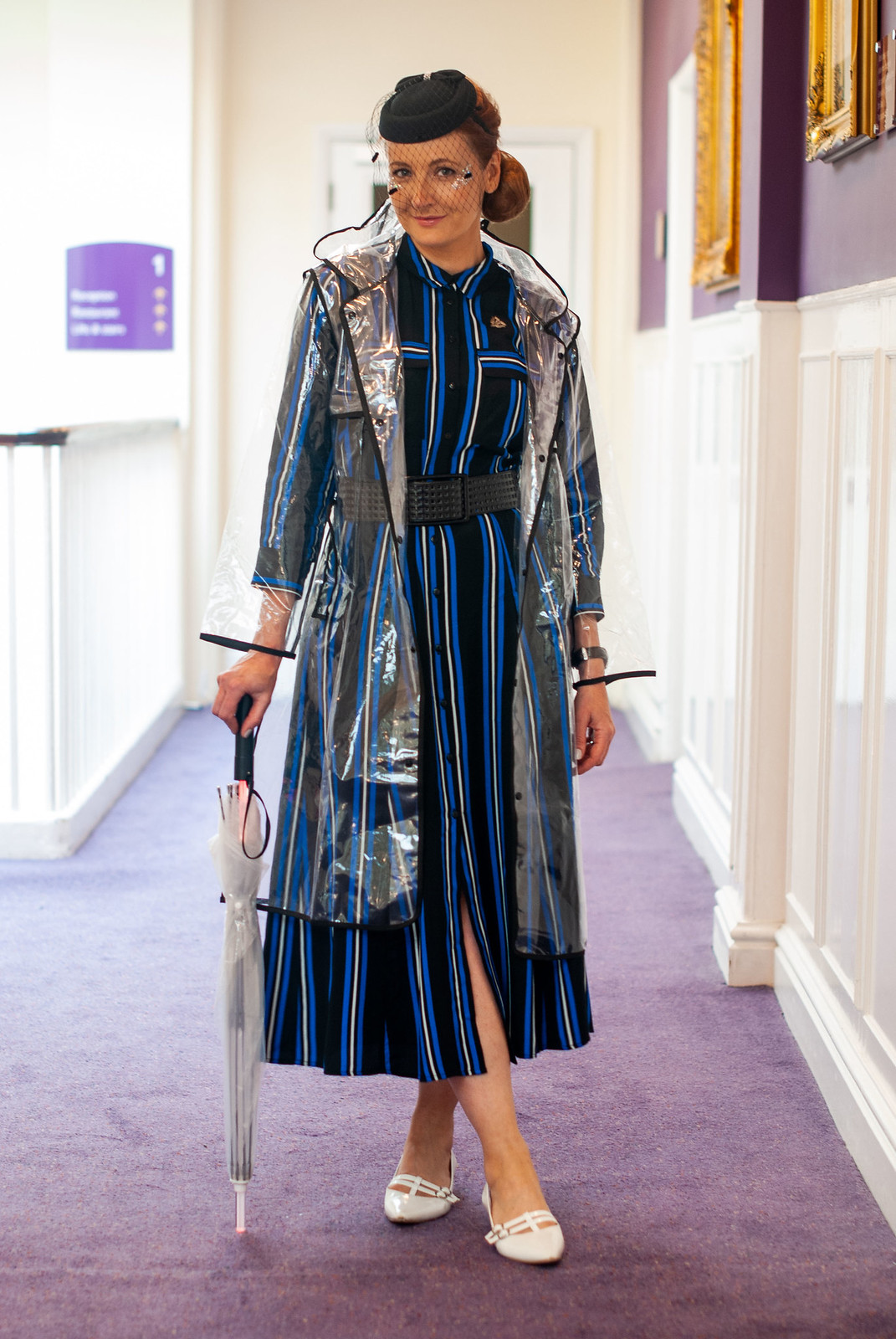 What on earth is the Blade Runner Secret Cinema I hear you ask – I wondered exactly the same thing myself a while ago!

The Secret Cinema is an event that’s been going for a few years “recreating” classic movies in a secret location where everyone gets dressed up in the style/spirit of the original film. In Blade Runner the place was made to look like the dystopian LA of 2019 set 37 years into the future (and I know, that’s now next year, eek) along with street scenes, fake rain and food stalls selling noodles and dumplings. There were actors playing the key parts as well as a lot of extras who mill around, playing up to their characters and interacting with you… it was all rather bizarre and hilarious at times, but my god was it an experience!

(BTW the link up is a day late as yesterday was Bank Holiday Monday – from now on any link up falling on a bank holiday will be a day late to give me the day off!)

When you buy tickets you’re assigned a character role and an identity (I was Gloria Johnson, Keith was Harry Pierce #LOL), and you’re expected to dress up as per your occupation. They give you ideas on what sort of look to go for and suggestions for what to wear, and I was overjoyed to find out I was a Tannhauser Industrialist (do NOT ask me what on earth that actually was) – the key look for women assigned to that role was very 1940s-inspired, with pillbox hats and lots of face glitter.

Grimy, rainy, futuristic LA meets 1940s tailoring, if you know what I mean?!

Past Secret Cinema events have included Moulin Rouge, 28 Days Later, Ghostbusters and – of course – Star Wars… any films that feature memorable costumes and sets are perfect for these events (I’m DESPERATE for a Fifth Element one). Keith (or, should I say, Harry) was a Private Investigator, so he needed the big raincoat and waistcoat with a tie: 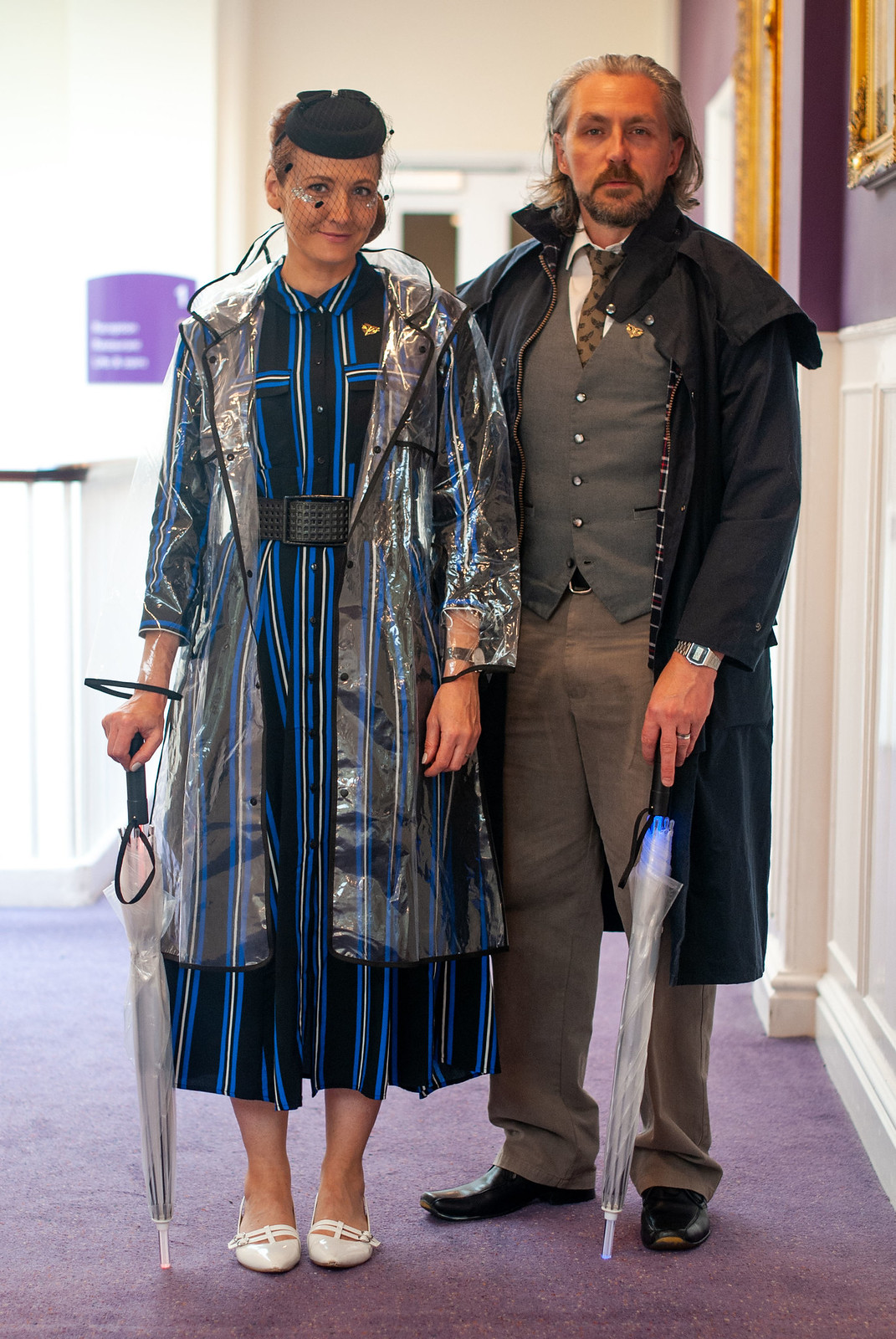 He makes quite a cool (but a little bit rough n ready) PI, don’t you think…? 😉

It started with the dress – I’d had my eye on a few shirt dresses this spring, especially after researching so many current season dresses for my wedding guest outfits post from the other week. I went for the striped maxi shirt dress from Mango in the end: the colours were dark (far more appropriate than any pale colour) and you could do the button up to the neck to make it look more 1940s. It needed a wide belt to cinch in the waist and then I added the obligatory clear raincoat.

(I say obligatory – it was more than that…. it was absolutely ESSENTIAL if you didn’t want to get completely and utterly drenched. As it was, the bottom of my dress and my feet were soaked through, and it’s just when you’re at your wettest that you’re taken into the “cinema” part and everyone gets to watch the movie itself. So we all sat there happy as anything, but totally soaked.)

RELATED  Styling a Strappy, Tiered Summer Dress With All The Accessories

And the details are what made the outfit REALLY cool (I know I’m tooting my own horn here but I’m telling you – I LOVED this outfit)!

Flats were part of the dress code (you wouldn’t be allowed in wearing heels) so I chose some white pointed flats I’ve had for a few years that I didn’t mind getting wet/trashed… good job too, considering the amount of rain there was. Pillbox hats with veils featured a lot in the movie, so I got myself a cheap black pillbox hat with a birdcage veil from Amazon. Finally, glitter around my eyes which was also worn a lot in the movie (well, it was made in 1982)! I regret to say I couldn’t get hold of biodegradable glitter in time, but I made sure I didn’t wash it down the sink after talking about how bad glitter is for the oceans last year on the blog. I rescued as much as I still had on my face and put it back in the pot for another time #DoingMyBit

Finally, the umbrella. EVERYONE there needed an umbrella, and most of the ones there were illuminating umbrellas (like ours) and clear. It was quite a sight to see everyone on the dance floor at the end, dancing in the “rain” under their glowing umbrellas and getting soaked.

I’ve always been a huge fan of fancy dress (in the last few years I’ve been Disney’s Cinderella in rags, a Japanese anime girl and Johnny Depp’s Willy Wonka) and Keith’s a fan too, so we have no qualms about looking like a couple of loons (though this was probably my most stylish fancy dress outfit to date).

It was one of those events where those that didn’t make much of an effort really, really looked daft – if you didn’t look 100% grimy, futuristic LA then you stood out like a sore thumb. However, travelling on the tube was fun… I could sense I was being stared at but hey, once we got nearer the event we were joined by a lot of others and we didn’t feel QUITE so conspicuous!

We took a few quick shots in the hotel before we left and a few were taken after the event. Phones we not allowed inside (it’s called Secret Cinema for a reason) so it was somewhat frustrating because I wanted to put everything onto my Stories. But no one else could either, so you get to be far more immersed in the whole experience so I think it’s a good thing.

The company that puts on these events are doing a Romeo and Juliet Secret Cinema in August, and I’m seriously considering getting tickets for that too. It was SO much fun, get yourself along if you can get to London in August!

Do add your outfits to this week’s link up – and if you’ve added a link to here or my button to your post you may be featured next week!

WHAT LOOK FROM BLADE RUNNER WOULD YOU WANT TO DRESS UP IN? OR WHAT OTHER MOVIE WOULD YOU CHOOSE AS A SECRET CINEMA EVENT? COMMENT BELOW…! 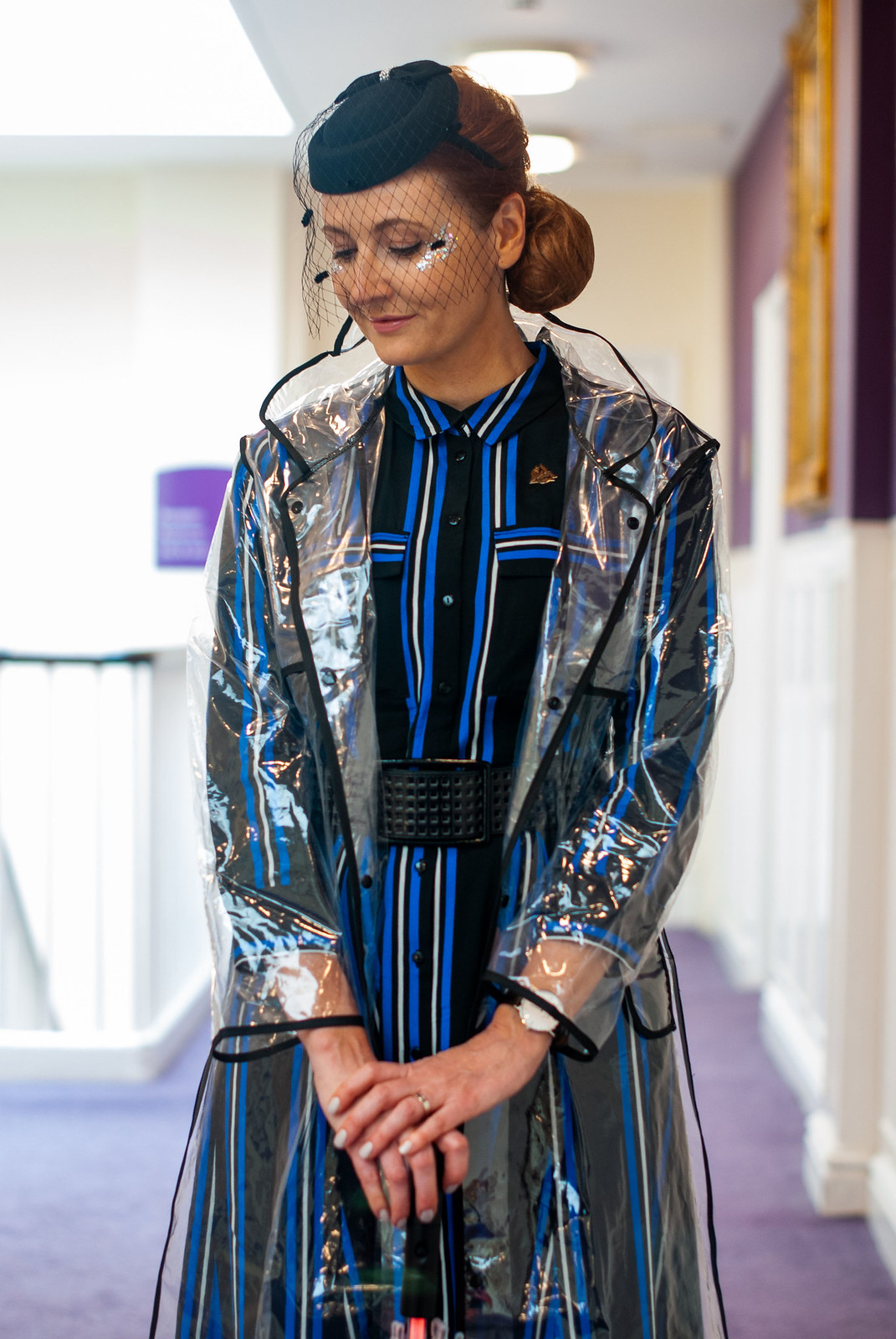 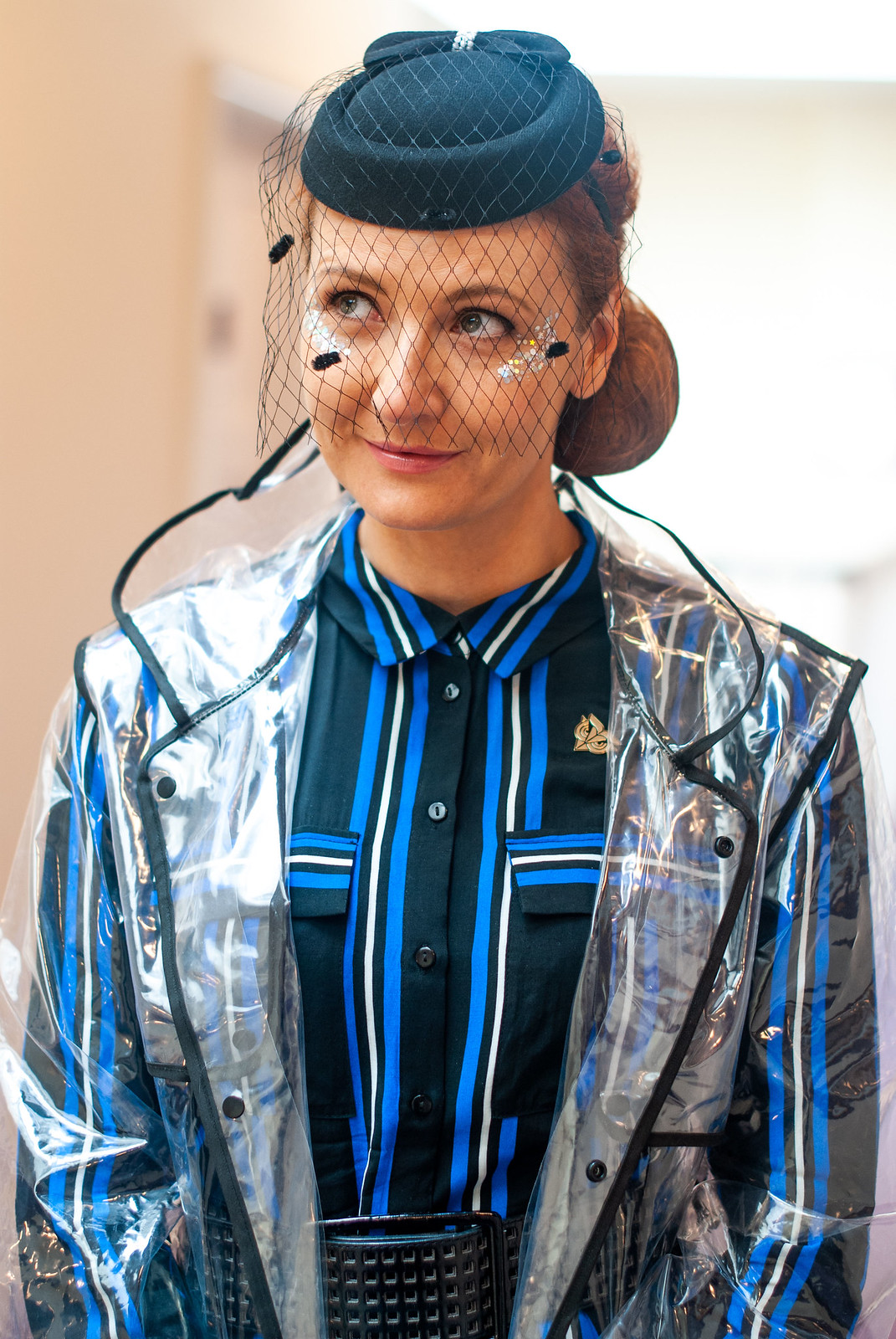 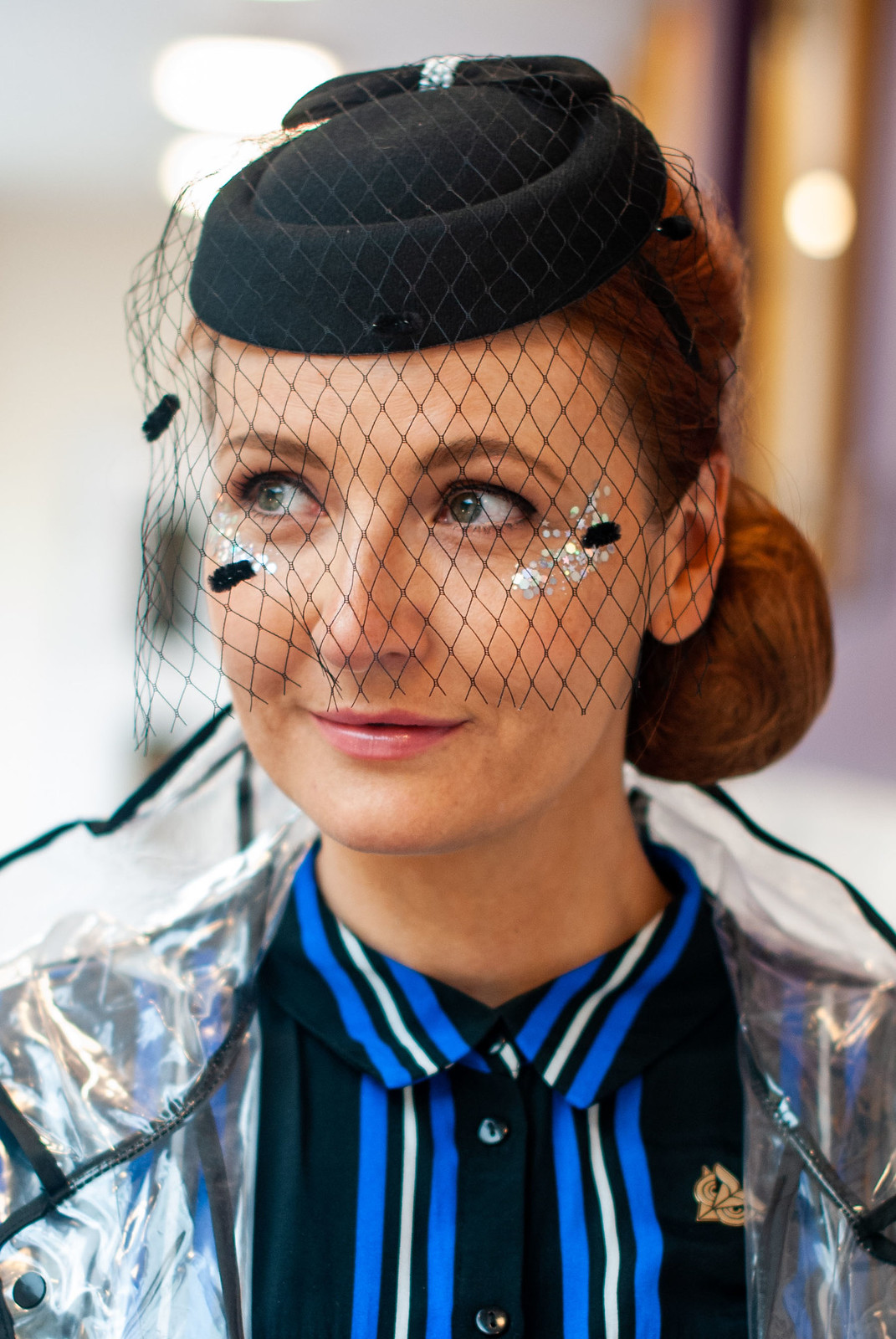 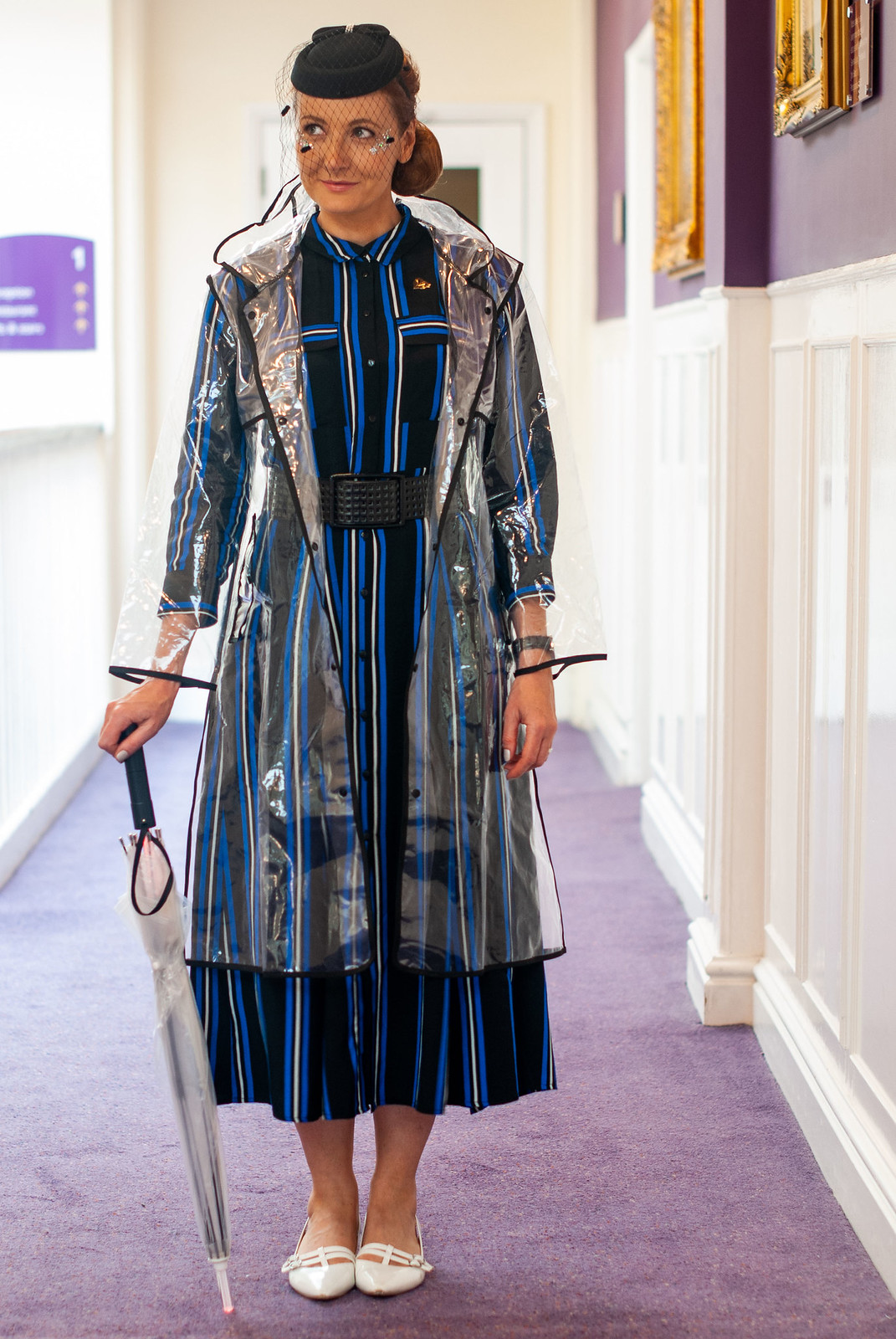 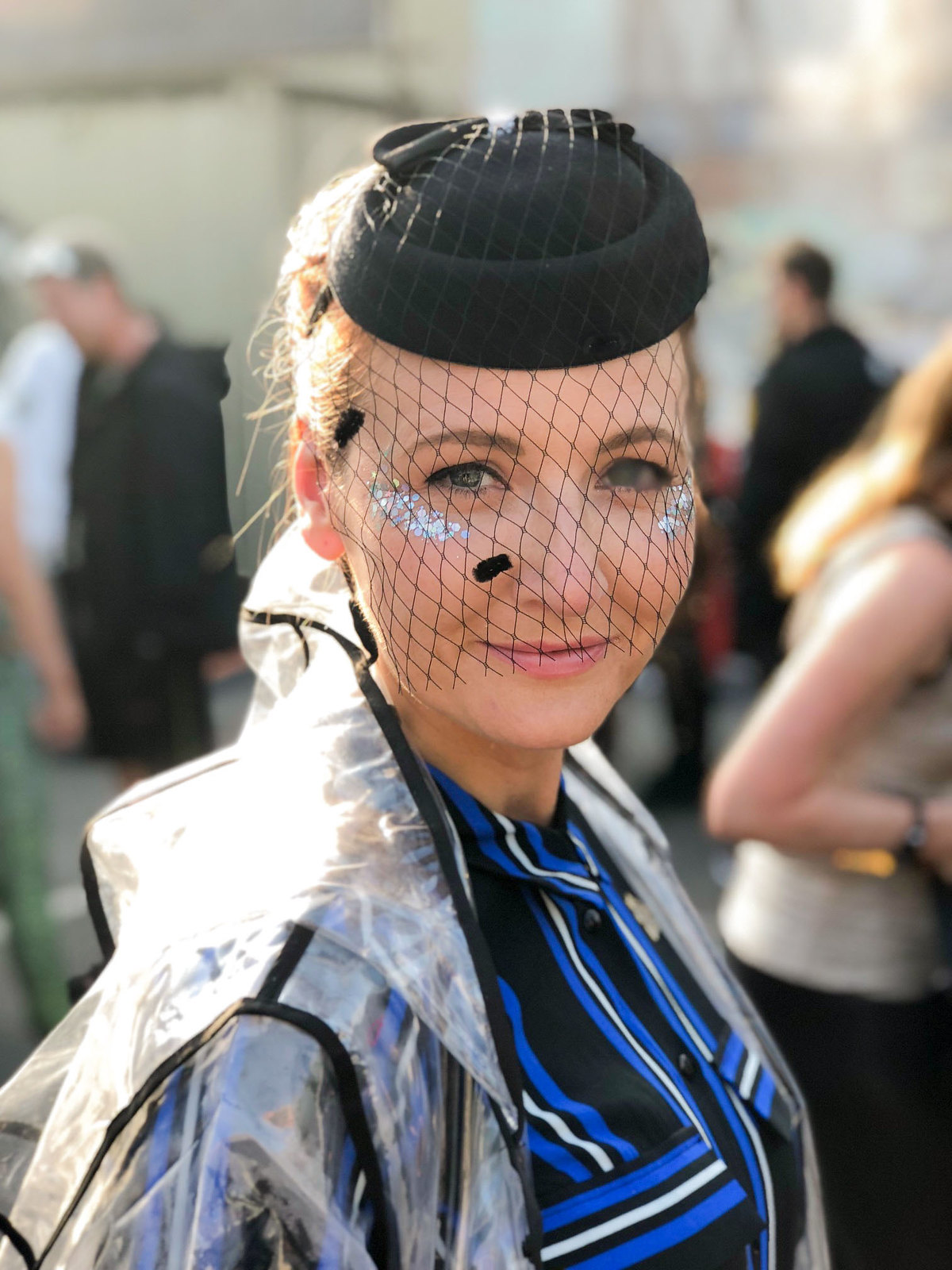 Above: this was taken with my iPhone, and it’s done some weird glazed thing to my left eye. Maybe I’m secretly a replicant after all…?!! 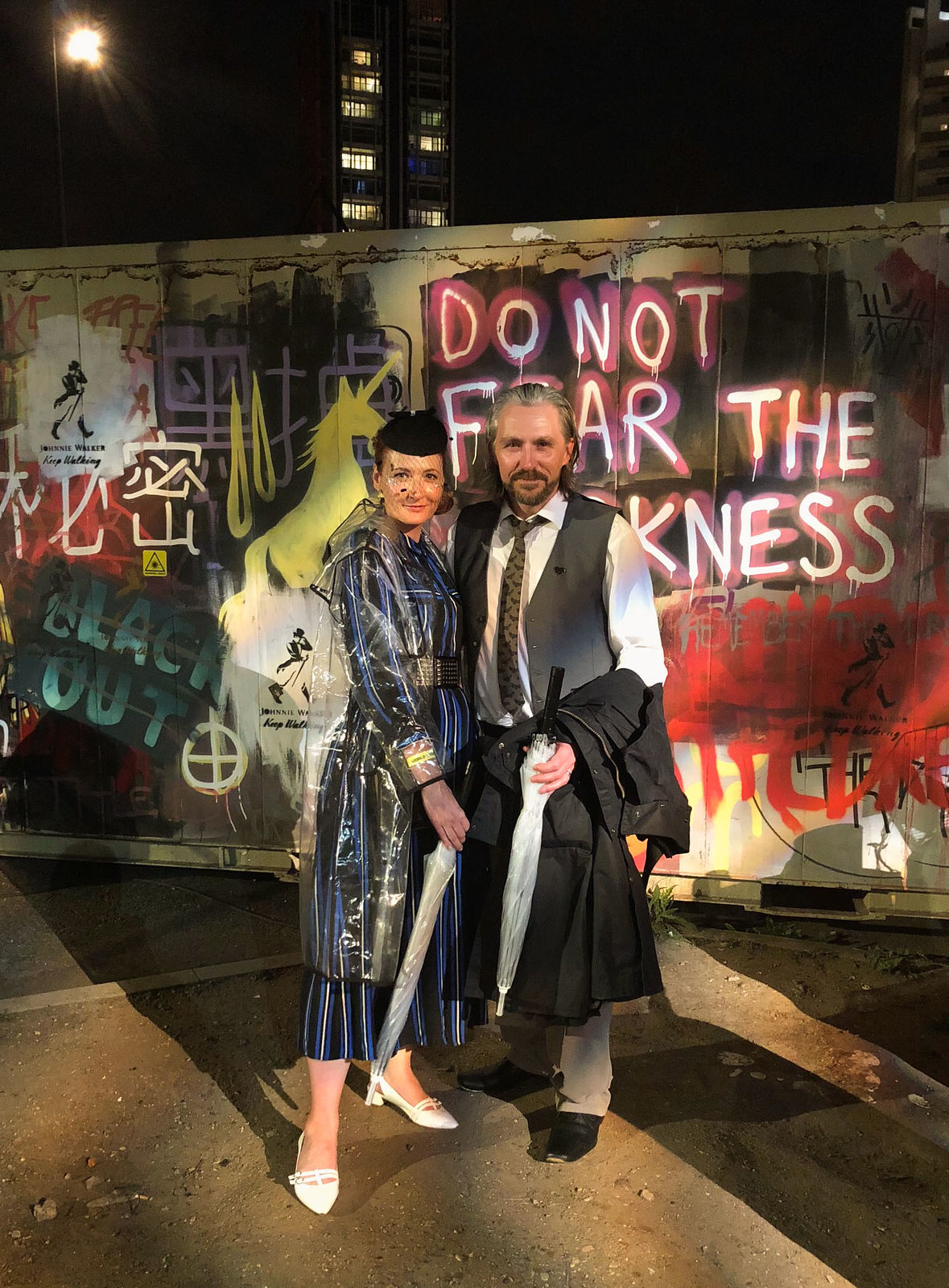 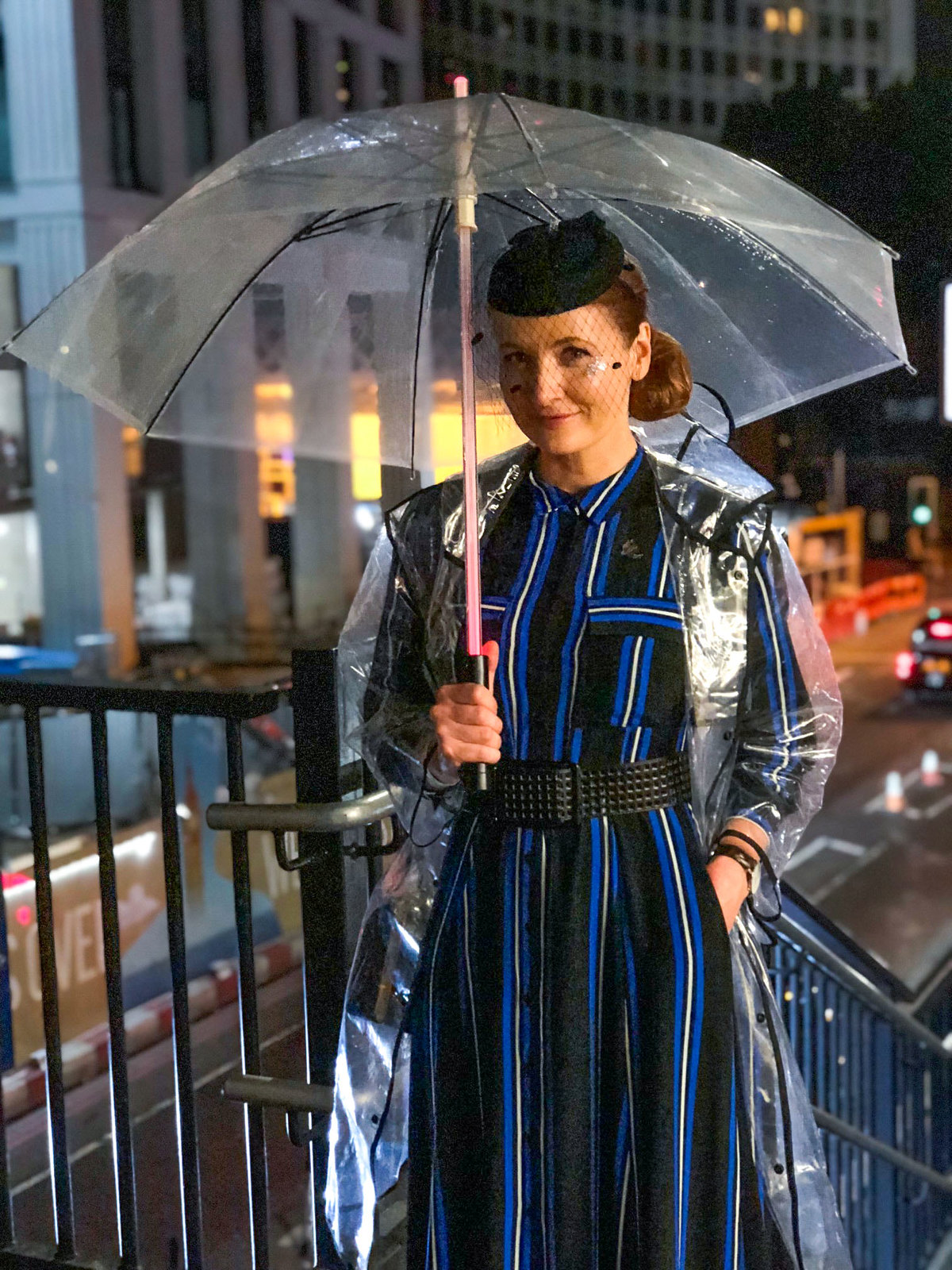 Thank you for joining the #iwillwearwhatilike link up! This started as a campaign on Instagram in August 2015 where women over 30 wore everything on a journalist’s list of “inappropriate” items for 30+ women (including leopard print, short dresses and oversized sunglasses. Yes, really). It was so popular that I decided to carry it on weekly where women of all ages link up their fabulous style, never mind what anyone tells them not to wear!

The link up goes live every Monday at around 3pm UK time and will stay open for a week. Whilst the original article was of course aimed at the 30+, you can be ANY age to link up. The only criteria is that you’re wearing whatever you damn well like!

CLICK HERE to read the rules of linking up (and to grab the #iwillwearwhatilike button). Basically it’s just good manners to link back to here – to leave a comment is even nicer!

Want to receive an email reminder for the next link up?

Please note that due to the new GDPR laws I’m unable to send an email reminder unless you subscribe to the mailing list of your own accord. CLICK HERE if you wish to be sent an email with a reminder to link up to the #iwillwearwhatilike link up as soon as it’s live! 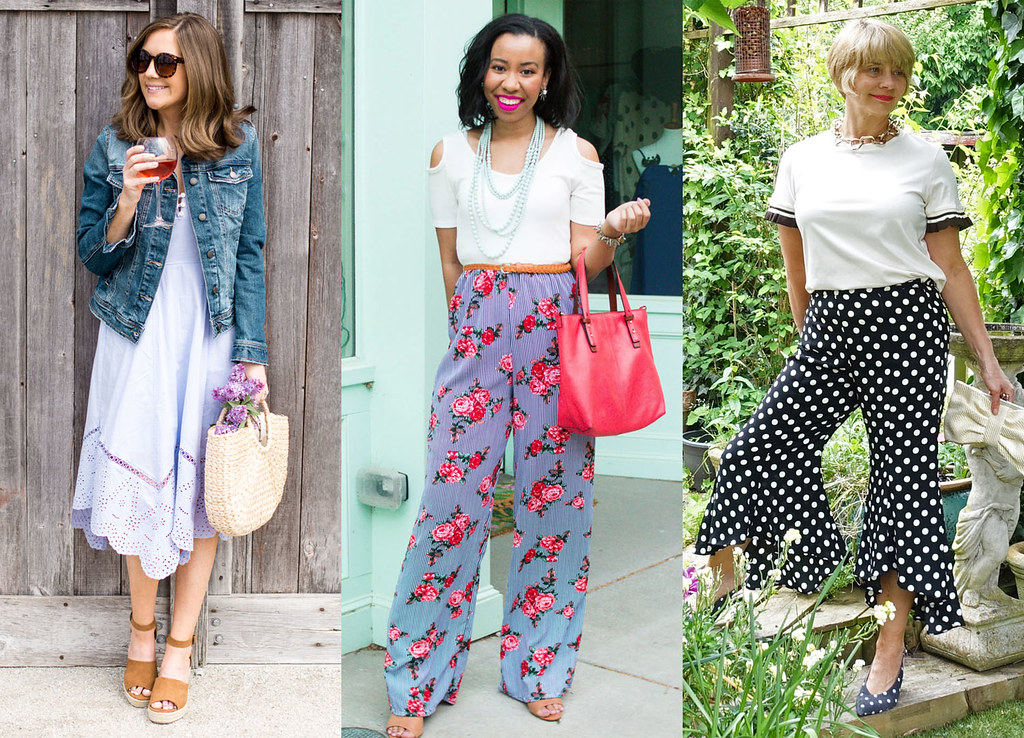 My favourite outfits from last week’s link up:
(L-R) Wishes & Reality | What Nicole Wore | Is This Mutton

To get yourself featured next week, make sure you’ve included a link back to Not Dressed As Lamb or my button in your post/sidebar!

Do share the love and visit as many links as you can (you never know what other lovely like-minded ladies you might meet) – the original Instagram campaign forged some wonderful new friendships so don’t miss out!

P.S. CHECK OUT MY PINTEREST BOARD WITH THE BEST OF THE #IWILLWEARWHATILIKE LINK UPS – HAVE YOU BEEN PINNED…?

Disclosure: This post contains affiliate links which means if you click through and buy I may receive a small commission at no cost to you (click here for my full disclosure)…