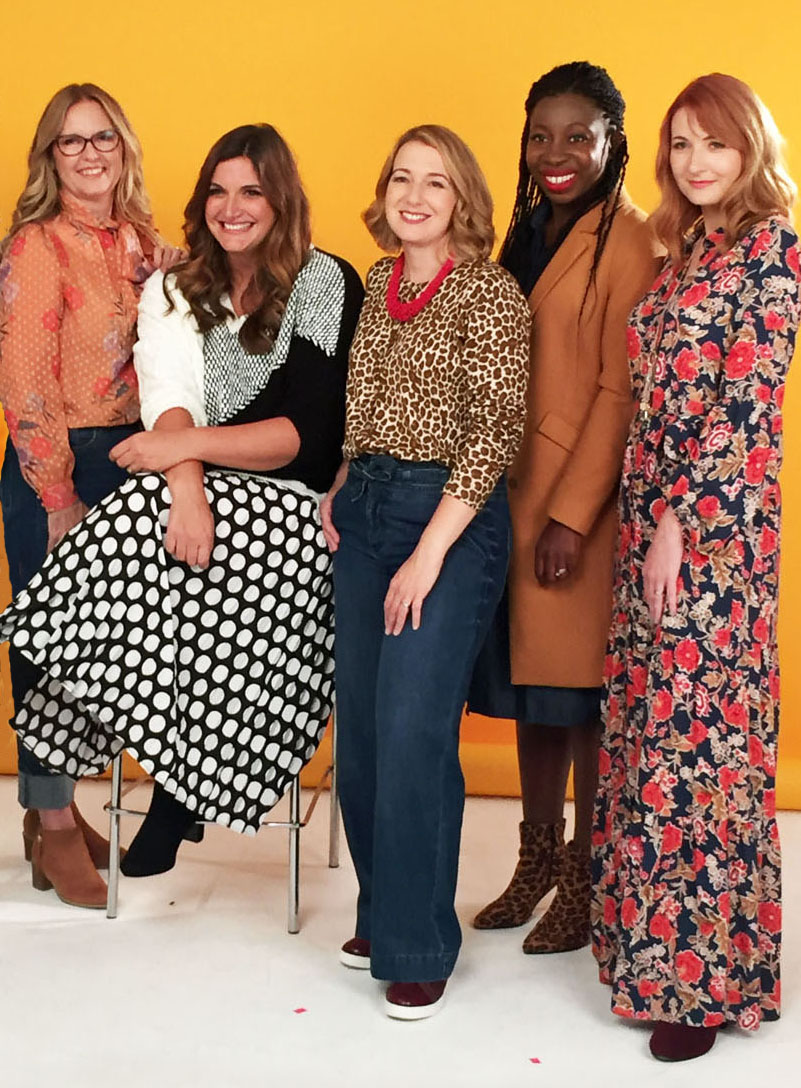 Being able to fake confidence is something many of us do, not least those who seem the most confident to others.

Self-confidence is always a tricky beast, especially when it comes to your own. I’ll warn you now, this is a real up-and-down emotions post…!

On Tuesday this week I was working with JD Williams up in Manchester as part of their new season/total rebranding campaign (you may have seen some of the sneak peeks on their InstaStories which I took over for the day)! It was SUCH a fun day and you’ll see more about it in due course on TV, on their website and on my blog.

The reason I’m writing this is because of the feelings I had before going up to do this job. As a pro blogger I’m often thrown into situations where I have to meet – and work with – new people. Sometimes it can be five or six new people, sometimes (as this week) it can be about 40 or more. The production team on this campaign was enormous, so it meant meeting a lot of new people and making sure that I did what they wanted me to do (that I delivered, in other words).

However, before going to this shoot my self-confidence was pretty darn low to tell you the truth. I can’t say for sure, but I get the impression that most people meeting me probably think I’m quite a confident person. I know I can be a bit on the loud side. I know I show off with my ability to remember everyone’s names when I meet a room full of people. And I know I can be a bit of a joker at times, playing the fool and doing my best to be the centre of attention (all in jest, of course).

But believe me, it doesn’t mean I’m super confident.

When I travelled up to Manchester on Monday I felt pretty crap about myself. Not for anything major, just all small superficial things that built up to me feeling a bit low in general.

These are things I wouldn’t normally share (haven’t shared) with anyone other than Keith and my closest girlfriends. Only they know the way I feel. It was one of those occasions when lots of small things added up to… Well, a big pile of poo, basically. We all have those days. But sometimes we don’t have to go anywhere and we can just stay at home and ride it out.

This wasn’t one of those days. I was going to be in front of a video camera, and talking. There would be nowhere to hide. I had to look good, I had to sound good and I had to be interesting and engaging and smiley. Just all round aaaaaargh…!

Why my confidence was so low

The reason why I was feeling so low was a multitude of things. Firstly – and this is something that many women will identify with – my weight has ballooned this year*. Where last year I vowed to rid myself of the weight I’d put on following my leg injury at the end of 2015, it seemed to have the opposite effect and this week I found out I have, in fact, matched my heaviest-ever weight.

*Important note: This post is not intended to fish for compliments. I haven’t written it to try and get a rush of “Oh, but you look great!” comments, but to show that sometimes the most outward-seemingly confident people also have days (some, maybe all of them) where they are not feeling their best and really have to fake it.

Now I’m fully aware that I do not “look” overweight. I dress in a way that mostly disguises the parts I’d rather not show off. But I’m very, very unfit right now, and it’s not good for my health. If I were to continue the way I’m going – with overeating and almost no exercise – then I WOULD be presenting myself with a serious problem in the near future. So I am, at least, aware of my bad habits and know I need to do something about them.

The way it affects my confidence? It means I can fit into very, very few of my clothes, and almost none of the nicest ones. And as a fashion blogger clothes are my “thing”. Take that away from me and it crushes my self-esteem because I’m not always wearing the wonderful things I want to wear… I’m having to compromise the whole time. Therefore at the shoot I knew I would be looking at the rack of clothes and constantly thinking about what parts of my body they would or wouldn’t cover up. It worried me that I’d end up finding nothing to wear.

The other things that affected my confidence that day were lots of small things but they all just added up:

So all in all, not the best frame of mind to be in when you have to sit in front of a camera and (behind that) a massive team of people who are all looking at, listening to and recording you. In pain, not confident about the way I looked and having to meet a ton of new people – and perform. 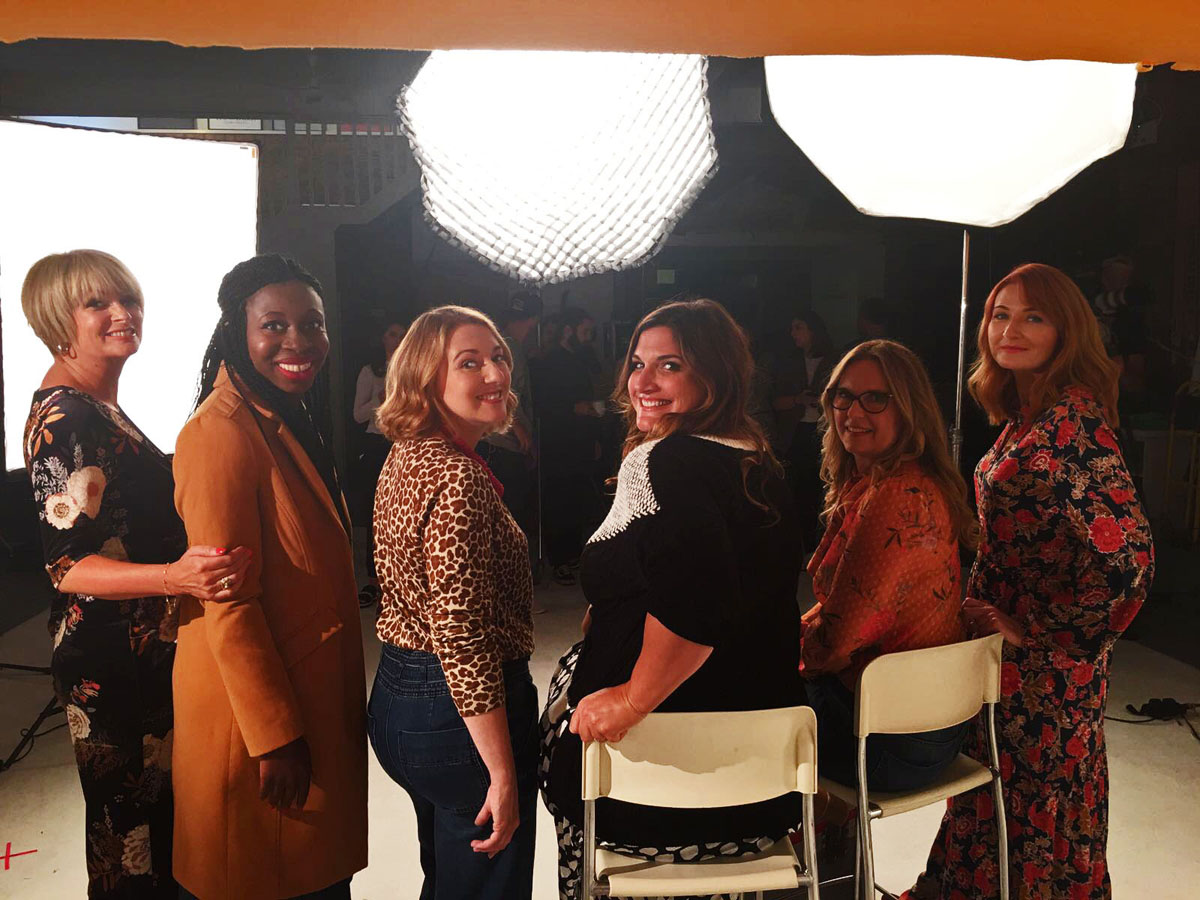 But you know what? There was no time, or room, for being down. Or rather seeming to be down. I was being paid to do a job, and I knew I had to deliver. What you do behind the scenes and away from the camera is as important as what you do in front of it. It was truly one of those times where I absolutely had to fake confidence, and in abundance.

How I fake confidence when my self-esteem is low

Fake it till you make it, as they say… this was one of those times! This was the third time I’d worked with JD Williams, and the first two times were so much fun and the people were so friendly that I was really looking forward to the day, despite my lack of confidence in myself. Of course, I can’t tell you whether I really DO seem like a confident person to others (maybe I don’t at all!), but these are the things I do and swear by:

1. Surround yourself with good people

Obviously it’s not always possible depending on the situation, but where you have control over who you let into your life then make sure you only let in the good ones. Do something about the bad apples that only seem to breed negativity and make you feel bad. Good people will always make you feel good about yourself so there’s no need to fake confidence when they’re around.  I’d enjoyed working with JD Williams as a brand so it was a no-brainer to do it again.

2. Remember that others are worried about themselves, not you

Everyone has their own hang-ups – believe me when I say they’re not bothered about yours! Think of it the other way: How much time do you spend worrying about or concerning yourself with other people and what they’re doing/saying/wearing/looking like? Probably none at all.

3. Don’t bang on about your imperfections

Most people don’t notice your imperfections, and those that do aren’t worth your time or attention. There’s no need to draw other people’s attention to what you’re not feeling confident about – it’ll only serve to make you feel worse (and can make them feel awkward). Dazzle them with your best qualities instead.

This is a great one to make you appear confident. It’s hard to do, but making an effort to pay attention – I mean really pay attention – will impress people. You’ll seem alert and interested, and interesting. My tip for remembering names? Repeat it back to them when people introduce you (“Nice to meet you, Graham“). If you don’t catch their name ask them to repeat it. It’s less awkward to ask someone to repeat their name if you didn’t catch it first time than it is to not know it at all later.

5. See the good in others and pay them compliments

Showing interest in others and making them feel good about themselves will make you feel good in return. Making other people happy is always a confidence-booster. Comment on what they’re wearing, how their hair suits them, say you like their necklace/shoes/sweater or that they have a nice voice. I remember complimenting a waiter on his amazing voice once – he said he’d been thinking of looking to get voiceover work and he said that the compliment had given him the boost he needed, just as he was wondering whether he should do it at all.

On the flip side, learn to accept a compliment. Dismissing them sends a message of low self-esteem and will hurt the giver’s feelings – a simple “thank you” is all it takes. Never, ever contradict them and tell them they’re wrong as you’ll probably never get a compliment from them again.

7. Remember you were invited for a reason

Whatever you’re doing or whatever you’re attending or working on, remember that people want you there (why else would they invite you)? Don’t put yourself down or question why you’re there – accept that people like you! They like you and wanted you there – don’t give them a reason to doubt their decision by being a Debbie Downer.

8. Pay more attention to your hair, makeup and grooming

Looking your best will make you also feel your best. It’s the best thing you can do to give yourself a confidence boost – I was lucky because I had a hair and makeup artist to hand that day, but at other times there’s always the hairdresser or the beauty salon. You never need an excuse to get your hair or nails done, but to boost your confidence is surely a valid one.

Keeping all these points in mind will make you seem like a super confident person. By refusing to be apologetic about whatever you’re not confident about – whether that be your hefty thighs/your unruly hair/your accent/your not-straight teeth – and concentrating on the POSITIVES, you’ll exude confidence.

You might be dying inside, but outwardly people will see nothing but a warm, friendly and engaging person. Someone confident. Someone they want to be with.

And eventually, you’ll just have to start believing it yourself.

At the JD Williams shoot I nabbed the longest maxi dress I could find that covered up everything I wasn’t confident about. I got compliments all day about it (it was a stunning dress). I could have highlighted the fact that I chose it to cover my weight gain, but why would I do that? I also told the MUA exactly how I wanted my hair to try and work with my growing-out fringe.

I ended up adoring my hair in the end, and it made me feel great.

So next time you’re feeling less than confident, just try and fake it. People will never know the difference…!

HAVE YOU EVER HAD TO FAKE CONFIDENCE? TELL ME IN THE COMMENTS!