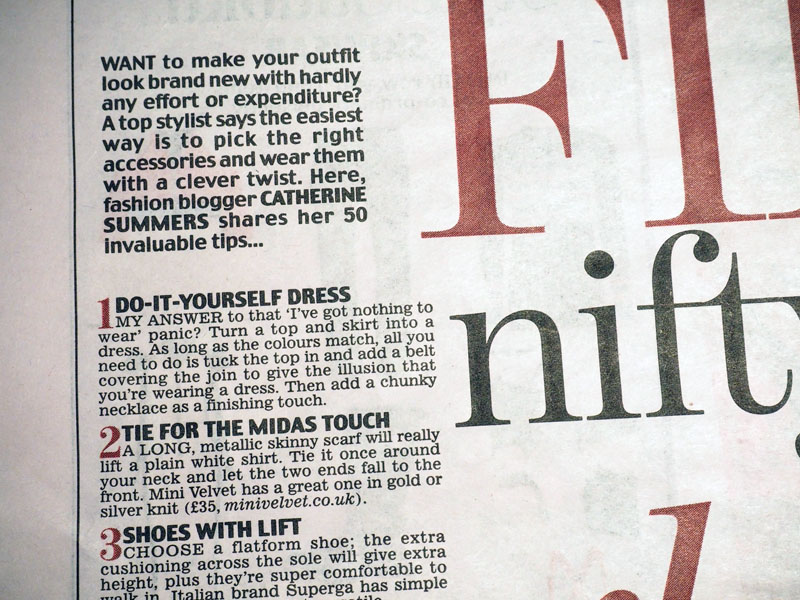 You know when people say you shouldn’t believe anything you read in the papers?

And we all sort of know it but still look at headlines and think, Ooh, guess what so-and-so’s said/done…? Well I’ve just had a little taster of that, but I was on the receiving end, meaning I was the one who was adversely affected by something in the papers that wasn’t accurate. To explain…

On Thursday this week I had a tweet from a lovely reader (hi Gail!) to tell me that she enjoyed my article in the XX paper.

WHAT the what?! The only article that I’d written for that paper (which shall remain nameless) was written a year ago, and they’d paid me a kill fee – this means they’d decided not to run it but they paid me anyway.

However, this article was published yesterday without my knowledge, so it was lucky that I was told by my fellow Tweeter otherwise I’d have completely missed it and been none the wiser that it was out there. Why they’d decided to run it a year after it was written is anyone’s guess, though I think it may be because they only paid me for it a couple of months ago.

Yes that’s right, about 10 months late. Some of you may have read the post I wrote back in September explaining about my financial difficulties as a pro blogger and how I was owed money from all over the place – well, this article was “the national newspaper” I mentioned in the post that I was still chasing for payment many, many months later.

So it seems only fair that the article was eventually published… that I don’t have a problem with. Unfortunately the article was so different to what I originally wrote that some of the “50 nifty tricks to instant glamour” made me cringe because I would never, ever have written them that way.

For example, I wrote:

“Don’t neglect what you wear under your clothes. A well-fitting bra can make all the difference to the look of your outfit and give you a huge confidence boost. Get professionally measured to make sure you’re wearing the right size.”

“Don’t neglect what you wear under your clothes. A well-fitting bra can make all the difference to the look of your outfit and give you a huge confidence boost. Go down a back size and up a cup size for a better fit.”

Unfortunately I had a complaint justifiably emailed to me this morning because one of the items that was suggested was no longer in stock, and she couldn’t have looked it up any quicker than the day the article came out. Luckily I emailed back after having sourced some alternatives, and I now have a very happy reader and hopefully a new fan – she replied to tell me her faith had been restored. A good result.

Regrettably I had no control over the items they chose. In fact I had no control over the whole article once I’d agreed to the kill fee. But my name was on it, my blog URL was on it, and as far as everyone reading it was concerned, I was the one dishing out rubbish advice and suggesting out of stock items. It gives me a bad name and unless someone contacts me to complain, I have no way to defend myself – except by writing this post by way of explanation.

Therefore it’s quite true when they say “Don’t believe everything you read in the papers”. Even something that seems as legitimate and harmless as an article talking about ‘nifty’ (when would I ever use the word nifty?!) fashion tricks.

I believe that people are misquoted and rewritten all the time in journalism – so do please take it all with a pinch of salt, and always give people (even the writers) the benefit of the doubt…!

HAVE YOU EVER BEEN ADVERSELY AFFECTED BY JOURNALISM THAT YOU WANT TO SHARE? TELL ME IN THE COMMENTS!