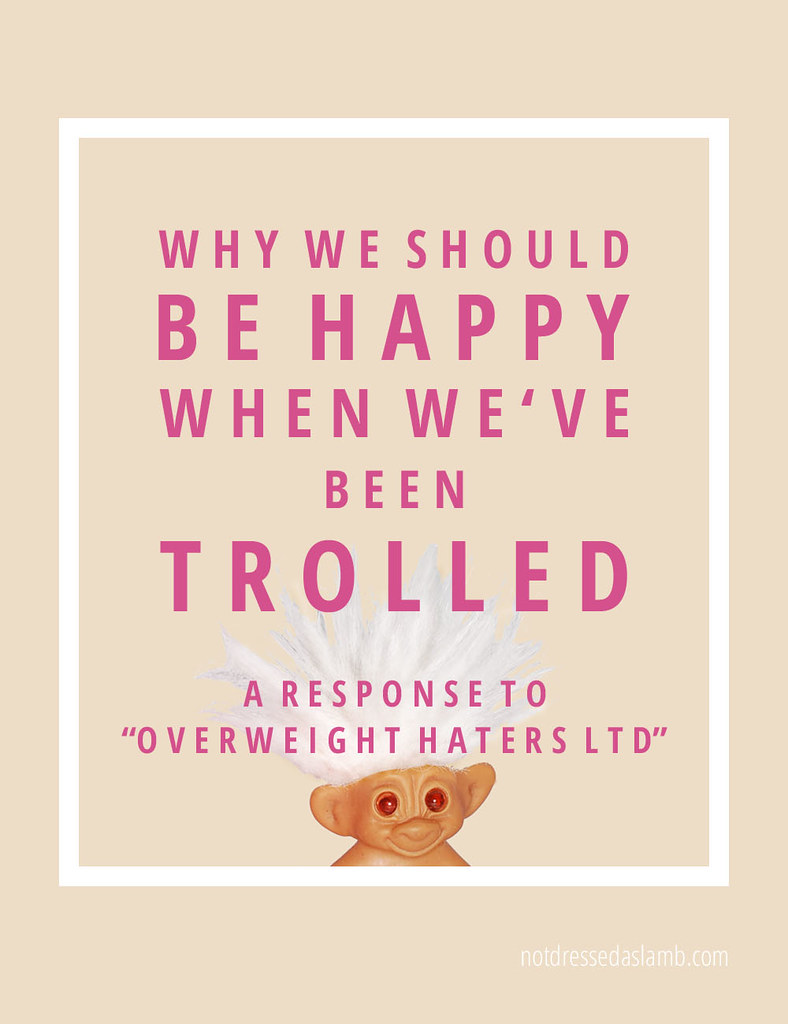 Trolling: Once again it has reared its ugly head and made the headlines this week. Sunday/Monday saw the latest case of trolling to go viral on social media. This time, however, the trolling happened in real life – not online.

You may have read about “Overweight Haters Ltd”, an organisation (which may or may not have consisted of one man or several) who were giving out fat-shaming cards on the London underground.

If you didn’t see it, be warned that your blood is guaranteed to boil.

The card below was given to a woman on the tube and she bravely posted it on Twitter:

Apparently, the women who have been handed these cards (because yes, it turns out it wasn’t just one) are given them and then the brave chap immediately jumps off the carriage as the doors close. Of course this allows him to simply inflict maximum emotional pain without actually sticking around to find out what her reaction might be or to allow her a right to reply. (And, as un-PC as this sounds, we all secretly wish her knee had been given the chance to connect with a particular place on his person.)

AS UN-PC AS THIS SOUNDS, WE ALL SECRETLY WISH HER KNEE HAD BEEN GIVEN THE CHANCE TO CONNECT WITH A PARTICULAR PLACE ON HIS PERSON.

I could easily make this a 10,000 word post/essay on why trolling and any kind of shaming and hatred is just so utterly vile and cruel and TOTALLY unnecessary… What purpose does it serve? Why do they feel the need to inflict pain on others? Why can’t they channel that energy into something that helps other people instead of making them feel lower than low?

There is so much to say about the subject of trolling, and so much more to be said about this latest case, but I will try to keep this short and sweet (though I may struggle).

There was a huge amount of (fully justified) outcry on the internet about this, with most expressing their horror and a few right-to-replies with an equally vitriolic flavour and some colourful language.

However, I spotted the potential for a little tweaking of the same card for a reply of my own which I promptly tweeted (scroll down for the larger version which is easier to read): 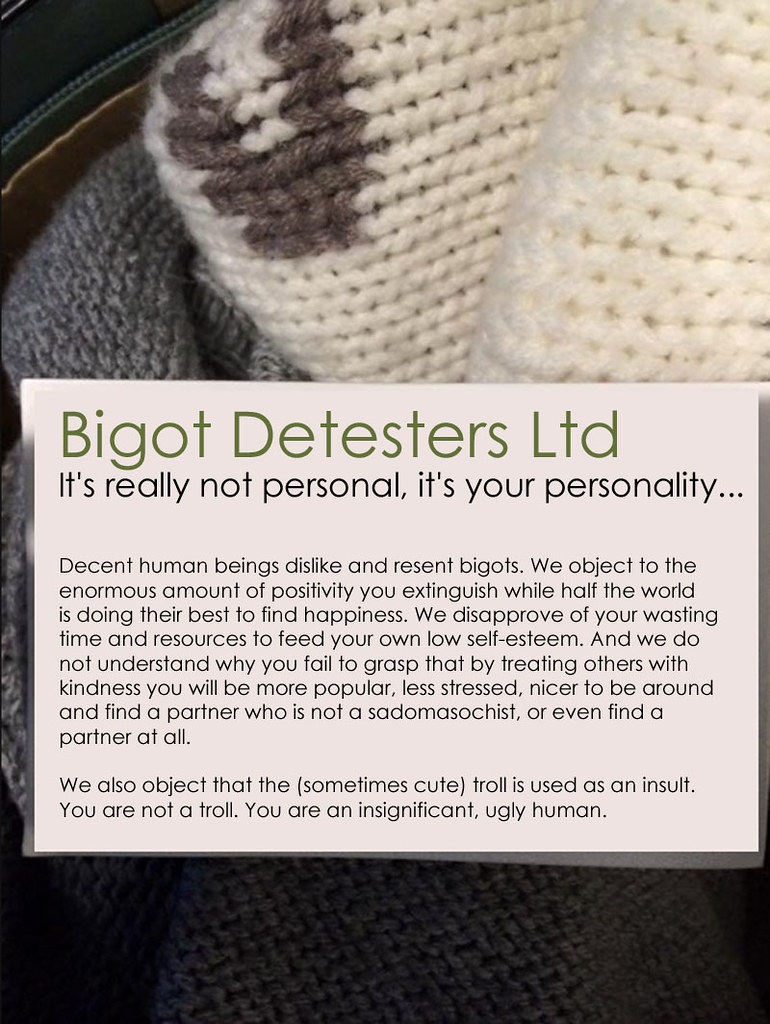 I felt there was no need to reply with more hatred towards them – as my mother always said, “Never lower yourself to someone else’s level”. And although I’ll always stand by that advice, I’ll admit it can be incredibly hard to follow – I’d be lying if I said I’ve followed it in real life every time.

I received a few revolting replies of my own to my tweet, such as “I’d rather be a bigot than a fatty” and “Let’s be honest, everybody hates fat people”, and “At least I’m not a self-righteous blogger trying to get attention”. Seriously???

I’m stunned they can’t see the irony in replying that way. My reaction, as I mentioned in my post about how to respond to negative comments and trolls, was simply to say how wonderful it is that they’re sure to have such a happy and contented life ahead of them, and to have a lovely day. And then blocking them (with a great big dollop of pity).

If there are people in the world who set up “organisations” like Overweight Haters Ltd thinking it is actually a good idea (or that they somehow get off on being hateful), I honestly think there isn’t much hope for them. The fact that they can’t see that being kind and offering to help people rather than shame others into feeling bad about themselves means that they will probably never make that connection between right and wrong.

THE FACT THAT THEY CAN’T SEE THAT BEING KIND AND OFFERING TO HELP PEOPLE RATHER THAN SHAME OTHERS INTO FEELING BAD ABOUT THEMSELVES MEANS THAT THEY WILL PROBABLY NEVER MAKE THAT CONNECTION BETWEEN RIGHT AND WRONG.

As we all know there’s enough hatred happening in the world right now, and we sure don’t need more of it.

So why have I said that we should be happy when we’ve been trolled?

There’s no denying the fact that trolling is absolutely despicable. Any decent person wouldn’t wish it upon anyone. However, it does happen and will probably continue to happen, no matter how much we wish it wouldn’t.

I know it’s difficult, but the one thing that we should remember when we’ve been trolled is this:

Be happy you’re not that person. Be happy and thankful that you’re not a bigot, or full of hate, or insistent on spreading that hatred around – because you are a kind and decent human being. Be proud to be you.

BE HAPPY YOU’RE NOT THAT PERSON. BE HAPPY AND THANKFUL THAT YOU’RE NOT A BIGOT, OR FULL OF HATE, OR INSISTENT ON SPREADING THAT HATRED AROUND – BECAUSE YOU ARE A KIND AND DECENT HUMAN BEING.

BE PROUD TO BE YOU.

The trolls are only highlighting what repugnant people they are (and what a kind-hearted person you are) because you know and understand how abhorrent and socially unacceptable their behaviour is. They don’t.

When the people in my life have been wronged by someone in some way – whether they’ve been a victim of road rage, annoyed by miserable customer service or had a run-in with an unreasonable neighbour – the thing I always say to them is this:

You’re a kind and decent human being – be smug in the knowledge you’re not them.

[Addition 04/12/15: I was reminded in the comments by Stace about the website that was cleverly set up: http://overweighthaters.com – it’s not what you might think..! Seems the people behind the cards forgot to register that dot com, and it’s been taken now and used for good. Massive kudos to them.]

Have you (or someone you know) been the victim of any sort of severe trolling or hate crime? How did you deal with it? Tell me in the comments or tweet me @notlamb if it’s easier.

P.S. You might also want to read How to Respond to Negative Comments and Trolls