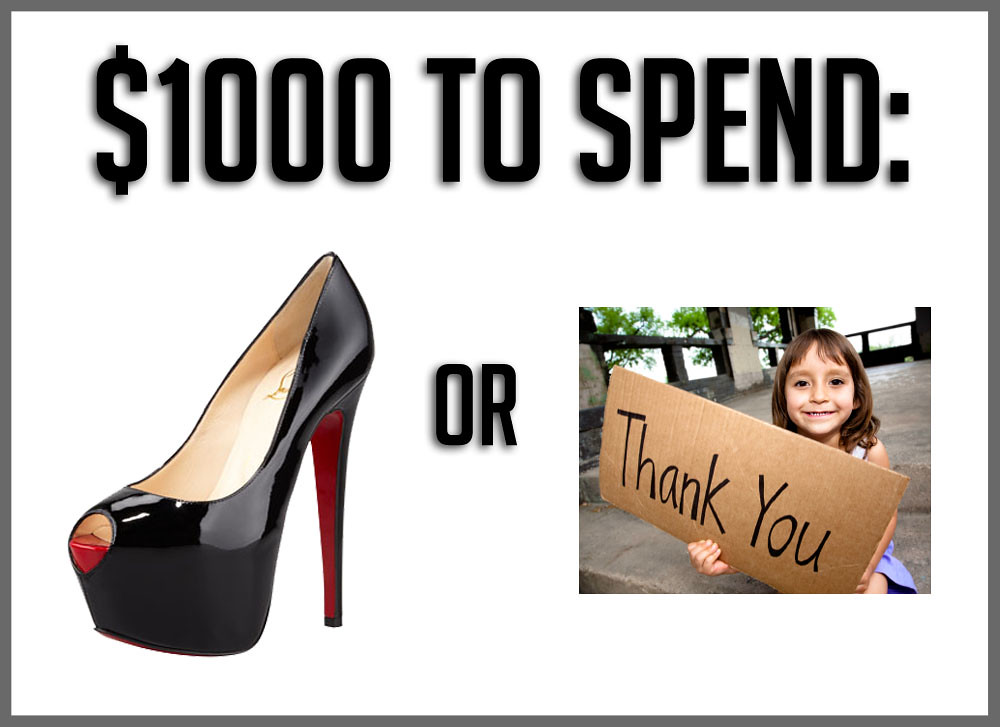 You may or may not have seen that I’m co-hosting a massive giveaway to win a $1000 Visa giftcard at the moment – there are still a couple of days left to enter, so if you haven’t yet and you’re a US resident, click here to get your entries in 🙂

It was suggested amongst the participating bloggers that if we wanted, we could each write a post about what we’d do with $1000: as I’m a UK blogger I have to think Sterling, so that’s about £660. That’s easy, I thought: Louboutins… they’re about 600 quid. Who doesn’t want a pair of shiny red-soled heels? Easy post to write.


I can’t post about buying Louboutins… on Red Nose Day.
BUT the sensible grown-up in me reared its angelic (boring?) head. When I realised the day for which I’d scheduled the post was also Comic Relief Day (one of the UK’s biggest charity fundraising days, also known as Red Nose Day), I had an attack of the “I can’t post about buying Louboutins with a windfall of 600 quid on Red Nose Day”. Too late to reschedule as the giveaway ends on Sunday… I still had to go ahead and write it.

So I know what you’re probably thinking at this point: oh right, she would give it away to charity. The end. How very noble of her. Except there’s a little bit more to it than that, and I have the most amazing little story to tell you, if you can just bear with me for a bit longer (thanks for sticking with my ramblings up to now)!

The winner should… treat themselves with their win
Firstly, I should say that I don’t in any way think that the winner should feel the need to do something other than treat themselves with their win – after all, I came into some inheritance (of a similar amount) a few years ago, and I certainly treated myself: I bought an expensive leather bag, got my teeth whitened, bought several pairs of shoes and put a chunk towards our holiday-of-a-lifetime to San Francisco and the Grand Canyon in 2011. It felt good at the time to spend the money on myself, and I was under strict “instructions” to enjoy it. What I’m writing about here is pure speculation, I haven’t won (and can’t win) the money. It is simply what I would do, not what I think anyone else should do.


So I got to thinking: at my age (40), and having spent a good few years spending money on myself, I thought that I really do have enough pairs of shoes. And handbags. And clothes. I honestly don’t think I’d get as much satisfaction out of the money as I would if I were to put it to some sort of use – something that might have a slightly longer-lasting effect than a pair of heels with a red sole that would probably kill my feet after half an hour of wear.

The We Are Lucky Project
I read a great article in last month’s Marie Claire about the We Are Lucky project (http://we-are-lucky.com), set up by a man who came into a lot of money in 2012. He straight away booked a place on the Virgin Galactic Space Flight. However, his conscience got the better of him, so he cancelled the flight and decided to do something more worthwhile with the money. He ended up travelling the world and picking kindly-looking strangers in the street to give £1000 to, with the only stipulation that they had to do “something good” with the money. They then shared their experiences and story on his website. Isn’t that completely amazing? What a totally selfless, kind man he must be. It reminded me of the Channel 4 programme “The Secret Millionaire” (one of my favourite reality TV shows) which has a similar theme: send a millionaire undercover to a deprived area of the UK for a week or so posing as someone from a similarly deprived area or background. They then decide to give money to the people they’ve met during their time there who they feel deserve a break in life, and to whom the money would make a big difference. I’m in bits at the end of every programme.

A donation… would be so much more rewarding.
Now of course I’m talking purely hypothetically about what I’d do with the money, as I can’t enter of course (even if I were allowed it’s for a US resident to win $1000). But personally, at this stage in my life I think I’d want to seek out a particular individual who is in need of that money and hope it would make a difference to their life. I’m talking a young carer who deserves a holiday, someone in ill health who needs an operation badly, a local charity that requires some equipment to help make the lives of the people they help easier. I have enough shoes to last me a lifetime, and another pair would only sit in a long line of other shoes on my bedroom floor, looking at me and wondering when it’s going to find a permanent place in my home. A donation to a special person or organisation to help improve their life would be so much more rewarding to me personally right now. After all – $1000 doesn’t exactly mean I can give up my day job! However, I’ll be honest with you: twenty years ago would have been an entirely different scenario and I would have spent the hell out of 600 quid.

Have a great weekend everyone – don’t drink too much of the black and white stuff on St. Paddy’s Day – and enter the giveaway NOW if you haven’t yet! There’s still time! 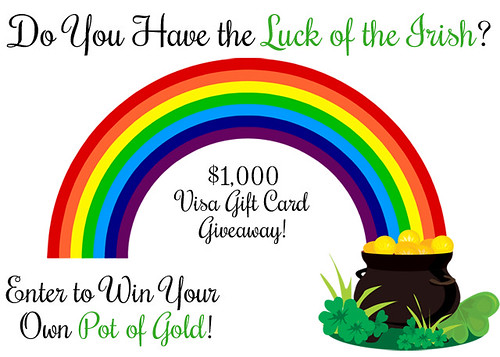