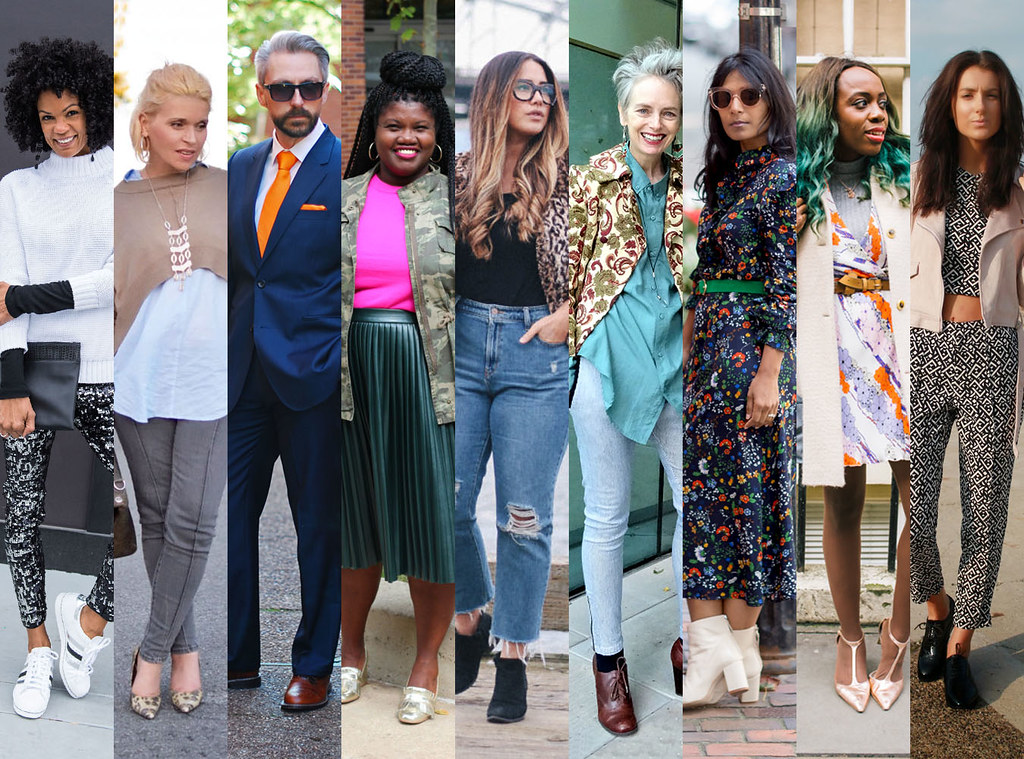 “The majority of the finalists are white. The fashion finalists are all female, and there’s not a single plus size girl among them.”

This is a quote taken from a blog post written in response to the announcement of the UK Blog Awards finalists by a blogger who didn’t make the finals. You may or may not know, but I’m the judge for the UKBA fashion category.

Whilst I’m not going to credit the author for an (often factually-incorrect and largely speculative) blog post, I WAS hurt at the accusations. Especially when I was personally very upset at the lack of diversity in the final eight when the list was published.

(Note: NOT the same as upset at the actual list of finalists.)

And on the matter of judges’ scores, there were three criteria we judged the entrants on for them to progress to the finalist stage: design and ease of use, quality of content, and relevancy [to the category].

There was no criterion to score bloggers for their diversity. I could not, quite rightly, score anyone higher just for being male, or plus size, or over 50. Or for being a person of colour or a blogger with a disability.

That would go against everything that is fair about the judging process – that your score is based on merit, and merit alone.

So that ultimately meant that if zero male fashion bloggers entered (i.e. were nominated/nominated themselves), there would be zero male finalists. And even if there were MANY male entrants (for the sake of argument I’m not actually saying how many males there were – to be honest I don’t know), then they had to score highly enough in those three criteria to be in the top eight AS WELL as gain enough votes.

[Image composed of bloggers I have featured here on the blog in the past, from left to right: Fashion on the Fourth Floor | Style is My Pudding | Silver Londoner | Grown & Curvy Woman | Alicia Fashionista | Bag and a Beret | Petite Style Studio | I Want You to Know | Strut in Her Style]

First, to put paid to one misconception among the entrants: Everyone who entered would get to the first round and therefore be a nominee. Many nominees were ecstatic to have made it to the first round and couldn’t believe their luck. Without wanting to rain on their parade, the awards are open to ANYONE resident in the UK who has a blog, with just one exception. UKBA were quite clear right from the start that they would be screening for influencer fraud using SocialChain’s Like-Wise tool, so if anyone that entered didn’t make it to the first voting round, that was why.

And if they weren’t a UK resident, they too could not progress any further. Finally, it also seems very obvious that to enter the UK Blog Awards you have to have a BLOG, but believe me many were online retailers or magazines, not blogs at all… yes, really!

Therefore we were looking for bloggers who were honest, in the UK, and er, bloggers. Not retailers or blogs belonging to a business.

The UKBA have been very transparent about how the judging process works: the first round was where the blogs were rated by way of 60% from judges’ scores, and 40% from votes they’ve gained as explained above. Then the final eight for each category will be judged by two category judges and the winners are ultimately adjudicated by UKBA themselves.

I cannot stress this enough: Lack of diversity can be an issue as someone can only judge the valid entrants put in front of them. I can’t magic up more males or plus size nominees at the click of my fingers. And the quality of their blogs has to be high enough to get into the top eight, and they had to have campaigned for enough votes to make up that 40% to get into the top eight.

Therefore, to be criticised for not having any males hurts my feelings, because I WANTED more quality male bloggers in the list of nominees; they just weren’t there. I was sorely disappointed that there weren’t more plus size bloggers, or more bloggers of colour for me to judge.

I simply worked my way through the list of bloggers, in alphabetical order, giving a score for each criterion. I submitted my scores to UKBA. And the finalists were made up of those who had the combination of highest scores and highest votes.

At no time did I score bloggers and think about whether they “should be” in the top eight, or keep tabs on what “type” (for want of a better word) of bloggers were the top scorers as I went along. (There are too many blogs to judge to start thinking that way.)

The truth about the diversity issue in this instance

I mentioned right at the beginning that I was personally disappointed at the lack of diversity in the fashion finalists. Please, please, PLEASE understand, however, that I am most certainly NOT disappointed at the actual list of bloggers themselves; I stand 100% by the list. I will continue to defend these eight fashion blogs as the fashion finalists because they are all of a VERY high standard.

What the bloggers who chose to criticise UKBA failed to understand is that you can’t control who enters awards. You can nominate someone on their behalf, but it is up to them to accept the nomination.

During the nominations period I myself nominated LOTS of bloggers of/from different niches, ages, sizes and colours. (I will admit I didn’t nominate any male bloggers as I really only “know” one UK male blogger.) Of course they may have already nominated themselves, in which case it’s an automatic route to the first judging round (fraudsters excluded).

Sadly, most of the bloggers I put forward didn’t accept the nomination.

What we can ALL do to increase diversity at awards events

As a judge I would have LOVED to have seen a plus size blogger as a fashion finalist. The same goes for a male blogger, a blogger of colour, and so on. But the truth was that those more diverse bloggers just didn’t quite score enough, or perhaps didn’t gain enough votes, to make that final eight. (The judges don’t have access to the number of votes the nominees received.)

When I announced on my blog I was the fashion judge, I made a BIG point of encouraging bloggers I knew – and those followed by non-blogging readers – to enter. Guess what: a record number of bloggers over the age of 40 were nominated. I’m not saying that was all down to me, but hopefully I had a little bit to do with it. The fact that I won the actual Fashion & Beauty category two years in a row at UKBA was hopefully another incentive for older women: Being over 40 is NOT a barrier to success and to working in an industry that traditionally favours the young.

I was proud to have been nominated (never mind winning!) and to have represented older bloggers.

“The thing I always said that was most important about being nominated – more so than winning – was the fact that I was representing older bloggers, in my case the over 40s. If no over 40 bloggers enter the UK Blog Awards (or, indeed, ANY blog awards), then we won’t be represented in any way. I think it is VITAL that a good proportion of those eight finalists (I’m talking specifically about the fashion, beauty and lifestyle categories here as they’re the industries that traditionally favour the young) are older. It’s also vital that we recognise plus size bloggers. And bloggers of colour. And bloggers with disabilities. (You see where I’m going here.) It brings me back to the point of not being invisible.

Because the point of blogging – and the blogosphere – is the fact that we can access regular people, and hear their voices, and see their imagery. Regular people come in ALL shapes, sizes, colours, ages, abilities, etc. We WANT to read what ordinary people have to say and to read their stories, because that’s how we find out that they’re actually extraordinary. Let’s not allow the blogosphere (=cough= Instagram) to become oversaturated with homogenised “beautiful people” that we’ve been seeing in traditional advertising for decades.

Don’t get me wrong – I love and appreciate seeing a girl who is model material as much as the next person, but is that all I want to see? No.”

And when the nominees were announced, I wrote a post championing the older bloggers and encouraged everyone to vote for them.

The final result is that we have two fashion finalists over the age of 40. I call that a win. The blogger that I quoted above (and admittedly, a few others who wrote similar posts) failed to mention the fact that we have age diversity in the fashion category. We have one teenager, a few (I assume) 20-somethings, and two over 40s (NEXT year, 30-somethings and over 50 bloggers!).

THIS IS HUGE considering the still-abundant age bias towards 20 year olds in the fashion industry.

What is also great about the new system – the mix of judges’ scores and readers’ votes – is that stops it becoming a popularity contest. Bloggers can become finalists because of their talent, not just how willing they were to ask every Tom, Dick and Harry out there on the internet to vote for them.

A second result: the eight fashion finalists are a COMPLETELY NEW set of bloggers compared to previous years. The new system has freshened things up. I can say that this category was becoming a little stale as three of last year’s finalists had been finalists three years’ running… and I was one of them. I was getting bored of seeing MYSELF in the nominations year after year (she says with her tongue firmly in her cheek, but you know what I mean).

My point is this:

In order to have more diversity in something like the UK Blog Awards, we have to encourage more diverse groups to enter. Instead of going online and moaning about the lack of diversity in the final line up (one declaring she would never have anything to do with UKBA again), wouldn’t it have been better if those bloggers had decided to encourage particular groups/bloggers to enter themselves – and others – the following year?

I did. That means everyone else can do it too.

Want to make a change? Then ACT. Don’t just whine about it.

WHAT ARE YOUR THOUGHTS ON DIVERSITY IN BLOGGING AND THE WAY DIFFERENT BLOGGERS ARE REPRESENTED (IN AWARDS, AT EVENTS, IN BRAND CAMPAIGNS, ETC.)? TELL ME IN THE COMMENTS!

P.S. Please post with kindness… as Refinery 29 says: Start a conversation, not a fire. Any offensive or disparaging comments, or those designed to provoke a negative reaction, will be deleted.

Disclosure: This post was not sponsored or endorsed by the UK Blog Awards (I am not being paid to be a UKBA judge). All opinions are my own and do not necessarily reflect those of UKBA.