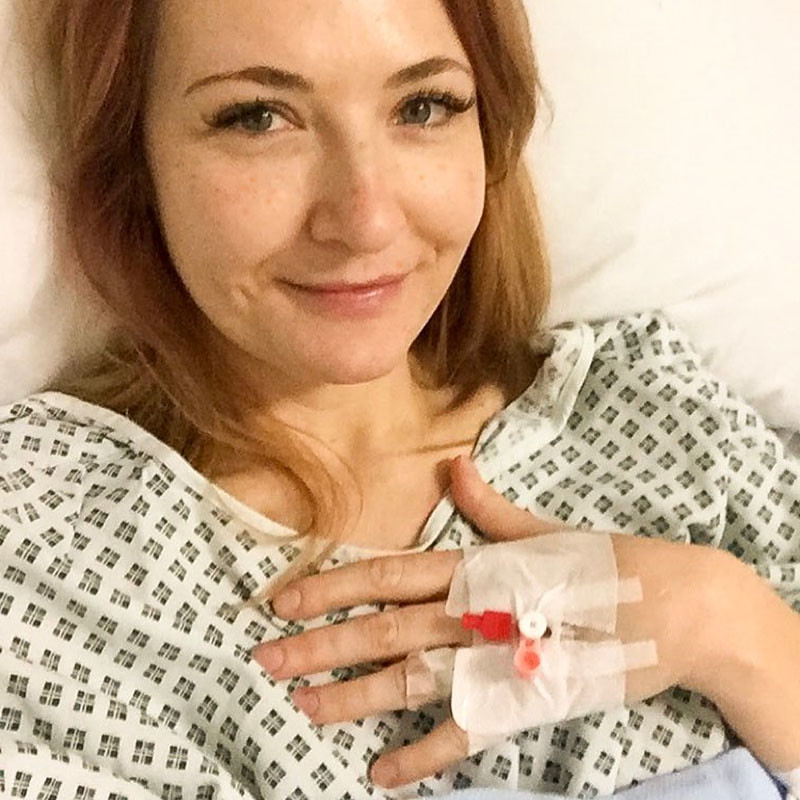 So I had my operation on Monday and I’m so glad to say it was the lesser of two evils in the end: Keyhole surgery for the win!

I can’t BEGIN to tell you how relieved I am that it wasn’t major surgery in the end. I’m also completely overwhelmed to have had so many well wishes sent my way both before and after the operation on the blog and social media. They honestly made me feel so much better, so a massive THANK YOU for those – I may have been very tired and sore, BUT! in my head I was running round celebrating the fact that it was all over AND the beginning of the end, as it were.

The good news is that the operation was a success – the cyst was removed and the doctor was more than happy with how it all went. It was actually attached to the pelvic wall, not an ovary or my womb, so those bits are all intact and healthy I’m glad to say.

The size of the cyst

Here’s the scary part: The cyst was HUGE, or it was at least compared to the size that had originally been described following the MRI and CT scans, which was 7cm long. So I was expecting something the size of my little finger, wouldn’t you think…?

Well, no – after I came to and the doctor came to see me and explain how it all went, he said the cyst came out fine and was “about this big”. He held his hands up with fingertips just touching as if he was holding a ball and my eyes nearly popped out of my woozy head. I asked, You mean, like an orange?! – and he said Er, no – a LOT bigger than that…!

Therefore I’ve been describing it as a large grapefruit, because good GRIEF when he showed me the photos of the cyst during the procedure (sounds gory I know but I love stuff like that) it looked absolutely enormous.

It was drained (hence how they managed to get it out with keyhole surgery only) and part of it was removed. The not so good news is that because part of it is still left then there’s a chance that it could come back again, but at least we now know I have it and we can keep an eye on it.

It’s no wonder I’ve had strange pains and numbness in my leg for two years with a cyst that large. I’m stunned that it wasn’t making my belly bulge out more on the one side. I’ve always had quite a flat belly when I’m fit and healthy, but since putting on weight (due to not being able to exercise properly since my leg has been so sore) I’ve had a much, much rounder tum than usual. I guess the cyst was part of the reason why.

Anyway – I was allowed to go home the same day thankfully and I’ve been at my parents’ house since so that Keith can go to work. They’ve been absolutely wonderful, especially as they’re in their 80s and not all that mobile themselves. I have stairs at home and no downstairs loo – mum and dad have a bungalow so I would have been going up and down stairs to either feed/let Riley out or go to the toilet myself if I’d gone back home. Without the stairs it has been SO much easier.

I’ve been a very good girl and not done any blog work till this post today – I’ve only replied to blog and social media comments and rested every day. I enlisted the help of an assistant (my niece!) to look after my Inbox and post updates to my social media (I had already written and scheduled Monday and Wednesday’s posts in advance of the operation). And that’s pretty much been my week since Monday, with pain killers in between snoozing and trying not to sneeze (OMG I did once yesterday and it was EXCRUCIATING). The worst bit has probably been the shoulder pain – I was warned about it being a strange side effect but golly, it’s painful.

The irony is that all of this was to sort out a very painful leg/knee and numbness, and it’s my legs that actually feel the best part of me! But I’ve been able to sleep in bed with my legs stretched out flat without them hurting for the first time in ages (longer than I can remember) and a lot of the numbness has gone.

In a nutshell then I’m sore, I’m somewhat immobile but I can tell with each day I’m getting better. My parents have been wonderful and I can’t thank them enough for making me meals and getting me cups of tea and walking Riley for me. I did take him on a short walk this morning (I should call it a “shuffle”…) and it was good to get some fresh air for the first time all week. Thankfully he doesn’t pull at all – he simply walks next to you WHATEVER pace you go, no matter how slow. What an angel – he can sense there’s something not right with me because he hasn’t bothered me for walks or anything and has just stood next to me with his head in my lap before lying on his bed again.

Going back to work

I now have decisions to make about when to get back into going places for blog work again. I have a conference coming up in a few days’ time (that I’d already bought a ticket for ages ago) that I need to make a decision about, as well as a HUGE opportunity with a huge brand that I would ordinarily jump at the chance to do, but it involves a long flight and several days away quite soon… I need to speak to my doctor and ask his opinion on what I should do. I’d be devastated to miss working for this brand but my health absolutely has to come first.

WHY did it have to come so soon after my operation…?!

HAVE YOU HAD A SIMILAR EXPERIENCE THAT YOU WANT TO SHARE? TELL ME IN THE COMMENTS OR TWEET ME @NOTLAMB!

P.S. A lot of people remarked on how “glamorous” I looked post op (thank you)… I can tell you that it’s the eyelash extensions that make the difference! You can get away with no makeup but still look made up with them – I thoroughly recommend them for making you feel better after an operation (or any time) when you have ZERO inclination to do anything to your appearance.

– A Final Medical Diagnosis, Two Years On
– Sharing My Medical Misdiagnosis and the Importance of Getting a Second Opinion