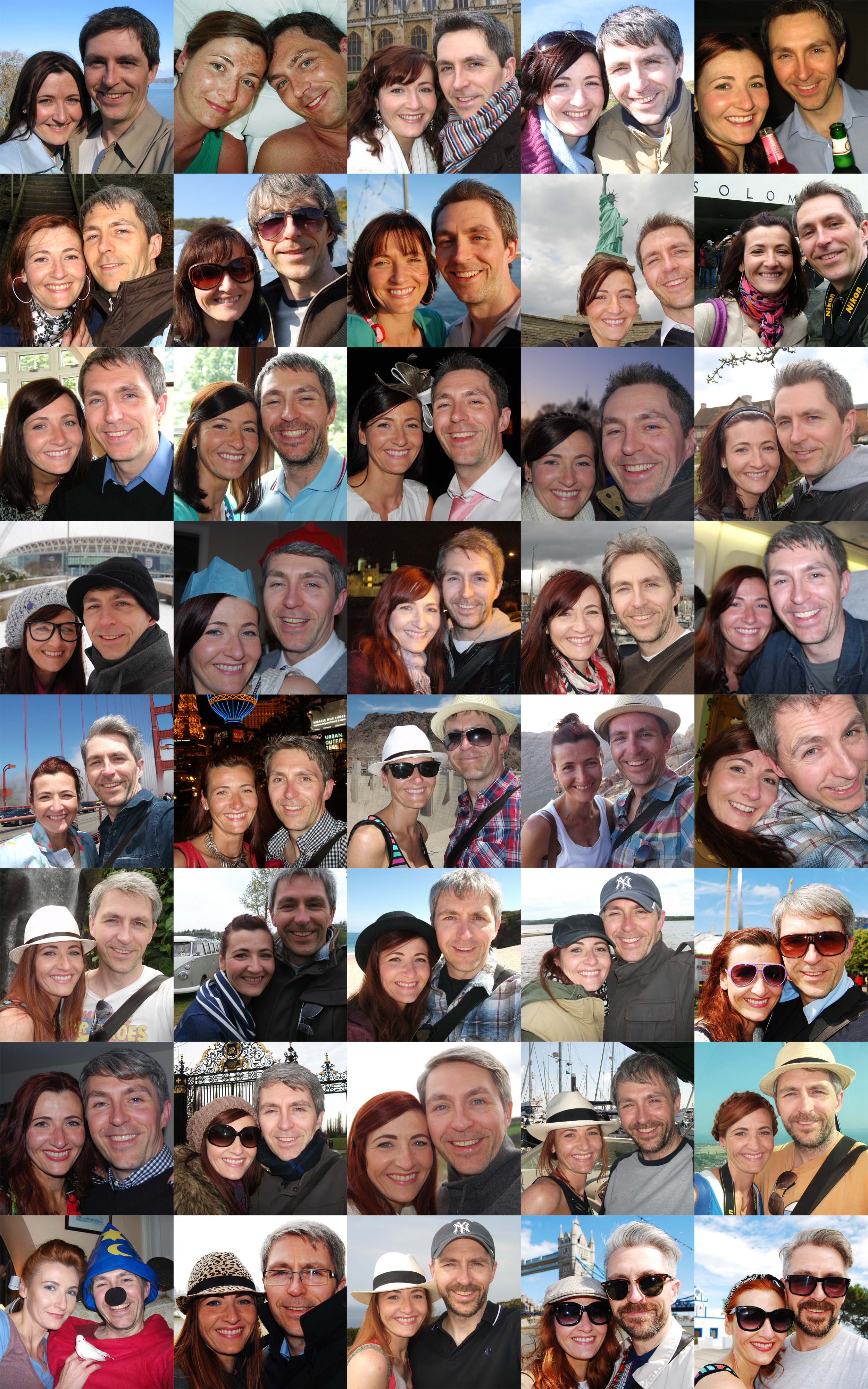 Despite my usual protestations towards the day that is known as Valentine’s Day, I thought I’d share with you the story of how my husband and I came to be married – in other words, the story of the proposal.

2016 is a leap year, so tradition dictates that on 29th February a woman is =ahem= “allowed” to propose to her man, otherwise known as a Leap Year Proposal. All utter nonsense, of course – you can propose to your other half on any day you choose – like I did.

I’d never planned to propose to my husband, nor had I ever thought in the early years about how he might propose to me, or if he ever would, for that matter. But sometimes circumstances force your hand, and you end up doing something that surprises you.

(I’ve included a composite photo of some of the selfies we’ve taken over the years whenever we go places. It’s relevant to the selfie we took on “the” day… Read on to find out why!)

We’d been together for a little over four years when I realised that we were going to be together forever – we hadn’t discussed marriage as such, and I wasn’t in any rush to get married because I’d been married before, albeit very briefly. But I actually wanted to take his surname more than get married, so I actually seriously considered changing my name to his.

Because I’d already had “the big wedding” and it didn’t work out for me, I had no yearning for a big day and a big dress all over again. I just knew we would be together, married or not, and we never really discussed marriage.

And it honestly never bothered me.

But around the same time I was thinking about changing my name (I’d kept my married name and for obvious reasons now felt uncomfortable with it), my sister told us she’d be coming over to England for Christmas with her family. She’s lived in Australia since I was little – she’s 14 years older than me – and I only used to see her every few years. Her announcing they were coming over was sometime in the autumn of that year 10 years ago, and they were due to arrive within a couple of months.

And that’s when it occurred to me. If we were ever to get married, we’d either have to wait a few years till the next time she and her family were over, or we’d get married in the next year or two and they probably wouldn’t be able to make it. Neither scenario appealed, so something else popped into my head.

We could get married that Christmas, when the whole family was together.

But what do you do when you have a great idea about why and when you should get married – which also needs to happen within a few months – but you’ve not actually had a proposal?

I wasn’t comfortable with the whole “suggesting” that he proposed to me – we were just weren’t that sort of couple. We didn’t “do” Valentine’s Day, or celebrate anniversaries of when we got together, or anything else that we felt that we were supposed to do. And that included me dropping massive hints that I wanted him to propose – forcing his hand, in other words. Being the sort of laid-back person he was, I knew he wouldn’t get the hint even if I dropped them, and then if I knew the proposal was coming I also knew it’d kill any sense of romance or surprise for me.

It just wasn’t the way I wanted it to happen, if it was going to happen at all. I knew that I had only one option – and that was to propose myself.

Luckily, 10 years ago was still before social media really got going. It was a time before we’d all watched proposals that had gone viral on YouTube, so there really wasn’t a precedent for me in terms of how to propose, or where, or what with. No pressure to do it in some spectacular way that would be recorded on the internet forevermore.

The only thing I did was to ring my sister and ask her one question.

“Tell me – what do you think of a woman asking a man to marry her?”

Her answer came after a short silence: In a squeaky and ever-so-slightly-excited voice she said, “I think it’s a reeeeeeeally good idea… Any reason why?!”

And somehow I got out of answering, knowing full well that she knew what I was talking about.

I basically decided that we had to get married at Christmas time, when my sister and her family – and all the rest of our family – would be altogether. My sister had said that she wanted to revive a family tradition from when I was small: Go up to London around Christmas time to see the lights on Regent Street, pop into Hamleys, walk past the Ritz Hotel and go look at all the window displays of all the major department stores.

My idea was to incorporate the two. We’re all going up to London, we’ll just get married while we’re up there. His family all live in London anyway so they wouldn’t have to travel far. It was the perfect plan – I just had to propose.

It was the end of November, and we lived (still do) in Devon in the South West of England, and one of our favourite places to go has always been a small, picturesque fishing village on the south coast called Beer. I suggested we went there at the weekend and go to the local pub afterwards for a beer (I’m aware it was a beer in Beer) and a pub lunch. It was going to be cold but a nice day, so a walk along the beach would do us good and get some fresh sea air into our lungs.

So for any woman who is thinking of asking her other half to marry her, the question is this: What do you do instead of getting down on one knee and opening up a box with a ring inside? Do you get a ring? Do you get down on one knee? I wasn’t comfortable with doing either of these things (and knew he wouldn’t be either), so I decided on getting a totally inexpensive bracelet – like a friendship bracelet. I saw it as the equivalent of proposing with a ring pull from a can, but maybe a little classier.

So we went for our walk, he none the wiser, me with a box containing a friendship bracelet in my pocket and getting nervous. It was absolutely freezing, but at least it was dry and bright like it had been predicted, and we walked to the end of the stone jetty that we always go to and look out to sea from.

I had been thinking about what to say, of course. I didn’t want any sort of cheesy speech, just a direct question. Or rather, it was more of a statement. It went something like this:

Me: “I’ve been thinking about what I want for Christmas.”

Him: “Oh yeah? What’s that then” (He starts to look a little worried.)

Me: ” You know the family will all be together in London at Christmas?”

(He starts to smile, thankfully.)

At this point the relief on his face was huge – he was laughing and simply said “Yes, of course I’ll marry you”

– my relief was so enormous that I burst into tears, right there on the jetty, looking out to sea. I’d forgotten about the bracelet in my pocket, so I messed that up, and I’d not planned to cry either.

It turns out he’d thought I was going to ask for a baby for Christmas (how he thought a baby was going to materialise within a few weeks I have absolutely no idea), which explained why he’d initially look so worried when I said I knew what I wanted for Christmas. Bless him. 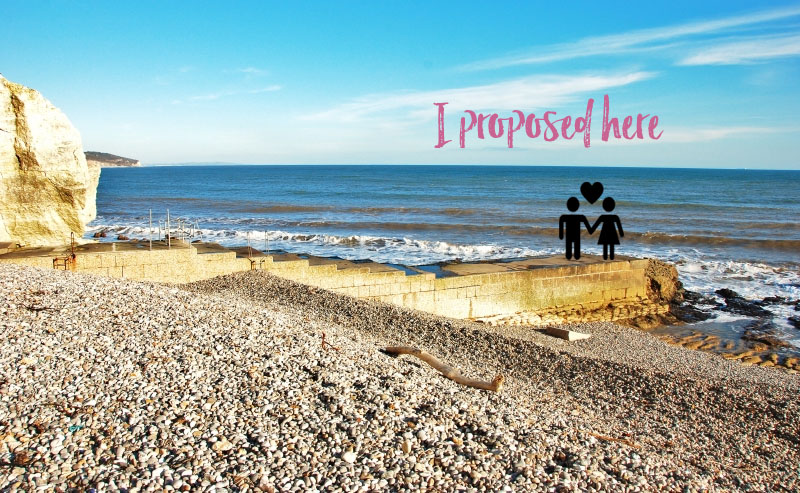 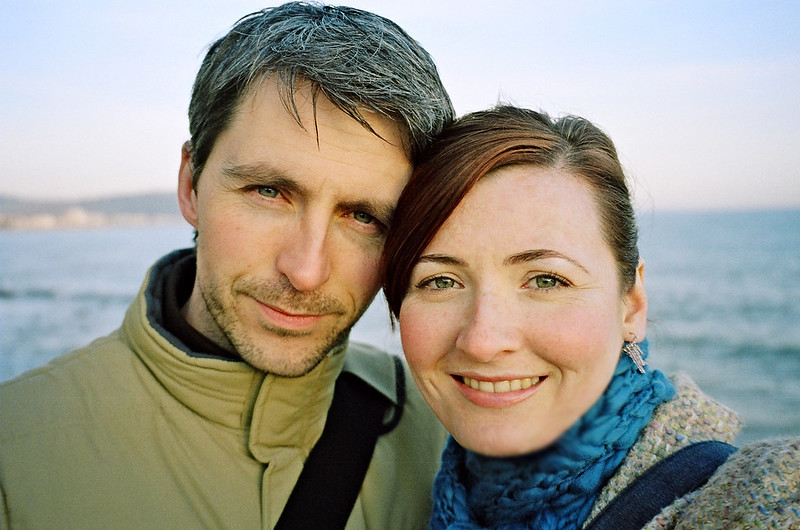 Above: The selfie we took on the jetty after the proposal, once I’d finally stopped crying.

In the minutes leading up to me asking I honestly thought he was going to say no. I’d always had a feeling he was slightly anti-marriage; as I said we’d never really discussed it and I of course had been married before, so I thought I’d perhaps given the impression that I didn’t want to marry again.

But thankfully he said yes, and couldn’t have been happier that I’d asked. He knew it made perfect sense that we get married while everyone was altogether. We both knew it was probably going to be the last time for quite a while, and as it turns out it really was the last time every single member of the family was together. My nieces and nephews grew up fast and of course they start doing their own thing and living their own lives.

So once we booked the earliest date we could get for the wedding at Chelsea Town Hall on the King’s Road – the area where we met, worked together and hung out (our “stomping ground”, in other words) – we had about six weeks to plan and organise a small wedding for our closest friends and family.

And it couldn’t have been more perfect.

Just over a decade later (we celebrated our 10th anniversary just after New Year this year), my proposal story is a slightly unusual one, and I don’t know another couple where she proposed to him. But an unconventional proposal led to the perfect wedding for us – I would have been devastated if my sister and her family had missed out, so I’m happy to have given up a great story of “how he proposed” in order to have the simple, stress-free and attended-by-all wedding that we had.

As I mentioned before sometimes your hand is forced, and I’m all the more glad for it. It still makes a great story, it just doesn’t go the way most people expect.

So ladies – if you’re wondering whether you should plan a proposal, whether it be 29th February or any other day, just do it if it feels right for you. The reasons that you do it are far more important than “having a great story” to tell in the future.

Remember: You get married for yourselves and your own happiness, not for other people.

Happy Valentine’s Day, whether you believe in it, or – like us – you don’t. In which case: Happy Sunday. We’ll be watching Deadpool at the cinema – now that’s what you call romantic!

(Note: What you will notice about the “proposal day” picture that’s different from the lead picture – a composite of all the selfies that we’ve always taken wherever we go from the last 15 years – is that this was the one picture we took with us standing the other way round. Normally I’m always on the left – he takes the picture as he has the longest arms. Why that happened that day I have no idea; I just think it’s interesting that it was the one day we subconsciously made it different.)

Did you – or anyone you know – propose to your other half? And if so did you do it on 29th February? Do tell your proposal stories (any type!) in the comments or tweet me @notlamb, I’d love to hear them!