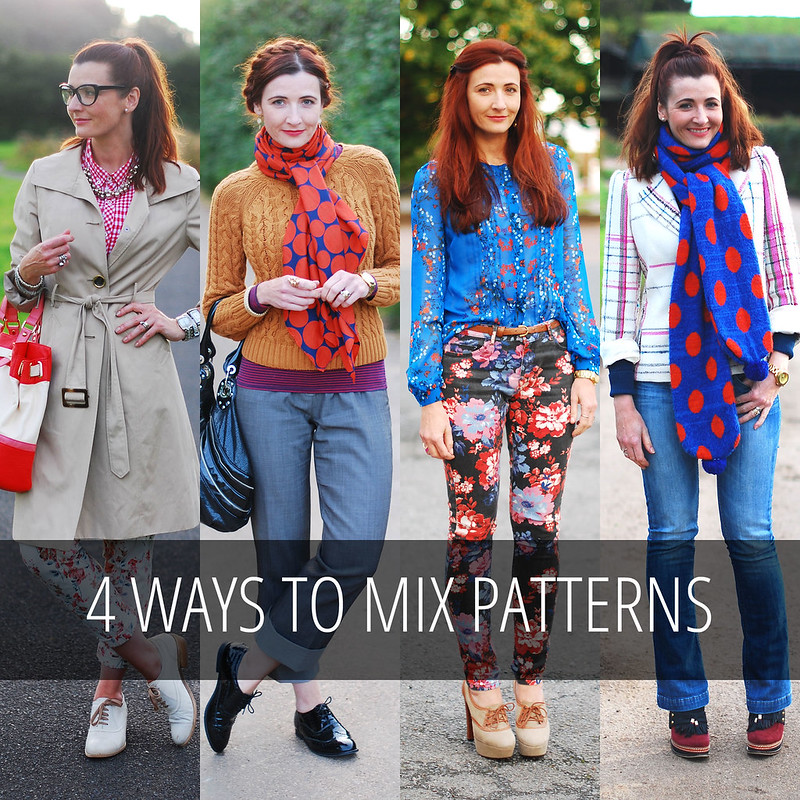 I’ve been meaning to do a post on pattern mixing for a while, and as this year I’d like to try and do a “4 Ways To Wear” post a month, I thought I’d combine the two and get the series kicked off before the month was over!

Now I don’t set out to mix patterns on purpose… it just kind of happens. My deciding-what-to-wear-in-the-morning routine goes like this:

1. What’s the weather doing
2. What are the day’s activities
3. What do I have that’s clean
4. Which one particular item do I fancy wearing, and
5. What else goes with the colour of that item…?

So when I’m at the choosing colours stage, I’m already limited by quite a large number of factors. For example… if I don’t have another plain item to go with that chosen item (not likely anyway considering my wardrobe), as long as the colours co-ordinate then I’ll put them together. Sometimes the result is extreme pattern mixing (when two patterns are right next to each other), and sometimes there are two patterns in the outfit, but not on top or next to each other. This outfit was created from needing to wear a coat or jacket and wanting to style up my vintage Lacroix I don’t wear very often. Due to the weather I needed a big scarf, and the bold polka dots echo the bold checks of the blazer. As the blazer has red and blue in the pattern like the scarf, to me they co-ordinate beautifully. It’s also an accessory that funks up a classic blazer. 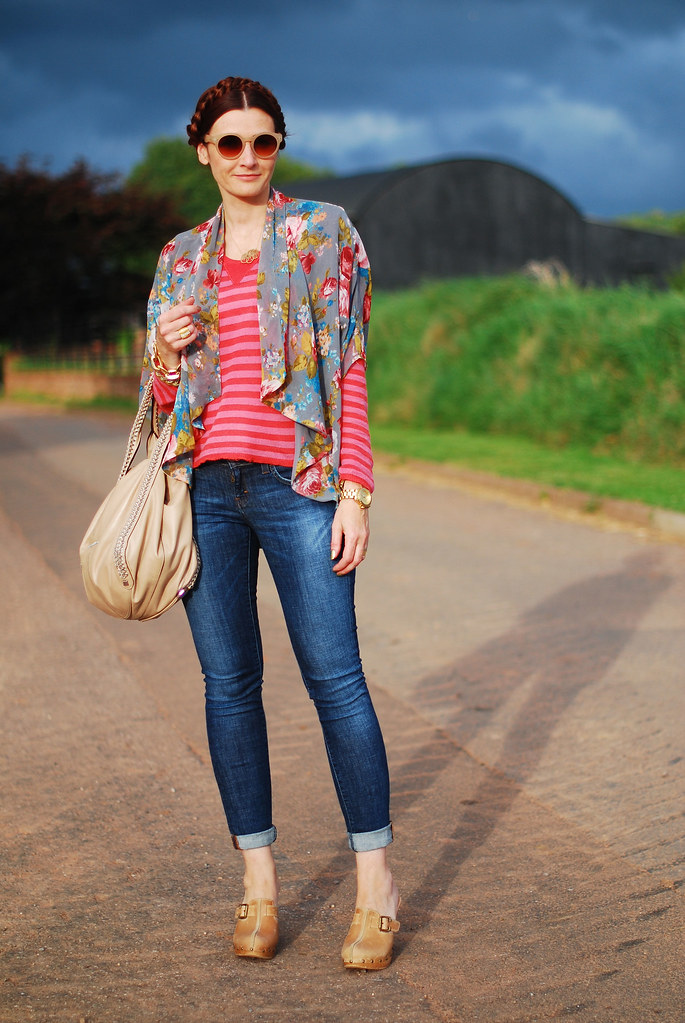 Another extreme pattern mixing example – the “classic” pattern mix of stripes and florals. You can’t go that wrong using stripes, and again the key is to pick out at least two colours that are present in both patterns. So here the two colours of the stripes are found amongst the florals, plus I liked how the soft folds of the jacket contrast with the flat stripes of the sweater. Of course I didn’t think any of that at the time, but looking at the outfit now I can see how it provides that nice contrast.

But if extreme pattern mixing is a bit too much for you, then I’d say try the subtle version, where one pattern is not an obvious pattern, or the two patterns are separated by another item of clothing: 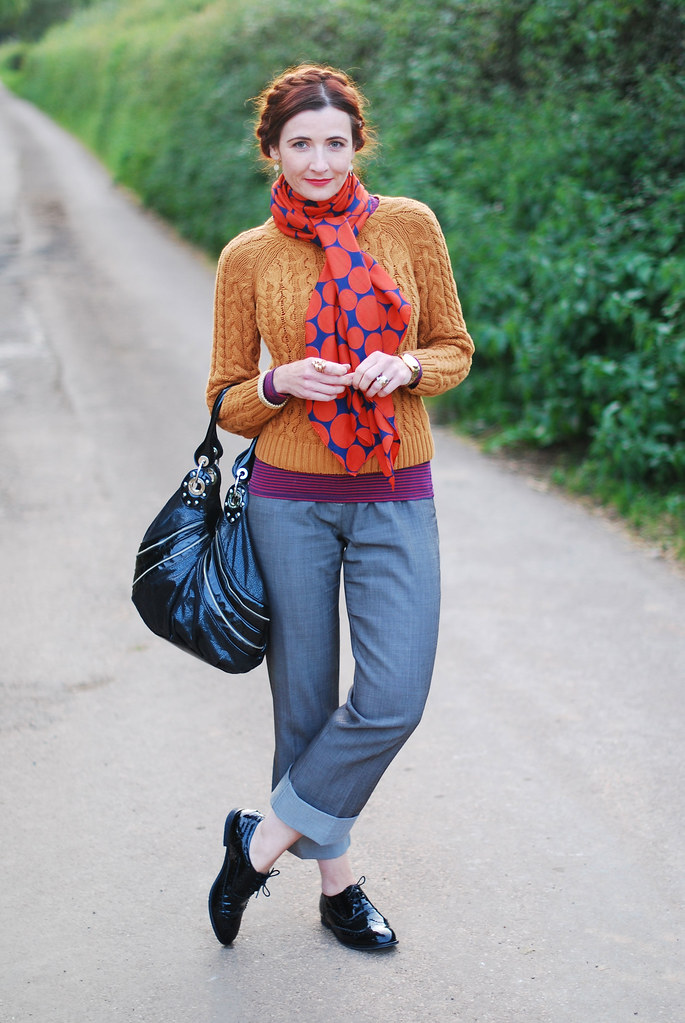 This outfit incorporates stripes and polka dots – but the stripes are very, very fine so from a distance the blue and red stripes make the top look purpley-pink. But the two pattern still follow the same “rule” (I use that term loosely): blue and red stripes with blue and orange polka dots. There’s also the texture of the cable-knit sweater to add to the mix, so although subtle, it’s still quite striking. 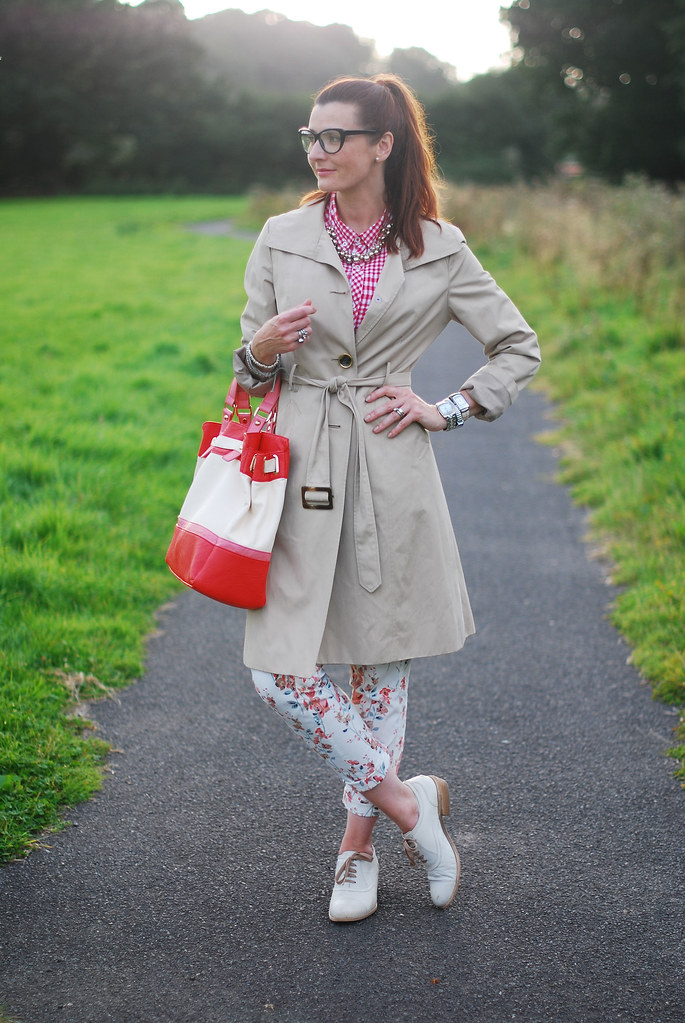 One of my favourite outfits of last year, this shows how you can either wear your mixed patterns right next to each other (no jacket), or break them up as shown here with a belted jacket or coat. Again – the red and white of the gingham is echoed in the florals… not exactly, but they are from the same warm palette which always works. To me personally this isn’t pattern mixing at all, but just colours that go together.

So if you’re wanting to break out the patterns more, I say just treat them as colours and make sure they co-ordinate, but not necessarily match.

And if you’re feeling brave? Get the colours right and mix them from head to toe! Not to everyone’s taste I know, but I guarantee you’ll sure feel bright… 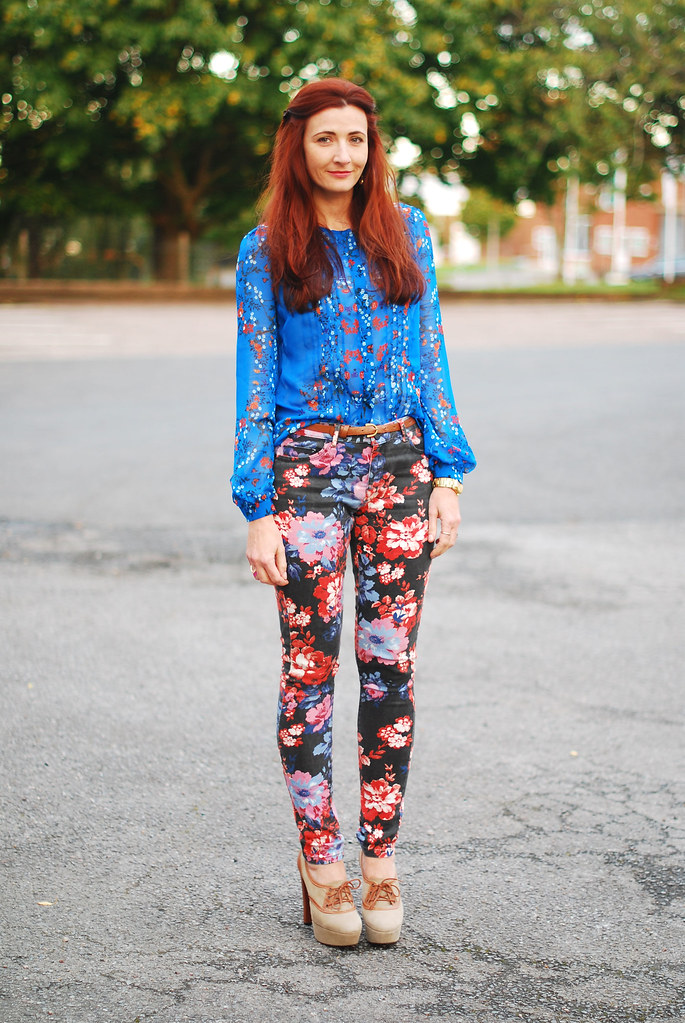