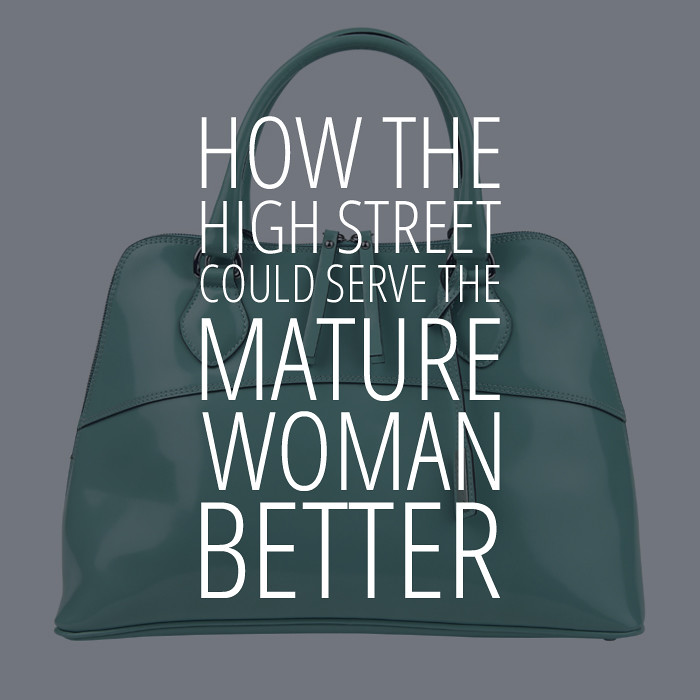 I was emailed a little while ago by a young lady writing a project about style for the older woman, and was asked a few things to give her my view on style and age. I was asked some really great questions, and when I went back and read what I emailed her, I thought I’d share it here.

She asked me how I felt about the current range of choices on the high street for mature women, and whether I’ve noticed an improvement in recent years due to campaigning from the likes of Mary Portas, etc. Did I feel there’s still a long way to go, and what are the best shops/worst offenders?

Personally, I think what is available in high street stores for mature women concerns not what they sell, but how they sell it. I think women of all ages only shop in places they feel comfortable in – Topshop is marketed towards younger girls, so the shop layout, outfits, music, etc. reflect that; likewise, places geared towards mature women have softer music, mannequins in safe outfits, and so on.

Take Topshop, Zara or New Look for example: I think that mature women could easily shop from about 50% of their ranges if you presented them in, say, the Mary Portas store. She presents an environment geared towards their age group.

As a general rule, if women aren’t comfortable in a store, they won’t even step inside, even though many, many clothes would be suitable for them.

Although shops like Mary Portas and even Marks & Spencer have done a lot to highlight the fact that older women also need clothes geared towards them, I still think there’s a gap in the market for an equivalent store selling more reasonable, on-trend clothes for older women.

I’ve been to the flagship Mary Portas store within House of Fraser, and although I liked quite a lot of the clothes, it just wasn’t adventurous enough for me (I don’t always want classic pieces). Plus, it was still somewhat rather out of my price bracket, even though I have a reasonable amount of disposable income as I don’t have children and my husband and I both work full time.

I would be very confident that I could easily shop for my 78-year-old mother, for example, in Zara, Next, New Look, Topshop… even ASOS. They’re not ALL selling mini skirts, cut away tops or neon sportswear. So I continue to shop in these places even though I do feel “old enough to be everyone’s mother” – that doesn’t bother me – but it won’t help women who want guidance and are stuck in a rut. They could get fabulous clothes from these high street stores but just won’t/can’t shop there.

I was also asked, in terms of fashion advertising/campaigns/magazines, whether I thought there is a gap in the market for mature women. Some magazines are making an effort (Bazaar/Madonna) and adverts (Marks & Spencer/Twiggy); did I think that there needs to be more of this, and if so, why?

I would love to see many more older women in marketing campaigns and magazines, and I don’t just mean the still-working 90s supers who are now in their forties like Linda Evangelista, Yasmin Le Bon or Cecelia Chancellor (whom Mary Portas used in her first campaign). They are still supermodels, after all.

I find magazines for older women far too mumsy (ugh, that word!) – I think it would be a great idea [and this is hardly a surprise to anyone reading this post] to use style bloggers because they love fashion and style so they’re used to dressing up, they’re comfortable in front of the camera and are usually willing to try more daring outfits and experiment more.

This is the sort of inspiration the ‘woman on the street’ needs: Other non-supermodel women. I truly believe it could work because of the popularity of fashion blogs and street-style photography. If we all love the style of fellow bloggers – and very few of us look like supermodels – who’s to say other women (who have never seen a style blog before) wouldn’t react in the same positive way?

High street (as opposed to couture) is what we wear in real-life – what we are going to buy and actually wear so this is what needs a fresh approach. I’d like to see one of the big retailers do something much more daring where an advertising campaign is concerned; New Look touched on it a little last year with their TV advert that showed ordinary girls of all shapes and sizes… age needs to be addressed next.

Think about how much an advertising campaign showing fabulous women of all ages not dressed like the archetypal mother of the bride would get people talking…!

LET ME KNOW YOUR THOUGHTS IN THE COMMENTS!