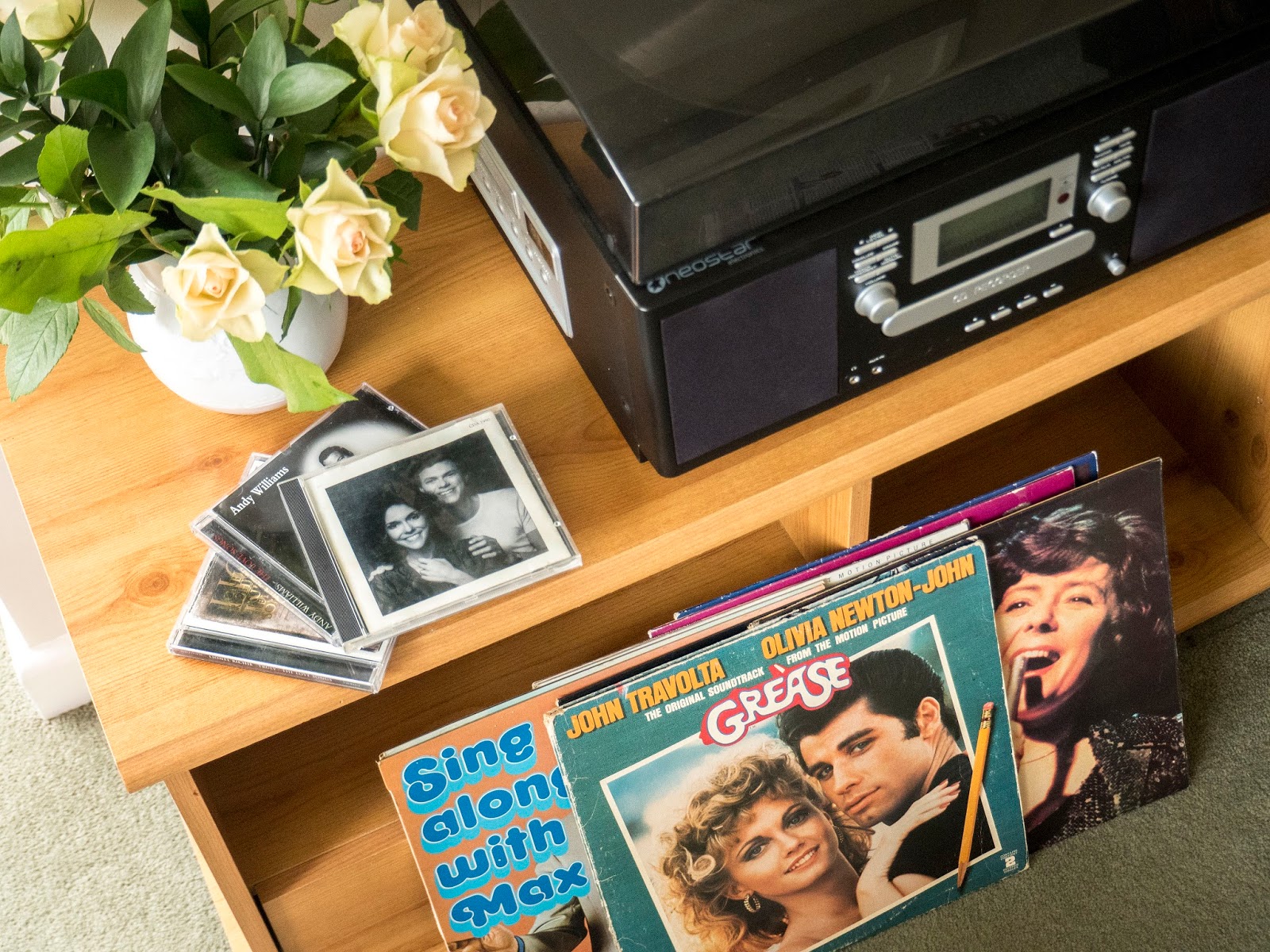 This week I was really saddened to hear about the death of Glen Campbell, one of my favourite singers from my childhood – and whom I still love now – and it got me thinking about guilty pleasures.

‘Rhinestone Cowboy’ was one of those songs that I secretly loved all through my teens and twenties. A song that you sing at the top of your lungs in the car, safe in the knowledge that no one can hear how badly you’re singing it. And this week it also occurred to me that secretly was the operative word. When I was at school I would NEVER have admitted to my friends that I liked Glen Campbell. Or Doris Day. Or Andy Williams. Or The Carpenters. Or Neil Diamond.

Or anyone else that was considered “not cool” in the 80s or 90s.

But I have always loved all those artists, and I guess in the past they would have been what I would have described as my “guilty pleasures”.

But a few years back, probably around the time I lost my inhibitions about all sorts of things (like what I chose to wear, asking what words I didn’t know meant, asking questions at conferences – otherwise known as “getting older”), I also started to really, truly embrace all the things I liked.

No matter how “uncool” they were supposed to be.

I had a bit of an epiphany where liking uncool stuff was concerned a few years ago whilst watching The One Show (for non-Brits: The One Show is a daily studio-based magazine programme on after the early evening news covering all sorts of topics from the very serious to the very fluffy).

They had a daily series for one week covering unusual hobbies that different people had, from (if memory serves) breeding rats to spotting and photographing electricity pylons.

I was watching it with Keith, and I knew instantly what he was thinking – it was the same as me, WHY would anyone want to do such a strange thing? – but as each interview progressed, it was clear what all these people had in common: An absolute passion for their hobby, and it brought them all true happiness. I seem to remember how well they were portrayed in the clips: No one was treated with ridicule. No one was presented as being a nutcase, or weird. Just people with an unusual (to most other people) hobby that brought utter joy into their lives.

At the end of the piece about electricity pylons, I turned to Keith and said, You know what, I was ready to say to you about this being such a weird thing to do, but did you see how much that couple were enjoying life, travelling the country and looking for pylons to photograph?

And he turned to me and said, I was thinking EXACTLY the same thing. Good for them for doing something they love, no matter what anyone else thinks. Who cares if WE think it’s unusual?

We then looked forward to the remaining parts of the series each day, desperate to see what other unusual things people got up to and loved doing. We learnt that these people loved what they loved, and without shame.

Better to have a weird and wonderful passion in life than none at all.

This week I was reminded of the joy that just liking (or rather, being really really CRAZY about) something can bring when I saw this video on Twitter:

Literally me every time I watch The Lizzie McGuire Movie pic.twitter.com/E72LKVgoQn

Just HOW happy was that lovely guy watching The Lizzie McGuire Movie? The joy that he exuded was infectious… it made me want to get my Footloose album out and start Kevin Baconing round the room. Or watch The Breakfast Club and dance like Molly Ringwald in the library scene (classic 80s dancing in both instances).

His life looked practically complete right there – he felt no shame at all in liking (loving!) Lizzie McGuire. 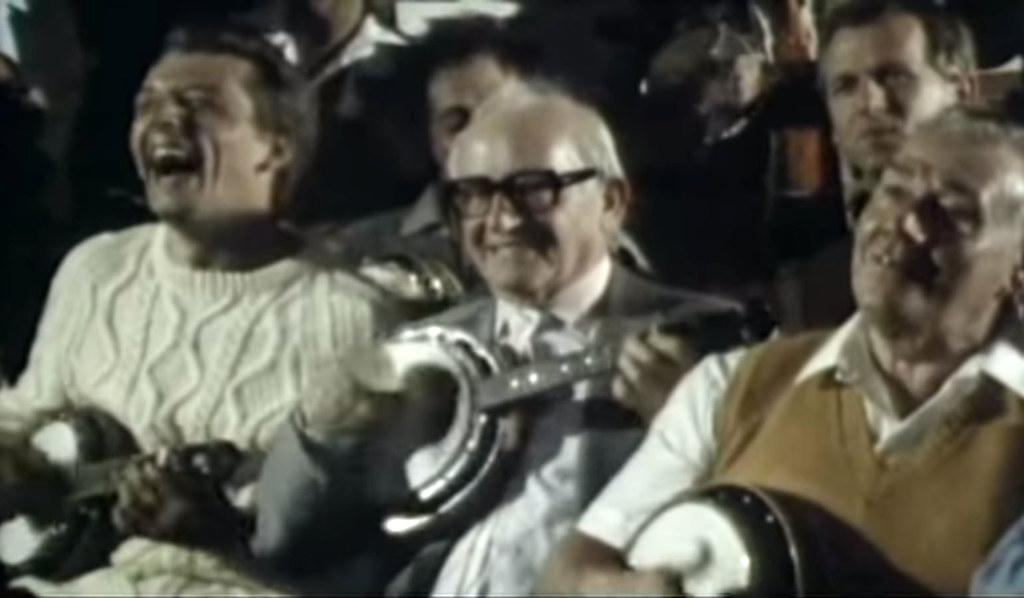 Similar thing: The still above is a clip from one of Russell Brand’s Ponderland episodes (that link will start the video at the relevant moment) showing archive footage of ukulele players at a George Formby convention. Whether or not you like Mr Brand or not aside, he never treats anyone with contempt – no matter how they come across or what they do or say.

And of the ukulele players he says this:

Look at this bloke here in the woolly jumper, he’s my favourite: Look, I’ve never been that happy in my whole life, look at that! You’ll never be as happy as that man.

Look at the joy on his face… he’s having the time of his bloody life, playing his ukulele and watching George Formby. Who is ANYONE to take that away from him by deeming him uncool or weird?

The best quote in the world ever about guilty pleasures

I can’t write a post about guilty pleasures without quoting Foo Fighters frontman Dave Grohl – he said one of the best things ever about liking stuff. (And this is a man who was in ultimate 90s band Nirvana and is deemed to be a very cool rock star indeed.)

(BAD LANGUAGE WARNING: I don’t particularly warm to swearing on blogs, but there are so many expletives in this quote it would lose its impact if I put asterisks ** in everywhere…)

I don’t believe in guilty pleasures. If you fucking like something, like it. That’s what’s wrong with our generation: that residual punk rock guilt, like, “You’re not supposed to like that. That’s not fucking cool.” Don’t fucking think it’s not cool to like Britney Spears’ “Toxic.” It is cool to like Britney Spears’ “Toxic”! Why the fuck not? Fuck you! That’s who I am, goddamn it! That whole guilty pleasure thing is full of fucking shit.

There you go – Dave Grohl says we should like whatever we want, and not feel guilty about it. Or ashamed about liking it.

From music to movies to clothes to hobbies, just OWN it. I’ll be listening to Glen Campbell and Neil Diamond, having a crush on Bill Hader, collecting glass paperweights and dancing like Molly Ringwald (knees permitting) till the day I die.

WHAT STUFF DO YOU ABSOLUTE LOVE – NO MATTER HOW UNCOOL IT’S SUPPOSED TO BE?? MUSIC, MOVIES, HOBBIES… PLEEEEEASE SHARE THEM WITH US IN THE COMMENTS (OR TWEET ME @NOTLAMB)!