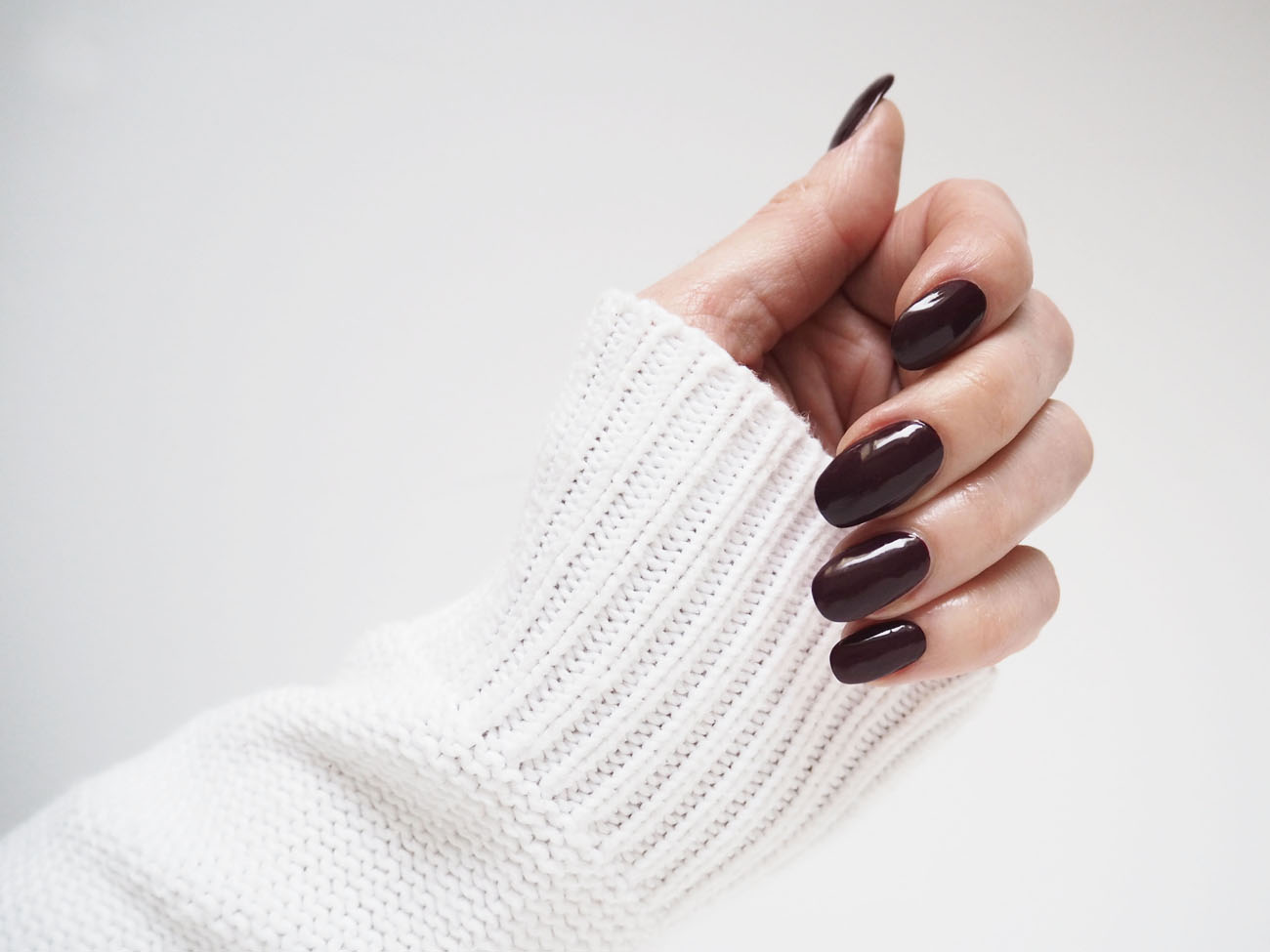 Whilst giving myself a manicure the other week, I was thinking how much of a pain my nails were being that length.

I was constantly finding it hard to pick things up (long nails don’t make this easier, it makes it harder).

I was getting gloops of moisturiser under them when applying it to my face. Same with food when cooking.

Disclosure: I was gifted this nail polish by Leighton Denny but was not compensated for writing this post or asked to write it (click here for my full disclosure). All content is original and opinions are my own and 100% honest.

I had problems putting fitted sheets onto the mattress, and I couldn’t press the button-thing to pop open the boot of the car (I had to ask my husband to do it as my nails were just too long).

Even flushing the toilet (the push-button type) had to be done with my knuckle FFS.

It suddenly occurred to me: WHY was I putting up with this? Why didn’t I just cut them shorter?

The reason I didn’t was that the thought of having shorter nails horrified me: I’ve had long, pointed (almond-shaped) nails for about two years after I decided that I just wanted long nails, for no other reason than “because I wanted them”. I was used to having super long talons waggling around at the end of my fingertips. However, the danger was that I’d got myself into a rut, and I couldn’t cut them shorter because… Well, for no better reason than “Well I can’t”.

As youthful 40-somethings we’re often very aware of trends in clothes and pick and choose those that work best for us. But how often do we consider our make-up? Our nails? Our eyebrow shape?

It made me think: How often do we get ourselves into a rut when it comes to our beauty look and routine? As much more youthful 40-somethings than our mothers and grandmothers were at the same age, we’re often very aware of trends in clothes and pick and choose those that work best for us.

But how often do we consider our nails? The makeup we wear (and use)? The way we do our eyebrows? Our skin care routine? 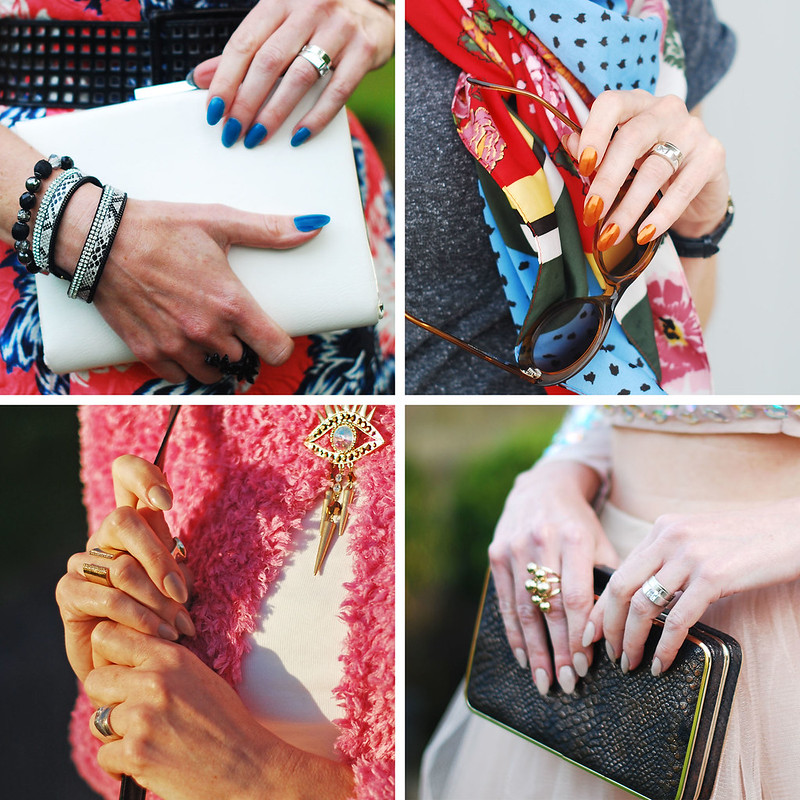 (Above: The “old” nails. I know to a lot of you it may seem like there’s no difference, but to me it was huge…!)

The day I thought this, I literally took one look at my almond-shaped nails and decided it was time for a change. Right there and then I reshaped them entirely, from the long points to a shorter, squarer/more oval shape (I think it’s called “squoval”). It’s a bit lame to say I was initially in shock (it’s only my flippin’ nails, after all), but they were really short compared to what I’d been used to.

I felt like they were short and stumpy and my hands didn’t look as elegant as before (here’s where you have my permission to get your tiny violin out for my First World Problem).

Teens and 20-somethings, having been brought up on a diet of youtube tutorials, are much savvier when it comes to experimenting. It’s very easy to get to 40 and realise you’ve had the same basic hairstyle for 15-20 years.

But after only about a day I’d got used to them – and everyday tasks were suddenly soooo much easier. I could pick up coins. I could do up fiddly buttons. I could get the boot of the car open all by myself. And to be fair I rather liked the new shape: One lick of classy red polish later (what better way to celebrate than with bright red polish?) and I was flashing them all over the place. One beauty rut cleverly avoided.

(I’ve now moved on from the red and now painted them a delicious, perfect-for-autumn dark reddish brown, ‘Rebellious Heart’ by Leighton Denny).

Don’t get stuck in a beauty rut

My point is – don’t get stuck in a beauty rut. I think teens and 20-somethings, having been brought up on a diet of YouTube tutorials, are much savvier when it comes to experimenting with make-up, nail polish and hairstyles. It’s very easy to get to 40 and realise you’ve had the same basic hairstyle for 15-20 years.

So have fun with your beauty look. Watch some make-up tutorials, change your nail shape, get a funky new haircut and/or colour. Check out my Pinterest boards for hairstyles, make-up and nails inspiration. 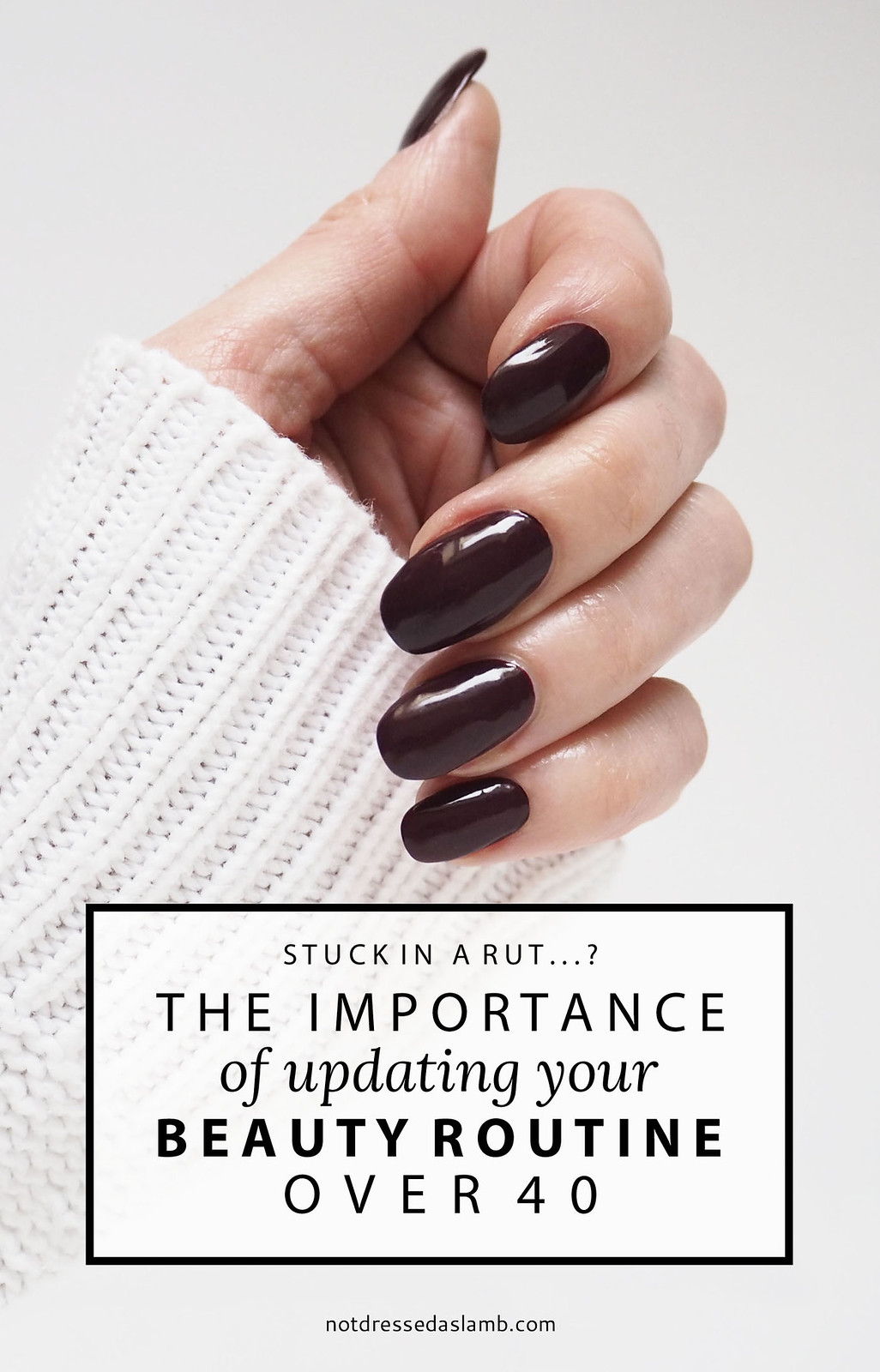 The two things I have on my radar next to change: My eyebrows, my teeth(!) and maybe a beauty treatment here or there. Maybe not what you were expecting, but then I didn’t expect to be giving up my long nails a few weeks ago. Stay tuned for updates.

A change is as good as a rest, as they say…!

WHAT HAVE YOU CHANGED ABOUT YOUR BEAUTY LOOK RECENTLY? OR HAVE YOU BEEN WANTING TO CHANGE SOMETHING, BUT NOT HAD THE GUTS TO DO IT? COMMENT BELOW!