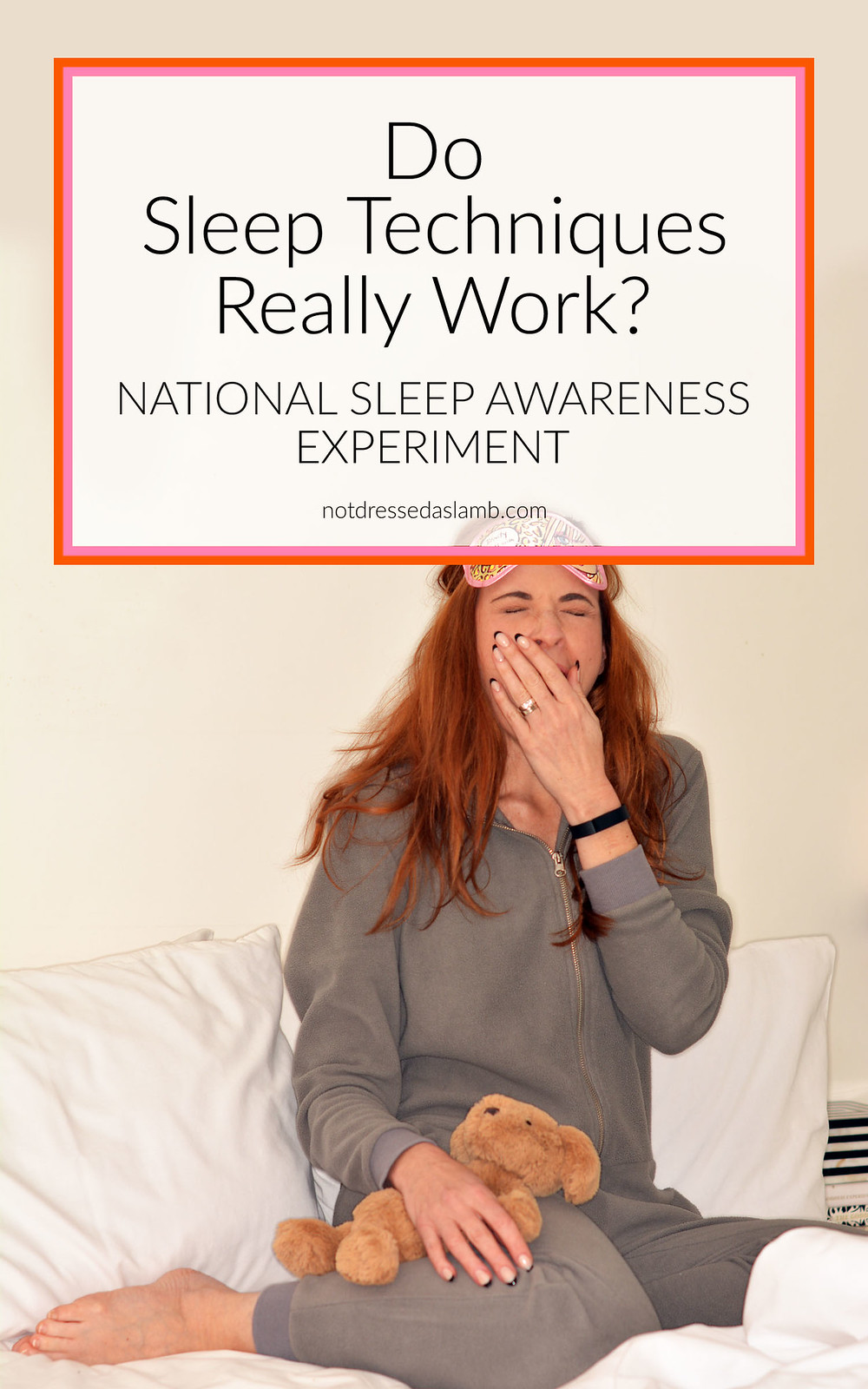 National Sleep Awareness Week was 2nd to 9th March – and the perfect time to find out for me personally whether sleep techniques really work.

I never used to have too many problems falling asleep – usually I’m out like a light – but in the last few months I’ve developed tinnitus and it’s kept me awake in bed from between half an hour to over two hours on occasion. I needed a solution fast, and as I haven’t been good at going to bed at a reasonable time for several years now (since July 2011 actually, which was when I started my blog #youdothemath), drastic action was required.

By chance I was asked to take part in Hillarys Week of Sleep as part of National Sleep Awareness Week – as you can probably imagine the request couldn’t have come at a better time for me. Hillarys is supporting the UNESCO International Year of Light and wanted bloggers to monitor their sleep for seven nights and then report back on what kept them awake and what helped them get to sleep.

Fitbit activity tracker
I was kindly gifted a Fitbit Flex activity tracker – one of those bracelets that not only magically monitors your sleep but also tells you how many steps you’ve taken that day as well as a heap of other stuff. I’d been thinking about getting one of these for ages and although they’re not cheap (upwards of £70) – what they can do to help you with your sleep and fitness is nothing short of phenomenal. I’ll do a separate post about everything it can do (and how it helped me with so much more than just sleep), but somehow it gives you a complete report each morning about the exact times you were awake, asleep and restless.

The Fitbit is an incredible piece of equipment.

Sleep techniques and my expectations
Hillarys passed on details of a number of sleep techniques, and the ones I wanted to try – plus a few others I’d read about elsewhere on the internet – were:

Before the start I knew my biggest challenge was getting to bed earlier. The second challenge was not allowing the tinnitus to keep me awake using the techniques I’d been given at the hospital (using the sounds of nature to concentrate on). The third challenge was waking up and getting up at the same time every day so that I’d become properly tired in the evening and find falling asleep easier.

Sleep summary:
Unfortunately I forgot to set my Fitbit to sleep mode (despite my saying to myself all evening “don’t forget to set the sleep mode before bed”), so I can’t tell what my exact sleep patterns were. Not a great start! Decided to do an extra day’s monitoring at the end of the week to make up for it.

I closed down my PC and turned off my phone an hour before bed and used a night time sounds app set for 30 minutes to distract me from the tinnitus. I did wake up a couple of times (not sure why) soon after going to sleep but drifted straight back off. I managed to get up at 7:00am before my main alarm went off (a small beeping alarm clock); having the radio come on 10 minutes before helped.

This is how it appears on the desktop Fitbit version:

Sleep summary:
I remember waking up a few times, plus I was much more awake when the husband’s alarm went off at 6:00am. Normally I’m dead to the world when it goes off, so maybe I’d had a more refreshing sleep than I’m used to.

Sleep summary:
Last night I ate half a banana before bed as I read it increases melatonin levels. I thought I’d woken up a few times but my Fitbit sleep summary says it was only a couple of times, and very briefly. Fell asleep in 10 minutes which is great – I thought it took much longer.

Sleep summary:
I went for a run in the afternoon rather than the evening to try the exercising earlier thing. Though I did do an hour’s full-on cardio session in the evening as well and killed it so my energy levels were way up there. I also tried wearing an eye mask, but it was far too tight so I think it lasted all of about 30 seconds. To be honest I had no trouble getting to sleep (probably because of all the exercise) but my sleep tracker shows I woke up several times – and was awake for several minutes at about 1:30am – but I don’t remember.

Sleep summary:
Finally remembered to block out the light from the street lights with an extra blanket but it didn’t make much difference to the amount of light in the room. We’d need some serious blackout blinds to completely get rid of all the light. What we didn’t realise before by going to bed regularly at 12:30am or after was that the street lights are switched off after a certain time, so before the room was much darker. Going to bed earlier meant a much lighter room with the street lights on.

Took a little time to get to sleep because some neighbours decided to keep their car running outside our house and have a normal-volume conversation (we live in the town centre and our front door is right on the pavement). I did start to think I was going to have problems getting to sleep but must have nodded off eventually.

Sleep summary:
I remembered to block out the light with a different, thicker blanket last night. I finally made it… 100% sleep efficiency! And not because I’m so exhausted I’m like a zombie, but because maybe – just maybe – I’ve got this sleep thing sorted. The darker window did help somewhat. Weirdly I was very sleepy during the day today, not sure why. I also decided I wouldn’t use the beeping alarm clock anymore as I’m properly awake by the time I need to get up.

Sleep summary:
Had my first “lie-in” – till 8am! A treat as it was Sunday. I’ve noticed a pattern in my falling asleep time – it seems to be roughly 10 minutes unless something external’s keeping me awake. Now that I’m doing pretty much all the techniques I’d set out to do I’ve noticed a big difference. The tinnitus is bothering me less because I’m concentrating on listening to the soothing nature sounds coming through my pillow speaker (which, by the way, I can’t hear through my pillow so have it next to it instead). I don’t feel like a zombie in the morning either and am getting more done early on.

Sleep summary:
I monitored this as an extra day because I forgot to set my Fitbit on day one. Everything was pretty much the same as last night – I can definitely feel a good routine coming on and my sleep efficiency (so the FitBit says) is always about 99%.

For someone who used to get on average between four and six (maximum) hours of sleep a night, this was a revelation. I’m the sort of person who’s very competitive so the thought that “someone” was monitoring me made me get into bed earlier both out of embarrassment and out of a need to win… totally irrational as this was not a competition in any way shape or form but that was the effect the Fitbit had on me.

So I can’t tell for sure what techniques worked for sure (half a banana to increase melatonin levels? who knows), but in terms of winding down, turning off white light emitting devices and making the room as dark as possible it all helped me get to sleep in record time compared to the hours lying there awake that had been happening more frequently in recent months.

I’ll be continuing with the Fitbit long after sleep week, no question. I liked the vibration alarm on your wrist to wake me and I liked trying to reach 10,000 steps and it telling me with a little celebratory buzz when I’d done it. I also liked having the night time sounds I’d chosen as my soothing nature sounds to take away the deafening shrill of my tinnitus. I think the key to it all, more than anything, was going to bed and getting up at the same time every day – by 11pm my body was crying out “bed pleeeeeease” and I was so determined to do better than the night before that I forgot my previous desperation to “just do another 20 minutes work”.

I’m really, really hoping this will kick my late-to-bed habits once and for all. Fingers crossed.

Do YOU have problems getting to sleep? Do you have restless nights, trouble staying asleep or trouble getting up in the morning (like I did)? Let me know what techniques you use for a good night’s sleep, plus don’t forget to look out for a part two of this post where I’ll discuss the health benefits this has given me…!