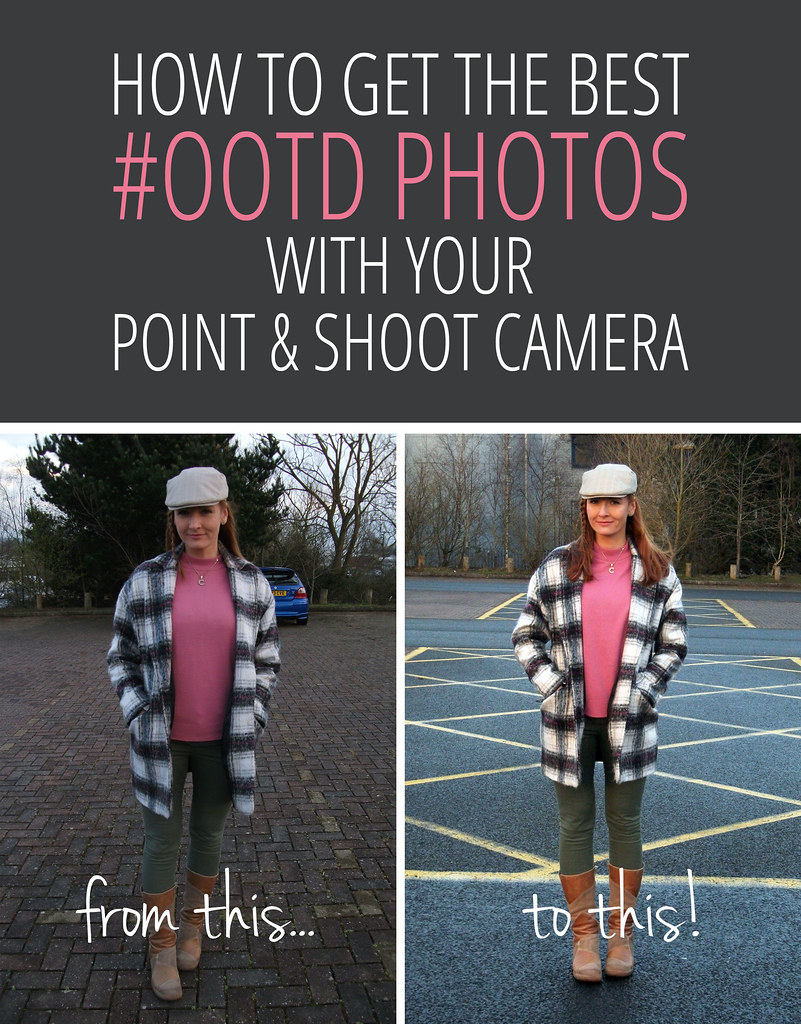 If you’re a blogger who takes outfit photos and doesn’t happen to own a DSLR but does have a point-and-shoot camera (also known as a compact camera), chances are you may not be happy with your pictures.

I say this only because I hear so many bloggers say their photographs would be better if only they had “a better camera”. Whilst a DSLR with a fast lens (one that reacts more sensitively, or faster, to light) will certainly give you fantastic quality photos, it is possible to get really good results with a point-and-shoot. You may have to think a little more about lighting, time of day, location, etc., but if you think it’s all the camera’s fault, think again. There are four easy steps that can make the world of difference to your outfit photos, and here I’ll explain what they are (in the easiest terms I can think of – I always try to avoid too much jargon in these posts).

Ever heard the expression “a bad workman blames his tools”? It’s true in photography – to some extent. Something I notice a lot in fashion and style blogs are photos that I can tell were taken with a point-and-shoot, but a few basic rules weren’t adhered to, and the results could be so much better with the same camera (tools).

So – here is my “before” photo, taken with my Fujifilm FinePix AV130: There are lots of things wrong with this picture:

However, don’t fret – most of these problems can be rectified. Here’s how!

1. Stop using the wide angle setting – get the photographer to stand back and zoom in

This is the most common mistake I see in outfit shots. The camera is switched on, the shutter held down to focus, and the photo is taken. When a point-and-shoot is switched off, the lens is tucked away in the camera body. When you switch it on, the lens is (usually) automatically set at the wide angle setting. That means more of the landscape will fit into the frame, so distortion occurs because the camera has to somehow squeeze loads into the picture. This means that anything near the camera will seem larger, and anything further away will seem smaller by comparison.

That’s why I have a big head, bulbous body and small legs in the “before” picture.

The solution to getting a photo of your body looking in proportion is easy – get the photographer to stand further back and ZOOM IN, as I’ve done in this picture: 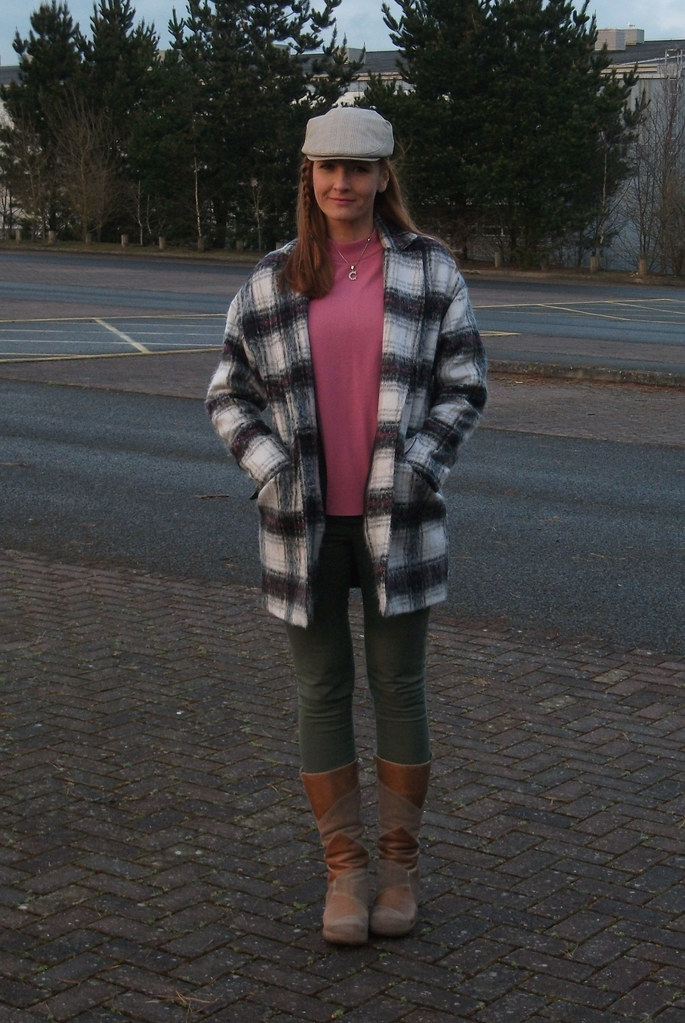 So it has improved – my body is much more in proportion. The ideal focal length – which is how much you’re zooming in – is 50mm. That’s because it’s the view most like the one seen by the human eye, so it looks the least distorted. My camera’s focal length goes from 32-96mm, so I need to zoom in about half way between the widest and the “zoomiest.”

However, there is a disadvantage to zooming in. To explain simply, the further you zoom in, the smaller the hole in the lens that lets in the light (known as the aperture) becomes. The smaller the hole, the worse the quality of your photos because the camera will compensate for the lack of light coming in and make it grainier. (You know when you see pictures of celebrities on yachts taken by the paps from a gazillion miles away? That’s why they’re always so grainy, because they’re using huge lenses that zoom right in, and that affects the quality of the image.) Zoom in enough to stop the distortion, but not so much that you’re forcing a poorer quality photo, especially when you’re lacking a good light source as above. How to know? Trail and error is the best judge.

Next to sort out: the lighting is still a problem. My face is pretty dark and the photo looks flat all over.

2. Unless it’s brilliant sunshine, face the direction of the sun

I took these pictures in failing light, and that was partly to try and achieve the best pictures I could in not-ideal conditions. If it’s cloudy, or the sun is setting, the amount of light that will fall on you is dramatically higher if you face the direction of the sun. So although I’d already done that to some extent in the second picture, the sun was going behind the clouds a lot, so I waited till it got a little brighter, and this was the resulting picture: 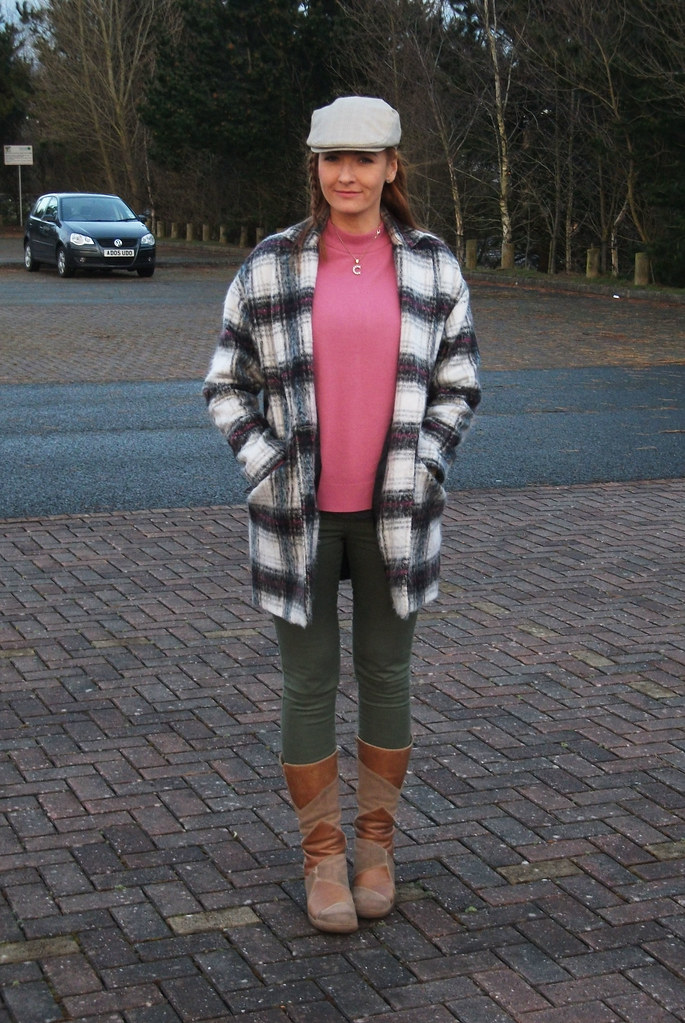 This is much-improved lighting-wise. I stand out more from the background and the colours seem brighter. Be warned though about bright sunlight: you will get very different results facing the sun when it’s very sunny. 90% of the time bright sunlight is deeply unflattering, so stand in the shade if you can and take the photos there. For more tips about shooting in bright sun, read my photo tips post How to Get the Best Results in Bright Sunlight.

But once again I have a distracting background, so that needs sorting out, too.

3. Stand as far away from your background as possible, or choose an uncluttered one

One main difference between a point-and-shoot camera and a DSLR with a fast lens is that it’s harder to achieve those lovely blurry backgrounds, known as bokeh. (Read my post about specifically how to achieve bokeh here.) Most point-and-shoot cameras don’t have such good quality lenses, and a disadvantage of a slower lens is that it focuses on a larger area in front of and behind the subject; therefore, you’ll rarely get blurry backgrounds. So work with this, and aim to shoot in front of less cluttered backgrounds, and stand further away from everything.

I moved away from the cars in this car park, and stood in front of an area of cross-hatchings which gave some nice perspective (roads or paths disappearing off into the distance give the same effect): The other alternative, which a lot of bloggers do, is to stand right in front of something very plain like a wall where you don’t have to worry about trying to achieve a blurry background. Be careful of a lot of greenery – trees and bushes can distract from an outfit, especially if it’s patterned.

So this is my before and after – see what a difference a few tweaks have made? It’s much more flattering. My body doesn’t look a weird top-heavy shape, and my legs seem longer. The lighting is hugely improved, too. In the second picture I’m seeing myself more how I actually look. 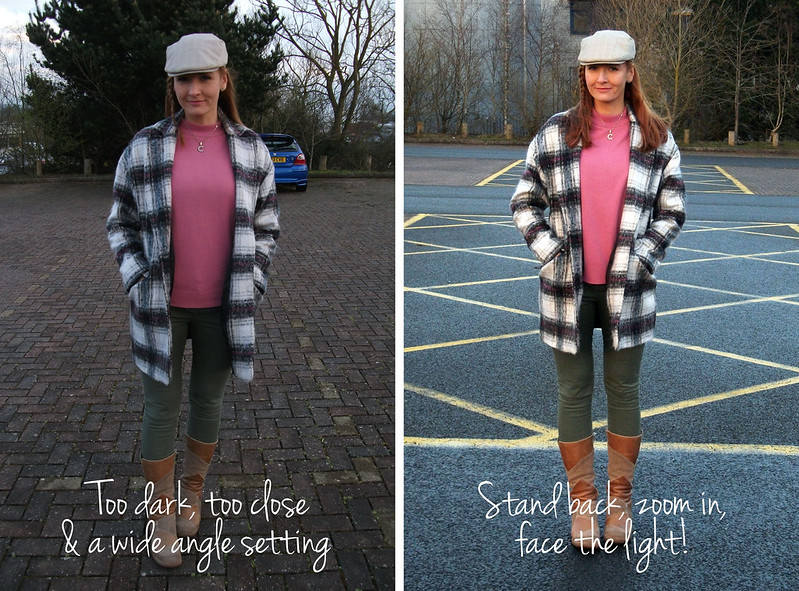 Now that was three tips, I bet you’re thinking “What’s tip number 4?”. This one is vital, because you may be missing out on a really important factor that’ll even improve on the results of my “after” picture enormously. It may not apply to everyone, but you must check it.

4. Check the specification of your camera for the “f stop” number (aperture)

What you’re looking for is a number like “f4” or “f5.6”. The f numbers refer to the size of the hole the lens can open up to (this is the aperture as mentioned in point 1), and the apertures on all camera lenses range from roughly f1.4 (a large hole) to f16 (a small hole). Therefore, the smaller the number of your f stop, the larger the hole – and the better quality, or faster, your lens is. As a general rule, most point-and-shoot cameras go up to a maximum (meaning how large it goes) of f4, and that’s not very fast.

However, if you find that yours says f1.4 or f1.8, you’re very, very lucky. You may well have paid a lot more than the average price of a point-and-shoot, and for good reason. I can’t speak for all models, but if you have a lens that’s capable of a large aperture, then do this right now:

Look up how to use the Aperture Priority setting on your camera, if it has one.

If I could put that in neon with flashing lights all around it, I would. If you have an Aperture Priority, set it to the maximum aperture (remember, small number = large hole = higher quality) that you can, and leave it there. This will do two things:

You may not realise that your camera is able to do this, and if you’re not using it, then the extra money spent on a good quality fast lens has effectively been wasted. Although my point-and-shoot isn’t one of those cameras, I can show you the same shot I then took with my DSLR with a large aperture for comparison: 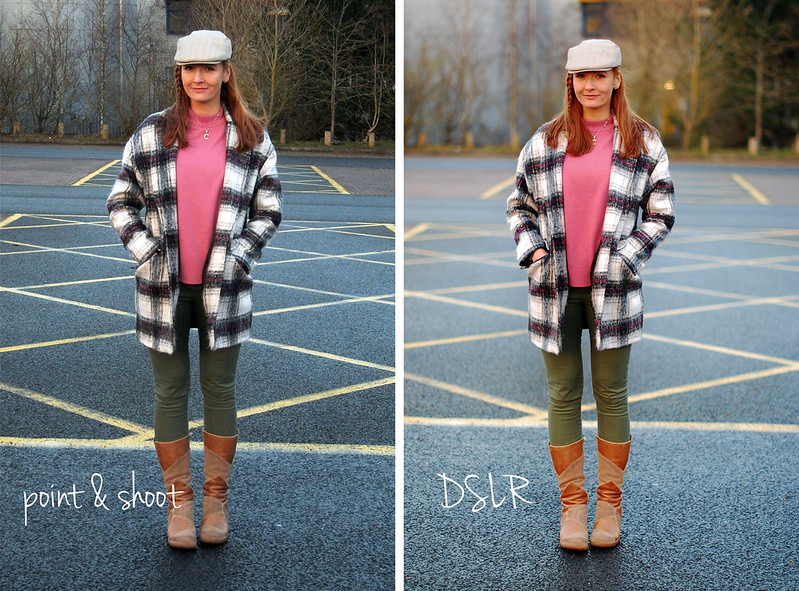 So in theory, this is the difference using a large aperture (f1.4 shown here) will make to your photos. It’s only a rough idea of what it will look like – I’m using two different cameras to prove a point. The blurry background does give the image a beautiful quality, the colours “pop” and I do stand out from the background, but your point-and-shoot may well be capable of similar, depending on how fast its lens is.

All you have to do is:

That’s pretty much it. I knew a lot of bloggers are frustrated with their outfit photos, and I’ve been planning this post for a while to see if my tips might help. Many think they simply have to buy a DSLR to get better results, but that’s not always the case. You may be doing one or all of these things that affect your pictures, so each “trick” will improve them enormously. Do let me know how you get on, and what tips you put into practice – I hope they help!

If you’ve got any questions, do leave a comment and tick the “Notify me” box, or simply Tweet me: @notlamb 🙂