So far in these Photo Tips Friday posts I’ve covered photo quick fix tips and six camera equipment essentials… I know a lot of bloggers have DSLR cameras but have never got round to learning what aperture, ISO or white balance is – let alone how to change them manually. I thought about doing a post on all those things, but too much technical stuff in one go can be somewhat overwhelming…!

I had a think and realised that although there is a lot that will vastly improve photos, there is one main setting that you should learn in order to achieve what I consider the best effect on blog photos: bokeh, which is that lovely blurry background effect. In order to achieve this you need to get to grips with aperture.

Now for those of you who have recoiled in horror – don’t panic! Please don’t shy away from learning this. I guarantee once you understand how this works, you will be changing this setting as a matter of course. (As mentioned in other posts I’m not going to get over-technical, and will try to explain things in layman’s terms as much as possible.)

1. Try this amazing optical trick to see how your eye creates blurry backgrounds (no equipment needed)!

First of all – in optics, an aperture is “a hole or an opening through which light travels”.

Secondly – depth of field is “the distance between the nearest and farthest objects in a scene that appear acceptably sharp in an image”, or more simply, how much is in focus. (Thank you, Wikipedia)

This trick is a really great way to grasp aperture and how it affects depth of field – I was shown it once many, many years ago (I can only assume by one of my photography tutors at college). A lens works in exactly the same way as your eye, so try this simple trick to create your own blurry background:

Stand somewhere with an object at least six feet/2m away from you to look at (don’t stand in front of a wall in other words) – so do this outside or in a big room. I chose the camellia tree in my garden as my distant object. 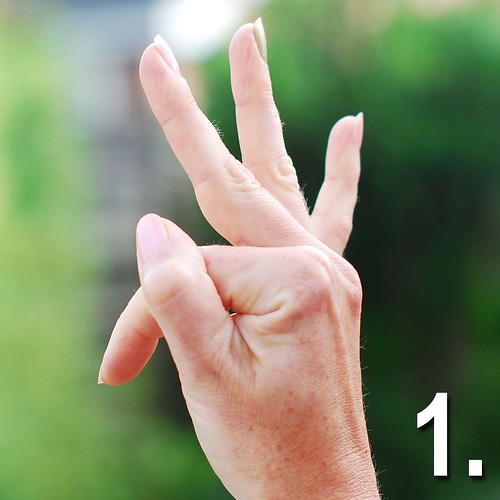 Make a hole with your thumb and index finger; like making an “Okay” sign, but with a tiny hole, as small as you can make it (1), and put the hole your hand is creating right up to your eye and look through. 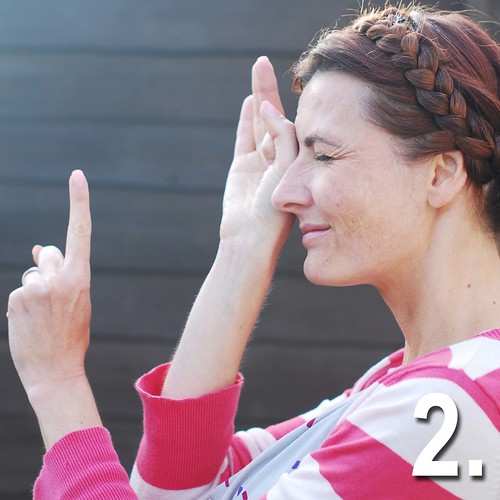 Next, hold up the index finger of your other hand about six inches (15cm) in front of your face (2), making sure you can also see your object just behind it in the distance. The hole should be literally as small as possible, whilst still being able to see your finger and your distant object through it. To you (unlike the photo below), both your finger and the distant object will be in focus (3). 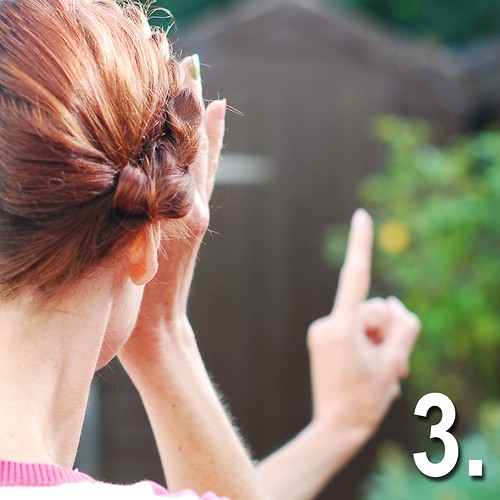 Now, slowly increase the size of the hole your fingers are making, staying focused on your index finger. You will immediately see that your background object goes out of focus, and your finger stays sharp (4): 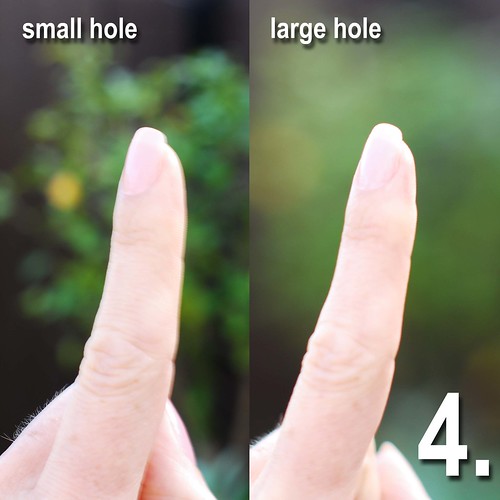 You can then either focus on your finger or the background, but not both. Make the hole smaller again and both will become sharp once more. (In reality, your background object will be a lot sharper than my photo demonstrates when the hole is small, but you get the idea.)

2. Understand how straightforward Aperture is in relation to photography

In photography, aperture simply refers to how big the hole in the lens opens up when you take the picture. The hole size varies according to the f-number, or f-stop (“f” stands for “focal”). 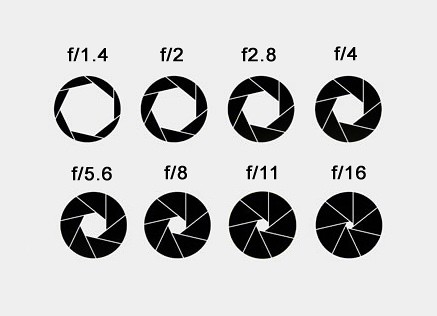 So to create bokeh, you have to use a large aperture (remember it’s a small number). Whatever you focus on will be sharp, and any far away objects will be beautifully blurry. This of course you know because you have just created your own bokeh with your optical trick!

3. Compare the same image taken on Auto and on Aperture priority

These two outfit photos from my last post demonstrate different f-stops and the difference they make. The first “before” photo was taken on the camera’s auto setting which chose f5.6 (we’d forgotten to set it back to aperture priority before shooting), and the second “after” photo was taken with a manually set, large aperture of f1.4: Compare them side by side: Can you see how much richer the colours are with a large aperture? Also, the highlights are brighter, the shadows are deeper and of course the background is blurry. Even my skin tone looks warmer. I’m competing with the background in the before photo and it looks flat; a much deeper, almost 3D effect is created in the after photo.

I haven’t changed the brightness or anything like that and the lighting (sun) didn’t change… it is simply down to the large aperture letting in more light, and photographic lenses like light. My outfit pops right out of the picture and doesn’t blend into the sharp background like it does on the auto setting.

4. Check the maximum f-stop (speed) of your lens

In my camera equipment essentials post, I stressed that a fast lens is what you should buy if you want to spend your money wisely on a lens for shooting blog photos – bokeh is the reason why. The larger the aperture of a lens – in other words, one that goes to f2, or preferably f1.4 – the “faster” the lens is. Unfortunately (and perhaps unsurprisingly), the fastest lenses are the most expensive. Off-the-peg DSLR cameras nearly always come with a slow zoom lens, often with a maximum aperture of only f5.6. You will a) never achieve really great bokeh with this aperture, and b) you won’t be able to shoot successfully in low light conditions because the aperture simply won’t go large enough to let in enough light for a decent shot.

5. Buy a fast lens if you can and find out how to set your aperture priority

6. Use the Portrait or Macro mode on a compact (point-and-shoot) camera

Although not ideal, all is not lost if you have a compact camera. Most compact cameras these days have various modes for different shooting situations, for example Landscape, Night Time, Macro (close-up) and Portrait. If you’ve got these settings, experiment. What you want to try are the Portrait and Macro settings:

Portrait mode usually sets a large aperture to create background blur; the idea being that the background goes out of focus so the attention is on the subject. It won’t be as dramatic or as good quality as using a DSLR, but it should be an improvement on the automatic setting. If you find that Portrait mode doesn’t give you a blurry enough background for your liking, experiment with Macro mode.

In Macro, your camera will choose a larger aperture (a smaller f-stop) and let you focus on an extremely close-up subject, so it’s ideal for details shots like accessories. The drawback with Macro is that you’ll need to photograph up close, so unfortunately it’s not good for full-length shots. The best thing to do is to try it – Macro can sometimes be a useful setting in portrait shots.


7. Create space between you and your background

This applies whichever camera or lens you use. After either setting a large aperture or setting your compact to Portrait, you have to make sure you do not have distracting or nearby objects in the foreground. The emptier the foreground and the further away the background, the better the bokeh effect. My favourites are roads winding off into the distance and standing in the middle of an empty field or car park.


I hope this helped you guys if you were wondering how the bokeh effect was created and/or bewildered by aperture and f-stops. And in case you’re wondering, there is debate over how bokeh is pronounced. I think the most accepted pronunciation is “bo-ke” (like the “Ke” of Kenneth), with no emphasis on either syllable.

Let me know how you get on!