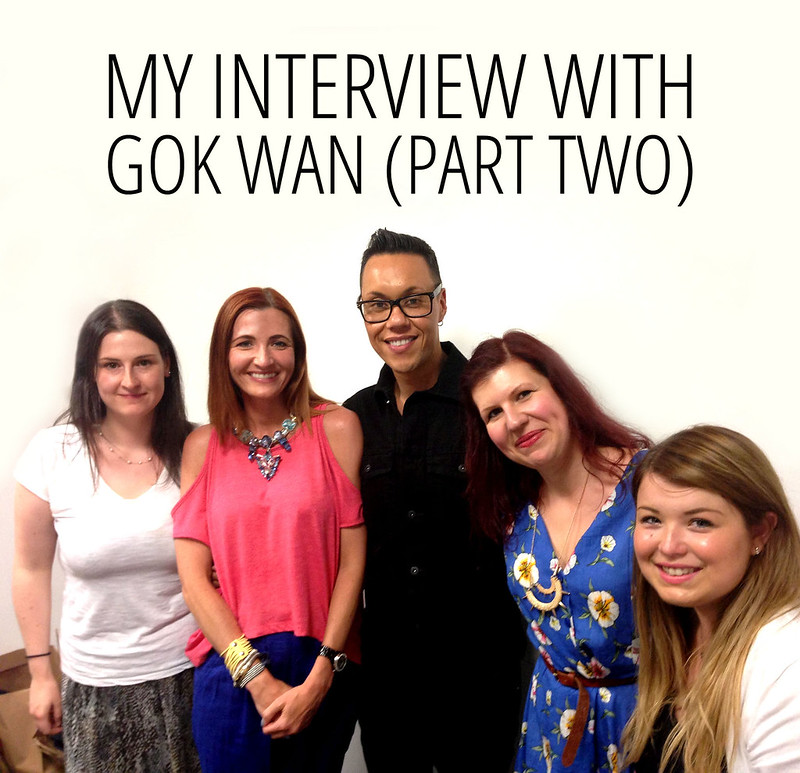 Finally – here’s part two of my interview with stylist, author and TV presenter Gok Wan! I was lucky enough to be invited as a VIP (along with four other bloggers) by Activia UK to attend their Feel Good From Within campaign event in Westfield, London the other week. I split the interview into two parts as we talked about so much – you can read part one here, which covered weight loss, self esteem for teens and 40+ women, plastic surgery, and live TV.

This second part is just as fascinating, and we covered seeking validation, make up, why we blog and his favourite Gok TV shows, amongst other things. (See photo below for the other blogger’ names and links 🙂

The conversation turned to blogging, and how it’s related to self esteem. Tamsin was discussing how she reacts to (positive) comments, and how blogging is a way of helping yourself get over self-esteem issues and something we like to do to help other people.

GOK: I don’t think it would be unusual or unacceptable to look for validation by having a public job. I’m sure that Madonna or Beyonce don’t only write songs for themselves, or that Britney Spears doesn’t put on a sequin leotard just for herself. It is about validation; my job is about validation. I go outside and meet loads of people, of course I feel good about myself: I’ve just been told I’ve been loved for the past two hours – it’s a lovely feeling! But I wouldn’t worry about that; I think all of us have part of the showman about ourselves, especially if you’re a blogger, and you have followers, and it’s all about people. Just the word “following” – it’s quite tribalistic, isn’t it.

IT IS ABOUT VALIDATION… ALL OF US HAVE PART OF THE SHOWMAN ABOUT OURSELVES, ESPECIALLY IF YOU’RE A BLOGGER.

GOK: But you kind of are, because they follow you for a reason. 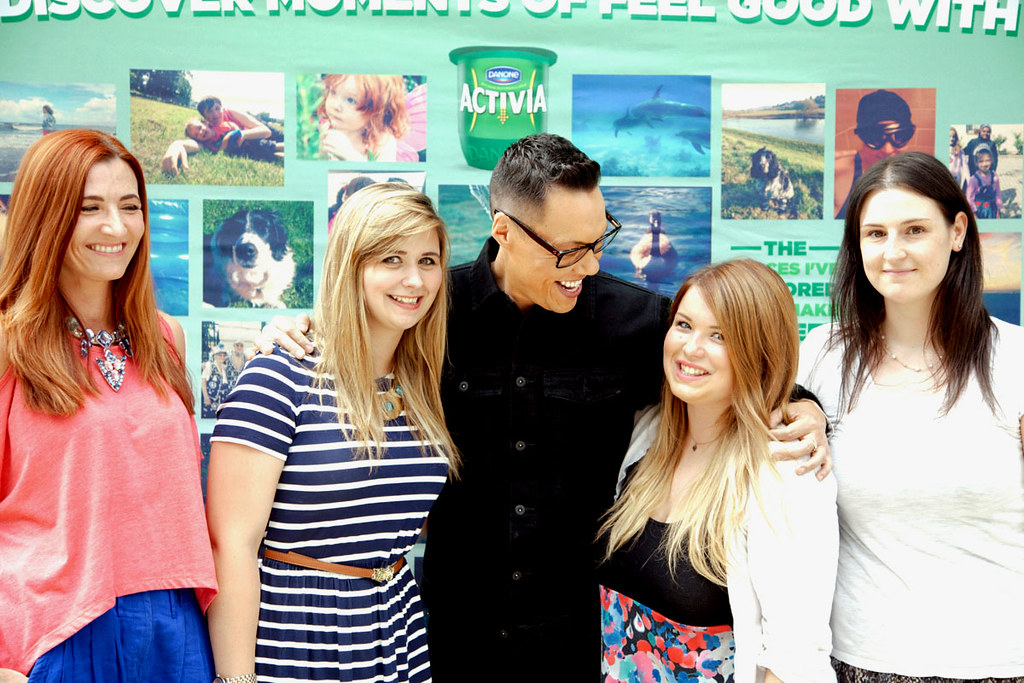 L-R: Me, Lauren of Lauren Ella, Gok, Tamsin of Little Glitter, Dannii of Hungry Healthy Happy. (Laura of Keeping Healthy Getting Stylish also attended but she missed this photo shoot, she’s in the top picture.)

TAMSIN: But I never thought that people would follow me! It’s always a bit of a surprise – every time that someone comments, I’m always really chuffed that they’ve found something that they like.

GOK: So it is validation?! [laughs] What I’m saying is that it’s fine to feel that way, it’s a really good thing because you get self-esteem in lots of different things. Doing make up, for instance. You actually don’t see your make up! If you think about it, you do your make up and you don’t actually see it.

YOU GET SELF-ESTEEM IN LOTS OF DIFFERENT THINGS… YOU DO YOUR MAKE UP AND YOU DON’T ACTUALLY SEE IT.

CATHERINE: Ahh… so why then does it make you feel so much better?

GOK: You don’t! It’s validation, because other people see it.

CATHERINE: I never thought about that…

CATHERINE: But I’m sure I can tell whether I’ve got it on or not.

GOK: Of course you can. But you aren’t ever facing your face – you can’t face your face. Even when you look in the mirror, what you see isn’t accurate; your psyche tells your brain what you want to think of, so you miss different things. We never ever wear make up for ourselves. When I put make up on it’s not for me, it’s about validation because I’m always facing other people, I never face myself. So we’ve worked out from today it’s all about validation…!

TAMSIN: Maybe that’s why we all have blogs!

GOK: If you think about it, the internet has given the entire world a voice. Twitter has given access, Facebook has given community, having a blog has given you a voice. And whether you’ve got anybody following you or not it doesn’t matter, you’ve put your voice out there – we’ve never had that before. Years ago people would have to go and stand in Hyde Park on a box to be heard if they had an opinion. But if you think about the internet now – all of us at some point search for validation by what we do because we put our message out there.

ALL OF US AT SOME POINT SEARCH FOR VALIDATION BY WHAT WE DO BECAUSE WE PUT OUR MESSAGE OUT THERE.

And taking it back to Activia, and feeling good from within, if you think about what we do and the plain, physical action of just holding up a board that told the world what makes us feel good – that’s validation. There’s nothing wrong with that whatsoever, because it makes you feel good. 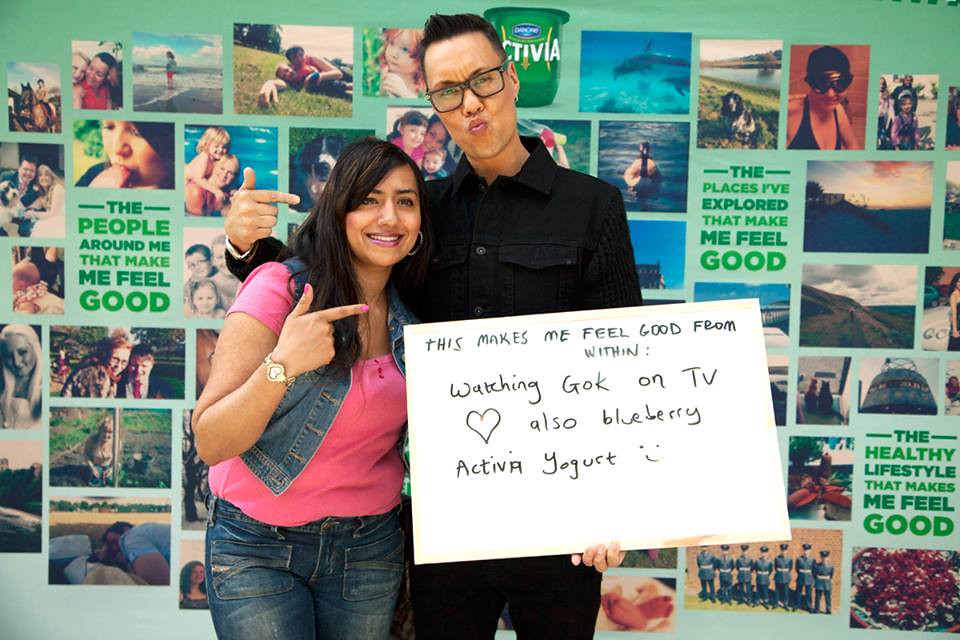 I tell people to wear heels, and skirts, and dresses, and magic underwear – it’s only about validation, because at the end of the day it’s not going to change your life…!

LAUREN: What trend would you say, either something that’s quite classic or trend-led, is universally flattering, that suits people – not just supermodels?

GOK: I don’t think all trends suit all people; one of my philosophies has always been if it doesn’t suit your body shape, find something else and don’t kill yourself over it.

IF IT DOESN’T SUIT YOUR BODY SHAPE, FIND SOMETHING ELSE AND DON’T KILL YOURSELF OVER IT.

But I think one of the sexiest eras for women, because it was about empowerment and fine dressing and was all feminist-led, was the 1940s. It was about the cut and that, I think, was really beautiful. It had very heavy tailoring and great materials – and especially for British women with the British shape as well, it’s very flattering.

TAMSIN: Do you read any blogs?

GOK: I don’t. I’ll tell you why – it’s because I have to have my own opinion, and so I don’t read magazines. I have all of them, and I look at them, but I don’t read any of them. If you were an actor, and you’re doing Oliver, for instance… I wouldn’t be the type of actor that would watch the original Oliver, because I know that my opinion would be soured. Because a lot of my job is about being an authority, whether it’s about fashion, or style, or self-confidence or whatever, a lot of people listen to what I say and quote what I say – if I’ve suddenly got 25 different opinions about a subject in my head, I would find it very hard to work out what my opinion was. So purposely I don’t do that. I don’t know whether it’s to my detriment or to my aid, but it seems to have worked so far.

LAUREN: What has been the favourite show that you’ve worked on – has there been a favourite?

GOK: That’s really hard. I’ve loved all of them; some of them have been harder than others to make. I think there’s been some standout shows that have changed me personally. Making Kelly Chamberlain’s How To Look Good Naked about breast cancer was a big change – that was very hard but hugely rewarding. Di Cram, who was another How To Look Good Naked, was blind; that was quite a remarkable journey to go on. Doing the kids show – Gok’s teens – was unbelievable. Going back to China, doing Made in China, was a big thing – and doing the live shows, because I’d never done live before.

So they’re all for different reasons, lots of different personal journeys that you go on when you make shows, you invest so much of your own personality in it. A lot of my opinions have changed over making those shows, and that’s a unique position to be in; not many people get that opportunity, to go on a road of self-indulgent personal self discovery… it’s amazing.

A LOT OF MY OPINIONS HAVE CHANGED OVER MAKING THOSE SHOWS, AND THAT’S A UNIQUE POSITION TO BE IN.

TAMSIN: I bet seeing the other person’s reaction or their happiness, the overwhelming change that’s brought round for them, must be [amazing] also.

GOK: It’s a weird one, because when you make the shows you don’t really feel it like that – it’s not like a kick in the face, because you’ve watched that change over weeks. When you edit it into a programme it’s sudden, it’s always really shocking. But it is a gradual change, and by the end of it you can’t even remember them not liking themselves… quite remarkable.

I really hope you’ve enjoyed reading what Gok had to say on all these subjects – he was so forthcoming, insightful, and of course every bit as lovely as I hoped he’d be. It was a fabulous opportunity to get to meet him as well as be able to spend so much time talking to him.

Not only that – he signed my mum’s copy of his autobiography and spoke to my friends’  teenage daughter on my phone (she’s a massive fan). Now that’s deserving of the label “national treasure”, in my eyes…!

What do you think – have you learned anything or had your eyes opened on any of these subjects..? I know I have 🙂