A few firsts for my blog: menswear ideas on how to style a blue-gold suit, the first post taken over entirely by my husband, and outfits photos shot entirely by yours truly. I hope you’ll take a minute to check out these images of a beautiful suit that I styled for him and actually got to photograph – it was great to flex my photography skills for a change.

I was approached by retro and mod menswear brand Adaptor Clothing, who wanted to know if I wanted to get behind the camera for a change and style my other half in a suit and shirt. As many of you know I did a photography degree and once wanted to be a fashion photographer, so there was no way I was going to let this chance slip through my fingers. The question was, did I still have an eye for it?


The suit we chose is the Adaptor Mod 60’s Retro 3 Button Slim Suit – although it looks blue-grey, the colour is actually blue-gold. It has a beautiful gold sheen to it when you catch it in the light, and we both agreed that for a ready-made suit the quality is just wonderful, and the retro detailing and slim trouser legs definitely give it that Mad Men feel. The shirt we chose was a classic Oxford white button-down by Ben Sherman, which was also a really good quality shirt. After much trying-on of different ties we decided to go tie-less in the end, and added simple but striking details with a plain white pocket square and red socks with tan brogues. And scroll down for the chance to win one of two of these white Oxford shirts in my giveaway! 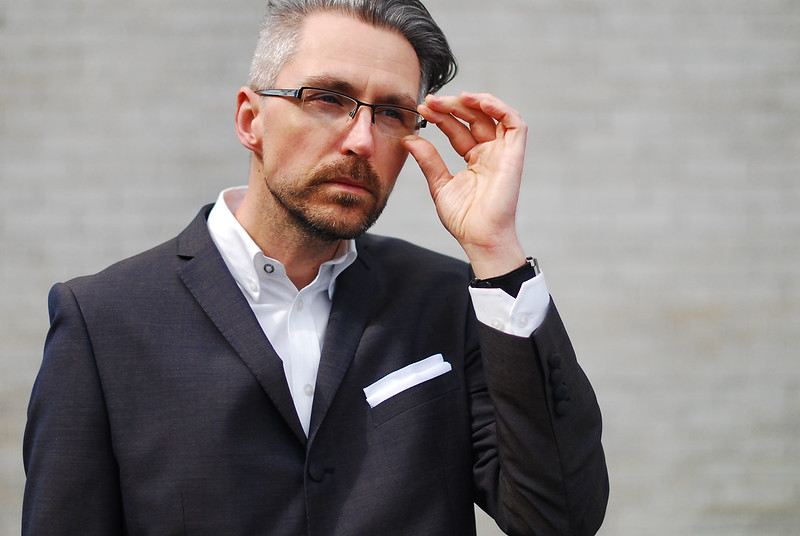 I’d like to think I haven’t completely lost my touch as I’m pretty pleased with these pictures (I apologise for my inability to cut them down to my usual four or five) – and I have to say, I think Mr. Summers has somewhat upstaged me. On his first ever appearance, as well… le sigh. I’ve totally gained my own mini Zoolander – he said he didn’t know how to pose and of course I gave him direction, but he does look like he’s been doing this for years. Many thanks to Adaptor Clothing for giving me the opportunity to both style and photograph a shoot for a change, and of course for the fabulous shirt and suit – we had a lot of fun, even though it took ten times longer than my outfit shoots do 🙂

How would you like the chance to win one of these classic white Oxford shirts? I have two to giveaway (both size Large, 16.5″ collar, for up to a 42″ chest) – all you have to do is enter via the widget below… good luck!

Have you ever featured your other half on your blog – if so, how did it go (him modelling and you photographing)? And did you ever think there’s maybe more to life than being really, really, really ridiculously good looking? (I do hope that joke’s not lost on anyone…)