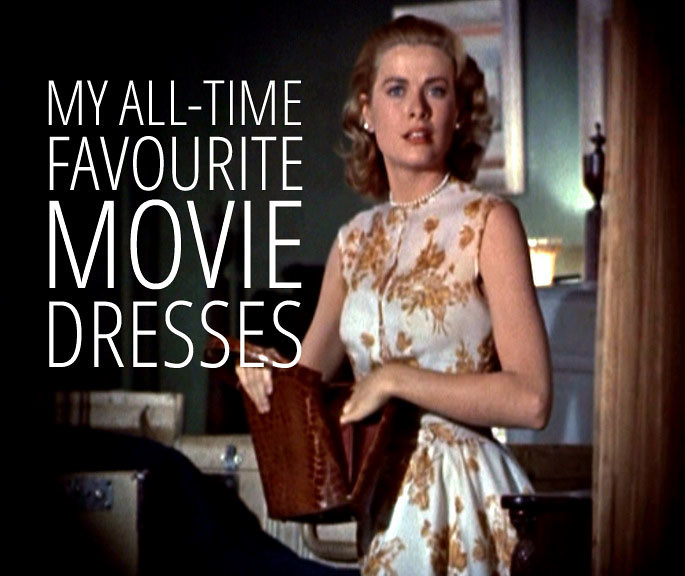 Since I was small, I’ve loved watching movies for the clothes that were worn in them as much as the movies themselves. It’s safe to say I’ve probably always had a Top Ten of silver screen outfits milling around in my head – and it’s the iconic movie dresses that sell for hundreds of thousands of dollars (or millions) at auction and inspire endless copycat recreations. Think of some of the most well-known ones: a blue and white gingham pinafore dress? The Wizard of Oz. A backless, floor-length emerald beauty with spaghetti straps? Atonement. An ivory pleated halter neck (accessorised with a subway grate)? The Seven Year Itch.

So in partnership with the Jacques Vert Collection Available from John Lewis, I thought I’d share just a small selection of what I personally consider some of the most fabulous – and memorable – movie dresses of all time. These five show how modern designs often have more than a hint of nostalgia about them, and recreating these iconic looks is easy with these gorgeous, easy-to-wear designs!

Which of these silver screen looks is your favourite – and what’s your number one movie outfit of all time? Let me know in the comments! 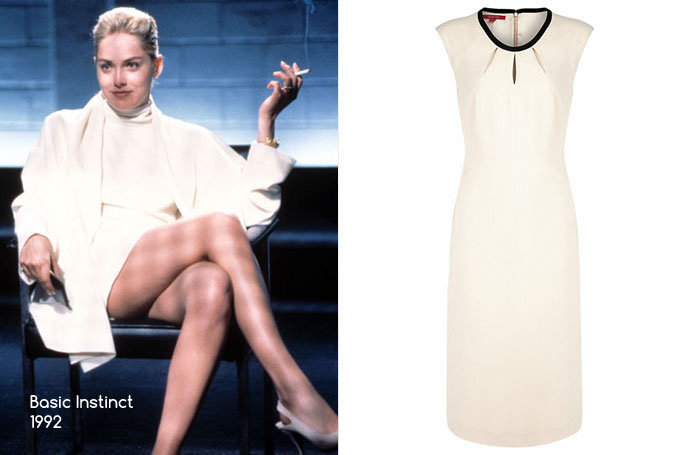 I was 20 when Basic Instinct came out at the cinema, and I can recall drooling over Sharon Stone’s uber-chic minimalist wardrobe. She was as cool and sophisticated as I was grungy (well I was an art college student at the time), and apart from the er, obvious reason this scene was famous*, it should also be remembered for her stunning white dress and coat ensemble. This cream Jacques Vert Powder Puff Shift Dress is a beautiful, very wearable version (I think the round neck and longer hemline are actually more flattering for most of us than her short shift with a roll-neck) – I’m loving the black trim and the pleat detail at the neck.

*If you don’t know what I’m referring to, then Google “Basic Instinct interrogation scene”. I wouldn’t recommend it to the very easily shocked, however. 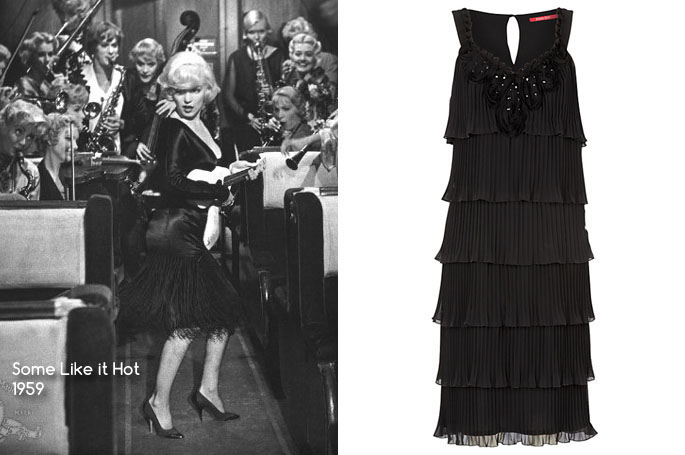 You wouldn’t think that Marilyn Monroe could pull off a 1920s flapper look, but she sure rocked her own version in Some Like It Hot (1959), pouring her curves into a figure-hugging tassle dress. Due to The Great Gatsby remake, the flapper look has been huge this year, and the stunning Jacques Vert Beaded Black Dress has the tiers and beads that capture Twenties chic beautifully. If you wanted to go full-on Sugar Kane, you could even get yourself a ukulele to really complete the look…! 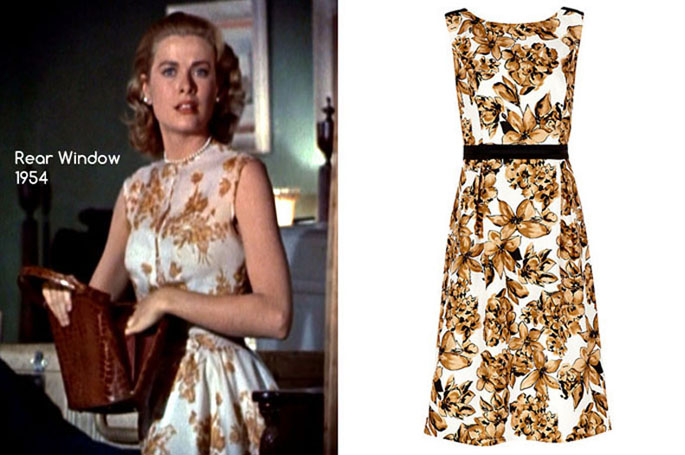 Grace Kelly was the epitome of class, and she oozed style and sophistication. In the brilliant Hitchcock classic Rear Window she wore a typical 50s floral dress with a pearl choker, and this Jacques Vert Statement Floral Dress is a dead ringer for it. I have a sneaking suspicion that she may be holding a Hermès Kelly bag in this scene – the film was made around the time the bag was named after her. So if you’ve got a spare $6,000(!) lying around then you too could be the proud owner of a brand new Grace Kelly classic…! 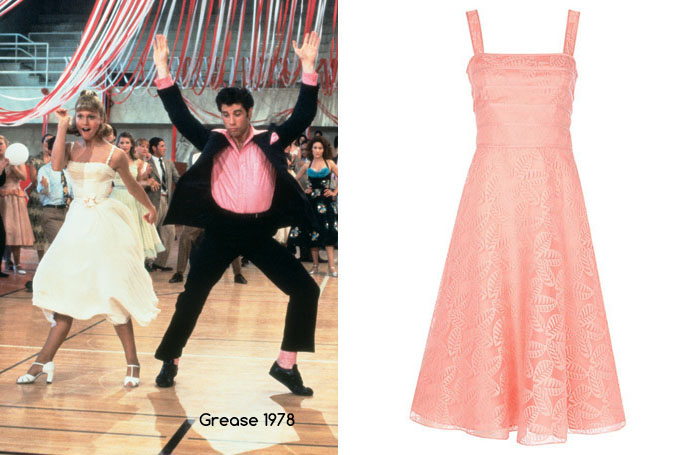 As soon as I saw the Jacques Vert Organza Leaf Dress I thought of the prom dance scene in Grease, and the pale creamy-yellow sundress that Sandy wore whilst dancing with Danny Zuko. (She was, of course, cruelly robbed of winning the dance contest because of that scheming Cha Cha DiGregorio – I loved the character of Sandy when I was a kid, and I never quite got over Danny’s betrayal. I was gutted for her.) At the beginning of the scene she wore a really cute sheer cape, so the addition of a rose corsage at the waist, some chunky T-bar sandals and an embellished cape to this peach sundress makes it so retro prom-style. 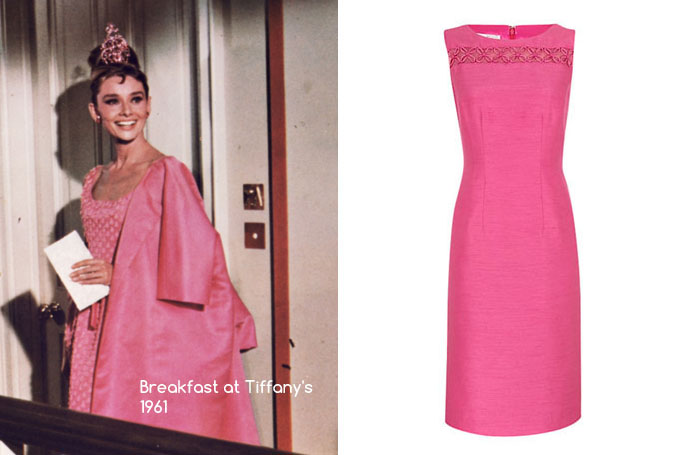 Audrey Hepburn in Breakfast at Tiffany’s. Is there a more iconic movie character in terms of fashion history? You couldn’t have a “best movie dresses” list without including examples from Blake Edwards’s pièce de résistance, Fred darling. It’s simply too gruesome…! I’m sure most people would immediately think of the long black Givenchy masterpiece in the opening credits, but I personally always preferred the pink dress she wore with the towering pink tiara and pink satin coat. The Jacques Vert Shimmer Shift Dress in Fuchsia is the perfect shade of pink for a modern recreation of this look, and paired with some of the pieces below you’ve got yourself a Holly Golightly-inspired outfit right there – and don’t you forget it!

(I’ve seen the film a lot, so apologies for the Holly Golightly-isms – I just couldn’t help it…!)

Photos: Rear Window, Basic Instinct, Some Like It Hot, Grease, Breakfast at Tiffanys

This post was written in collaboration with John Lewis. All opinions are my own, however, and 100% honest.